2019--The Year That Wrestling Was Reborn

Just a few months ago I was not alone in the thought process that wrestling as we knew it was dead. Thanks to the stagnation of a company that so many of us grew up on and supported over the years, there wasn't much to be excited about. Everything from the storylines to the shows themselves have been formulaic for years if not decades. An alternative has been long overdue. While there have been other options in recent years, over the past month two new entities have given wrestling fans hope in what can only be described as a true rebirth of the squared circle.

For over a year die hard and casual fans alike have been abuzz over the company that would become All Elite Wrestling. The promotion, led most visibly by Cody Rhodes, has managed to ostensibly pick up where WCW Nitro left off on TNT nearly two decades ago. With an underlying theme of giving the fans what they yearn for in a wrestling promotion, Rhodes, The Young Bucks, and Kenny Omega are leading a band of relatively young talent who are tearing up rings on both cable and YouTube. Peppered with veterans like Chris Jericho, Dustin Rhodes, and Jake Hager (the former Jack Swagger), the company has enough name value to attract fans who don't necessarily follow the indy scene and its darlings.

Attending their fourth television taping in Pittsburgh, I was pleased to see that the atmosphere was completely different from similar events held by WWE in the past umpteen years. Fans were engaged throughout the show with very few backstage skits for the live crowd to be bored by. With a few exceptions, each individual character seemed to be someone that the audience was invested in. Perhaps the latter two dark matches (all of which air on AEW Dark, a YouTube program) were out of place in terms of match order, but I can't imagine that any fan left feeling ripped off. 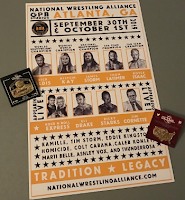 While I enjoy AEW, I feel that more variety is needed on their roster. There's a place for "flippy" wrestling, but at this point there's just too much of it from match to match. This critique brings me to what is my current favorite wrestling program, NWA Powerrr. The brainchild of current NWA owner Billy Corgan, NWA Powerrr is a weekly one hour studio wrestling program in the grand tradition before the sport moved completely to arenas. The first taping occurred over two nights with about eight weeks worth of shows completed. Those shows air for free viewing on YouTube. 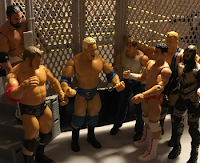 I'm not only biased towards NWA Powerrr due to the classic format, but I truly enjoy the variety of talent presented as well. Up and comers are coupled with guys like current NWA World Heavyweight Champion Nick Aldis, Cowboy James Storm, Aron Stevens (the former Damien Sandow), Trevor Murdoch, and Ken Anderson. All of the names that I just mentioned are men who never quite seemed to get their due previously on the national scene. They thrive here, drudging up memories of stars from the '70s and '80s who once plied their trade in very similar studios. Sure there's a lot of jaw-jacking going on, but it helps to invest you into the issues that these stars are fighting over. These aren't silly skits over stolen wives and high school boyfriend-girlfriend drama. These are issues over being the best in the business, aka winning championships and having integrity.

Due to the length of the episodes, NWA Powerrr keeps you wanting just a bit more as the classic wrestling television shows did. Seeing as that the promotion will be looking to pay-per-view buy rates for success, this is exactly what they need to do. Along with AEW, so far there has been little presented to insult the viewers intelligence. I'm not ashamed to suggest trying either program to lapsed fans. That's something that I haven't been able to say in a long while. As far as AEW goes, who doesn't want to give it a try once they find out that Tony Schiavone is back in the fold? Speaking of the former voice of WCW, he may just be the MVP of the professional wrestling world in 2019. Who would've imagined that? 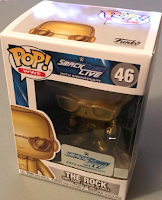 Is WWE dead? Not by a long shot. Due to SmackDown moving to Fox and a general feeling of the beginning of a new era, I tuned into both that program as well as Raw for the first time in two years. I have to say that neither program is truly for me anymore, but that may not be the same for everyone. NXT remains a fun product, though it still has the looming overproduced feeling of WWE. Regardless, the company as a whole is home to many amazing talents who deserve admiration and support. WWE also has the best female roster going which really shouldn't be a surprise due to the immense size of the company.

The talent throughout the entire wrestling world is a huge part of what makes this new era so exciting. One of the biggest thrills of being a wrestling fan when there were different viable options promotion-wise was to see where the stars would end up next. We now have chances for those "what ifs" to happen again. It's truly an exciting time and a throwback in every sense of the word.

And how about merchandise? So far we have a lot of t-shirts. There are also a lot of enamel pins, the coolest two being that of the NWA World and National Heavyweight Titles. Certainly with all of the national buzz I see an action figure deal coming for AEW sooner than later. With its unique format, it's a bit more difficult to see what lies ahead in memorabilia as far as NWA Powerrr, but my mind runs wild at the thought. If ECW could have a toy line, so can the little studio wrestling show that could!

I am positively energized as a wrestling fan. That is a sentence I could not have imagined typing just a few short months ago. There truly is something for everyone out there now. From AEW and the NWA to WWE and all of its many brands. MLW is making headway and Impact Wrestling is still chugging along as what almost seems to be an island of misfit toys. ROH is still running, though with considerably less buzz, and I have a feeling that NJPW is about to challenge AEW by diving even further into the American market. And hey, don't forget about lucha libre!

In the decade since the company acquired the WWE license, Mattel has tried seemingly countless lines to further the brand. The three most successful have been the ones so closely intertwined due to scale, those being the Elite, Basic, and Battle Pack (two-pack) lines. Aside from varying articulation, the figures are interchangeable. Due to this, Mattel has become quite a formidable rival to the vast variety offered by Jakks during their time with WWE. While that company had a much deeper roster of Legends thanks to the beloved Classic Superstars line, they did not have nearly the amount of current stars to create. Mattel has superstars from Raw, Smackdown, and NXT to produce, not to mention the stars of 205 Live and NXT UK. 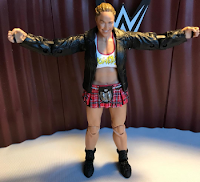 In 2019 Mattel has introduced yet another line that, while fitting with the aforementioned Basic and Elite figures, ups the price point and, hopefully for Mattel, the desirability of re-releasing previously made characters. This is the "Ultimate Edition" figure series. At a price of around $30 per figure, Mattel is selling it as the ultimate in articulation for a figure as well as a way to package many different interchangeable parts with the figure thus creating different looks. The first series of two includes The Ultimate Warrior and Ronda Rousey. 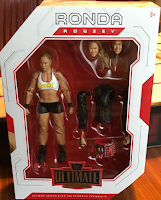 Rousey was a polarizing figure in WWE for sure. I never had much of a problem with her being there, but I never felt that she added much to the product, either. This was at a time (continuing to this day) where I loosely watch at best, but her charisma seemed much more suited for the world of MMA than WWE. That being said, nothing that she did really put me off, either. Considering that her connection with "Rowdy" Roddy Piper was legitimate (unlike other current stars that WWE has attempted to link to legends), that was also fine with me. She was simply there. Another name. And here we have two or three of her signature looks in one figure. 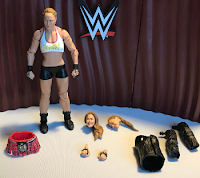 The packaging is large but does show off everything that's included. Heads, arms, hands, a jacket, and her kilt. Opening the package wasn't as easy as opening an Elite. In fact it was a bit annoying. It's a nice window box, but maybe a tad too big. Once open, it is fun to lay out and think of what combinations can be made. To my knowledge, this is the only way as of press time to have a Ronda in pre-match entrance gear. While there was a Ronda figure with the jacket and one in wrestling gear, I think that this is the only one with the ponytail, jacket, and wrestling gear combined. 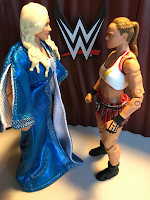 All of the Ronda figures have been spot on with the face, so all three of the heads are good here. The heads and arms aren't too difficult to change, but I had a bit of an issue with getting one of the jacket arms to stay on. Honestly, I'd rather have a soft goods jacket. Almost always. With any figure. It's just easier. The extra articulation in the arms really doesn't do much for me either. It doesn't look bad, but is it really necessary? Maybe there's a certain niche audience that Mattel is looking for here who wants that, but I'm more about the ease of changing the look of the figure with a product like this. 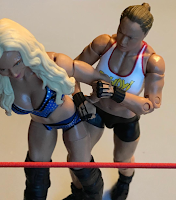 It's a nice figure, but not worth $30. I paid a sale price much closer to the cost of an Elite, which felt more reasonable. With the inclusion of extra hands, heads, and other parts in many of the Elite figures, it's really the extra articulation that should be considered for the price jump. Since I'm not concerned with it, that's simply not worth it to me. Aside from the first Basic of Ronda which seemed like a rush job (though unique as she's simply in her white t-shirt and pants), I held off on her other figures until this one was released. I'm glad that I did, but I don't feel any urge to pick up Bret Hart, Shinsuke Nakamura, Finn Balor, Triple H, or anyone else who may show up in the line as of yet.

The "Ultimate" Ronda figure? Yes. An ultimate pass for the rest as far as the foreseeable future.
Posted by J\/\/ at 7:00 PM 1 comment: