Wrestling MarketWatch: The Hall of Famers

In the recurring "Wrestling MarketWatch" series we try to combine the latest going rates for various collectibles with a common theme. What better, and timely, theme this week than Hall of Famers?

Just because a Hall of Fame superstar is on an item doesn't necessarily mean that it will become valuable, but it's certainly fun to see what people are willing to pay for certain collectibles. As always, I remind you that just because an item brings in a certain amount of money one time doesn't mean that it will do the same in the future. Remember, collect for you...not for your wallet.

I also ask that you keep in mind that the items shown are from my own collection and some are autographed. The prices listed were for unsigned examples unless otherwise noted.

*What better way to start than with items that could be in a Hall of Fame themselves--a toy Hall of Fame, that is. To many, the WWF LJN line is the ultimate wrestling figure series. It's certainly one of the earliest, contains many of the most beloved names ever to enter the squared circle, and the sheer size and presentation of the figures makes them stand above all others.

Values have remained somewhat steady for the line for about twenty years now. Loose common figures (Piper, Volkoff, Sheik) go for very little while any carded example rarely goes for less than $40. Some figures in the line have the potential to sell for well over $1,000. 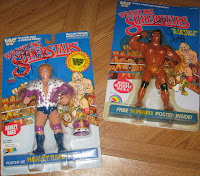 Figures of two Hall of Famers recently caught my attention as far as auction price. Carded examples of Harley Race and Jimmy Snuka recently sold for $204.49 and $199.99 respectively. While both have always been sought after, it seems that "The King" and "Superfly" are in extra demand as of late. It should be noted that the cardback of the Snuka figure was "unpunched." The early LJN figures had a small piece of cardboard that had to be "punched" out in order for them to be displayed on peg hooks in retail stores. Later figures, like Race, had the more common "j-hook." If these early figures still have the extra piece of cardboard, as small as it is, this can be a factor in pricing. 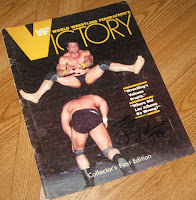 *"Superfly" seems to have found his way onto many desirable items. The very first issue of WWF Victory Magazine (the magazine that WWE claims was their first in-house publication, although as I've informed you, it wasn't) features Snuka performing one of his magnificent leapfrogs over the equally magnificent Don Muraco. These early publications are fun and show a time when the WWF wasn't yet against acknowledging other stars and promotions even though the company was well into the infamous "expansion" era. The magazine, with its iconic cover and full color and gloss, recently sold for $43. 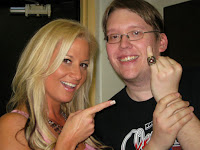 *Back in the world of action figures, we stay classic yet get a little more recent in terms of production. Last year the Hall of Fame welcomed the one and only Sunny. While I did not get to attend the induction in Atlanta, I did get to share in the glory of the one who gets what she wants. Sunny days aside, one of the last "1 of 100" limited figures in the Jakks WWE Classic Superstars line was of the original Diva herself. Equipped with the tag team titles, Sunny is decked out in 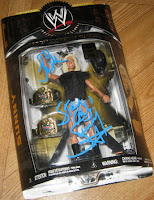 her cowgirl outfit worn while she managed The Smoking Gunns to the belts. Out of all of the figures limited to 100 in the line, this one is still probably the most undervalued. The figure recently sold for $173.99 and I have a feeling that it will only go up in value. After all, she knows you want her.

On the other end of the spectrum of blondes, we bring you another Hall of Famer with golden hair and packaged with a tag team championship.

This would happen to be one of my favorite competitors who is well into his fourth decade in the ring, none other than Greg "The Hammer" Valentine. I've always felt that this figure was one of the most underrated in the line. Not only is it the best likeness we've ever seen of Valentine in figure form, but it also includes his most recognizable robe. An autographed version recently sold for just $17. A steal of a deal considering that it would cost more to obtain the figure at this point and then have the figure autographed.

*There's nothing I'd rather end this installment with than by giving you the bird. Yes, Koko is in the Hall of Fame, but that's not the bird that I had in mind. Albeit a bit early in my eyes, Stone Cold Steve Austin is indeed in the Hall of Fame. He certainly belongs in any wrestling Hall of

Fame due to his impact on the business for a few short years. Heck, if I were ever to begin a wrestling memorabilia Hall of Fame he'd deserve his own wing. Who wasn't wearing an "Austin 3:16" shirt in 1998? If you gave someone "the bird" back in the same time period, chances are it was much better received if you were wearing Stone Cold's foam bird on your hand. Hogan had "yellow fingah." Austin had "black bird." Cena has "purple okay sign." What comes next? Regardless, Austin's finger recently sold for $20 and I can only see this price going up as the years go by. Hold onto those "3:16" shirts, too.

There you have it. A variety of items for a variety of budgets featuring a variety of Hall of Fame superstars. Variety is the spice of life. Remember to check out our Facebook Fanpage for galleries of hundreds of wrestling collectibles and our Twitter feed for the latest blog updates!
Posted by J\/\/ at 9:28 PM