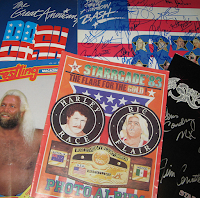 It's almost the Fourth of July! This time of year always gets me to thinking of the magic of Jim Crockett Promotions. It may be true that a lot of the territorial wrestling promotions looked to summer as a time when business was down due to other activities taking up the evenings of the money-paying fan, but JCP changed that. The company and its talent took those long, hot, summer nights and created events that many remember to this day: The Great American Bash. It was a summer get together. Bring the kids! Bring grandma! Bring the beer and brats! It was music, food, the great outdoors, and hard-hitting wrestling action.

In this edition of MarketWatch we'll look at some of the most treasured memorabilia featuring The Great American Bash and other Crockett-promoted events: the publications. JCP produced some very nice all-slick, sometimes even all-color, programs and magazines that showcased their stars in a way that the WWF would later become famous for. The rough, often bloody, action that took place in JCP rings came through the pages making them highly collectible today. If you're a longtime reader, you've seen some of these items before. This time we'll look at some recent selling prices for them. As always, the prices given are for un-autographed copies. 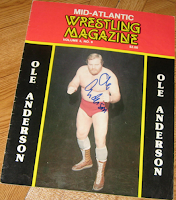 *Jim Crockett Promotions history of high-quality color spectacles in publishing goes back to the legendary Mid-Atlantic Wrestling Magazine. Nearly all of the big stars of the promotion made the cover at one point or another as the production carried on into the 1980's. Ric Flair, Dusty Rhodes, Rowdy Roddy Piper, Ricky Steamboat, Dino Bravo, Blackjack Mulligan, The Mighty Igor, and Greg Valentine are just a few of the names who found themselves on the front page, but none may have looked more menacing than Ole Anderson. The notoriously gruff grappler was featured on the cover several times, but the Volume 4 Number 6 issue has Anderson, by himself, in a full color photo. A copy of this issue recently sold for $30. 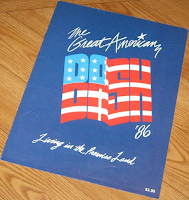 *As mentioned earlier, The Great American Bash may have been the signature event for the company. While Starrcade was positioned as "The Granddaddy of Em All," The Bash, for me, signifies what Jim Crockett Promotions really stood for. In its original form, The Bash was a tour rather than just one event. Many cities and towns, large and small, got to taste live, summer, wrestling action. There will never be wrestling tours of that magnitude again, so taking in as much as we can about "the glory days" from both the wrestlers and the fans who were there is how we can still connect to that era. The '86 Bash tour is still fondly remembered as one of the best. The program from the tour recently sold for $25. 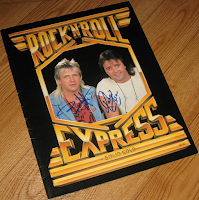 *Speaking of tours, The Rock & Roll Express even had their own offshoot, "The Summer Sizzler Tour." That tour produced its own publication, as did Ricky Morton and Robert Gibson themselves. Jim Crockett Promotions knew that many of the wrestlers had large female followings and produced what could almost be described as photo albums for some of the stars. The Express even had a fan club for a time with high-quality bulletins. One of the publications featuring Morton and Gibson was "The Rock & Roll Express: Solid Gold." This magazine, featuring photos of the boys in and out of the ring, recently sold for $20.50. It should be noted that the sold example had major cover wear. A copy as pictured here would likely fetch a bit more. 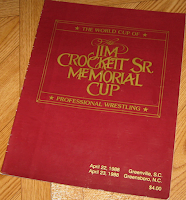 *Another signature JCP event was The Jim Crockett Sr. Memorial Cup Tag Team Tournament. More commonly known as simply "The Crockett Cup," the event was completed in two shows and held from 1986 to 1988. The winners were predictable, but it was still a chance to see interesting match-ups and wrestlers from outside the promotion. Many are hoping that the shows in as complete forms as possible will end up on WWE Network. It could also be said that The Dusty Rhodes Tag Team Classic is a successor to the Crockett Cup. The program from the final Crockett Cup tournament held in 1988 recently sold for $60. 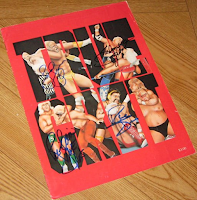 *Jim Crockett Promotions, and many fans, definitely looked at Starrcade as the biggest event of the year. It certainly came before WrestleMania as the industry's biggest supercard, but often had endings that weren't quite as final or conclusive. Some also point to Starrcade being moved out of its original home of the Carolinas as the beginning of the end for the promotion. While I find the latter to be a bit dramatic, something just seems right about Starrcade and Greensboro, NC. After the move to Chicago in 1987, Starrcade came to the more fitting Norfolk, VA in 1988. The program from that event, subtitled "True Gritt," recently sold for $175.50.

It wouldn't be a Fourth of July for me without celebrating Jim Crockett Promotions a bit. Maybe I'll pull up a classic show on WWE Network, schlepp out the programs and magazines, perhaps even the Wonderama trading cards. I'll wrap a Road Warriors or Four Horsemen bandana around my head and cue up "Rock & Roll Is King." It's a great time to revisit that era. It may gone forever, but that's what's great about the kind of memorabilia that we look at here each week. It lets us hop in that time machine for a quick spin without ever leaving our seats.