Fundraising With The Von Erichs 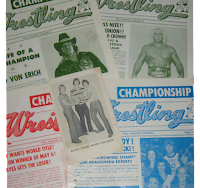 There are some legendary names that pop up on this blog more than others. Bruno Sammartino. Dusty Rhodes. Jerry "The King" Lawler. Rowdy Roddy Piper. Not only are they some of the best of the best, but they also have a ton of great merchandise to write about. A lot of those items are little featured elsewhere. But when you really want to see things that you didn't know existed in the world of wrestling memorabilia, you look to a family name. You point the car towards Texas and you set out to find the once-rabid fans of the Lone Star State's favorite wrestling sons, the Von Erich Family.

Thankfully, many of those fans saved much of the classic Von Erich and WCCW memorabilia of their youth. Those are the same fans, a large percentage of which were female, that you can still see on any episode of World Class Championship Wrestling. Aside from the board game and apparel, much of what was saved could be classified as ephemera. Photos, programs, and even newspaper clippings. If a Von Erich boy was even mentioned, you can bet that the article or blurb was clipped and saved.

Today we're looking at some programs, but not of the traditional style that many are familiar with. These three programs are from cards held at the W.G. Thomas Coliseum and benefited the local high school band. I must admit, I love these things. Not only are they different from most wrestling programs in size and shape, but they capture the fact that, as big as World Class became for a time, the biggest names in the promotion were still working local shows like this.

The three events were held on 3/20/1984, 10/13/1984, and 3/9/1985. Each program lists four matches with ten minute intermissions apparently peppered between each match. The first show featured Ice Man King Parsons vs Super Destroyer, Chris Adams vs Jimmy Garvin, Kerry Von Erich vs Kimala, and Kevin Von Erich vs Michael Hayes. The second included Buck Zumhofe vs Bill Irwin, Ice Man King Parsons vs Norvell Austin, Mike Von Erich vs Gino Hernandez & Andrea The Giant, and Kevin Von Erich vs The Missing Link. The 1985 show had a Captains Match, John Mantel vs One Man Gang, The Fantastics vs The Midnight Express, and Kerry Von Erich vs Gino Hernandez.

What a time capsule these are, maybe even more so than a standard wrestling program. Not only are they full of good quality WCCW promotional photos, there are endless advertisements from the sponsors. An eatery called Clown Hamburger certainly makes their "Double Meat Hamburger Plus French Fries And Medium Drink - Only $2.19" sound delicious. How about BOGO mesquite smoked chopped bar-b-q sandwiches from Buff's Bar-B-Q Barn? And I'd be remiss not to mention that all three programs include a $1.00 off coupon from the local K-Mart Pharmacy on your next prescription. 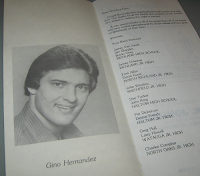 But what about the wrestling? Can you imagine getting to see the legendary Gino Hernandez live? How about his partner, Andrea The Giant? We all know her better as Baby Doll, of course. You know that The Fantastics and The Midnight Express gave it their all in a tag team classic. And seeing the Von Erich's in battle against classic opponents such as Michael Hayes and Kamala? Did the fans in attendance realize what was taking place before their eyes? If they were as rabid as those that were always shown on television, I imagine that they may have.

And as with so many items from the era, you never know when
you're in for a surprise. You've seen these stars being mobbed for autographs on their way to the ring, from the ring, and IN the ring. Those signed items are still out there, you just have to know where to look. Opening to the first page of that 10/13/84 program yielded one of those surprises. A rushed, yet unquestionably authentic, Mike Von Erich autograph. It's even in red pen. 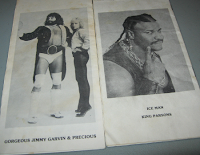 Vintage items like these are what continue to remind me why I love pro wrestling. A few old, wrinkled pieces of paper stapled into a pamphlet can contain a treasure trove of memories. A split second decision could have found these being hauled off to a landfill years ago. Certainly that was the fate of many of these items, but thankfully examples like these have survived. That K-Mart Pharmacy coupon may no longer be valid, but the rest of the value found in these pages will last for eternity.