Remember when "Big Match John" told The Rock that he would never venture out beyond WWE? Well, times have changed. We can't fault him. John Cena has been very successful in branching out into mainstream media. In fact, I would say that it is the one thing that was missing from his career. Sure, WWE fans knew who Cena was. Mention his name to anyone outside of the wrestling bubble and you may have heard otherwise. Thanks to acting, media appearances, and philanthropy, Cena's name gets bigger every day. Now, he's decided to put a little "Elbow Grease" into it. 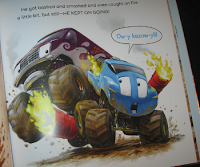 Meet John Cena, children's book author. Random House recently released the first book penned by the champ, entitled "Elbow Grease." Per the back flap, Cena was a big fan of Richard Scarry (as was I) and his beloved line of books for children. The illustrations do remind me a bit of the late author's works, but I don't remember as much dialogue in those. This is a story very reminiscent of Disney's Cars, in looks anyway. 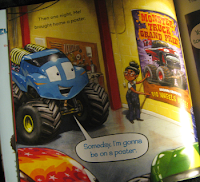 Elbow Grease is the youngest in a family of monster truck brothers. Instead of having any special skills, "Bo" seems to be a smart car, as he needs plugged in at night whereas the other do not. In this short story, Bo decides to step out of his comfort zone and enter the Grand Prix. Despite many obstacles in his way, Bo just won't give up...as you can imagine would be the determination of a main character in a John Cena-penned story. 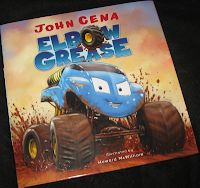 I won't ruin the ending for you, but it is a cute tale with a positive message. You can hear John's voice reading the text in your head. "Elbow Grease" is coffee-table book sized, but otherwise a nice short, children's story in length. The size of the book itself lends to large illustrations, some of which you can lose yourself in while picking out all of the details. Be sure to hunt around in the back of the book for a funny little Easter egg, too. 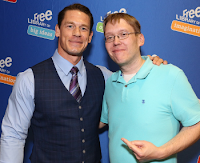 Upon release, Cena went on a short but well-publicized East coast book tour. He used his Today Show appearances to propel the book and likely endeared himself to many parents and grandparents who will now snap up the book for their own kids. Cena is really proving himself to be yet another good spokesman for pro wrestling, even if he is slowly leaving that world. His weight loss during these appearances is said to be attributed to training with Jackie Chan for an upcoming film. 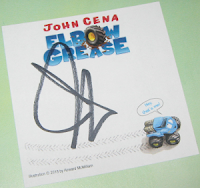 "Elbow Grease" is a fun little tale. I'm not sure if John has anymore children's stories in him, but the characters introduced here could easily be seen on a cartoon series or even feature. It's easy to imagine John doing the voice of Bo, though I'm not sure that he would have the time. I never got the "hate" for Cena, though I'm not sure that was every really the case, either. Aside from a few instances, I think the crowd booed him because it was the thing to do rather than any real dislike. Again, in my opinion, the only missing ingredient from the career of John Cena was a breakout beyond the squared circle. Now that he's put a little elbow grease into it, the sky may be the limit...
Posted by J\/\/ at 7:00 PM