Collecting wrestling memorabilia and collecting autographs are by no means 100% connected. Some collectors would see getting items signed as ruining the item. I've known collectors on the other side of the spectrum that would have no use for an item if it weren't signed. It's all up to personal taste, but I must say that I do enjoy a good autograph. There are items that I would never think of getting signed and yet others that due to the passage of time will remain unsigned forever.

Still, there are some items that, to me and many other collectors, almost seem enhanced by the addition of a good autograph. The "window" packaging of the Jakks WWE Classic Superstars line seems made for an autograph and the decades old practice of getting a quality trading card signed will probably be forever in vogue.

Our new "Signature Moves" series will focus on various aspects of wrestling autograph collecting. It's a fun hobby that has only gotten more accessible with the rise of the wrestling fanfests and conventions of the past decade or so. Each entry in the recurring series will focus on a different aspect such as tales of obtaining autographs, stories of autographed items, and all the fun, entertainment, and enlightenment that you've come to expect here.

This entry will focus on the nicest autographs in pro wrestling. It's amazing, but "rough and tumble" pro wrestlers often have much nicer signatures than those in other professions. That's not to say they're all neat and pretty. We'll have plenty of examples for another entry regarding the messiest wrestling signatures.

Without further ado and in no particular order, we present the top five nicest signatures in pro wrestling...

Where better to begin than one of the greatest wrestlers of all-time? Steamboat has really had it all in wrestling. One of the greatest in-ring stars the sport has ever seen. Participation in not one but several matches that fans list as the greatest of all-time. A career in both the days of territorial wrestling and the national scene. A storybook comeback in the modern era to cap off a fantastic career. On top of all of this, the man is among the friendliest you'll ever meet and extremely gracious to fans. From action figures to posters to cards to magazines, "The Dragon" is one

of the lucky wrestlers that seems to have an endless stream of merchandise to sign. With several new action figures released in recent years it doesn't seem as if that stream is about to dry up anytime soon. Steamboat will often include "The Dragon" inscription with his John Hancock. 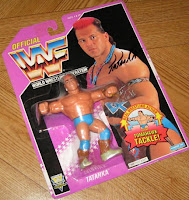 Sometimes there are cases where the signature fits the character. When Chris Chavis signs his "Tatanka" name, the formation of the letters simply look Native American in origin. Had he hit the national scene just a few years earlier, Tatanka probably would've gone a lot farther in the business than he did. An underrated star in my opinion, Chavis could have probably been the Wahoo McDaniel of his era had the time and place been different. Nevertheless, Tatanka filled the bill wherever he was needed and continues

to compete on the indy scene today. In addition to his gimmick name, he will include "Chris Chavis" when asked. All of the Hasbro WWF figures included a facsimile autograph on the front of the package. This is an easy way to see the inclusion of the "Chavis" inscription as well as proof that his autograph has not changed in twenty years.

Many of the classic female stars have a nice signature. I'll be bold enough to say that, in general, females have nicer hand writing than males. Toni's goes above and beyond that, however, and into the territory of classic movie actress hand writing. Miss Rose is one of the most accomplished and respected female grapplers of the 1960's and 1970's. Another protégé of The Fabulous Moolah, Rose garnered the attention of fans and journalists alike. Open up any of the classic wrestling magazines of the era and you'll be sure to find press on Toni Rose. Towards the latter part of the '60s and into the '70s, the articles on Rose are also often to include 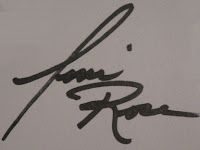 her long-time tag team partner Donna Christanello. Their association led to not only multiple tag team championship reigns but a friendship that lasted till Donna's untimely passing in 2011. Had Miss Rose stayed in the sport for just a few more years, she most likely would've seen matches in the expansion era WWF as Donna did. Even though that wasn't the case, there are still enough matches of Rose caught on film that we can see what a remarkable wrestler she was. A rare autograph, it is among the most elegant of grapplers from any generation.

Something about Harley Race just screams cool. It's a form of cool similar to John Wayne in his movies. They beat the living you-know-what out of whoever they were up against, lit a cigarette, and walked off into the sunset. The difference is that although both were fighting opponents for show, Harley could back himself up no matter the circumstance. There's a reason that when asked, most wrestlers will list Harley as one of the toughest men ever to grace the ring, and maybe God's green earth. His signature mirrors that. You can almost see the years of battles in the strokes of

his penmanship. His most often used inscription, "Best In Sports," reflects the many years that Race was indeed the best in his sport, back when the NWA World Heavyweight Championship indicated as much. Mr. Race is also always very careful when autographing items. If it's a WWF item from his 1986 through 1989 stint, Harley will add "The King" inscription. Whereas many wrestlers wouldn't even bother noticing, Race continues to prove to his fans that he is indeed a champion among men.

What is it about men who wear the crown and their regal signatures? I've always marveled at the penmanship of "The King." Even with the dullest Sharpie in hand, Jerry can squeak out a thin-tipped masterpiece on any item you place in front of him. I've often speculated that his excellence in signing was due to his talent for drawing. It's well known that Lawler's art is what actually got him into the wrestling business. Since then, whether it be part of a wrestling angle or creating a piece for charity, Lawler's royal

work has been enjoyed by wrestling fans worldwide. "The King" was the fifth professional wrestler I ever met and I've had subsequent opportunities many times since. While it's hard to run out of items for Lawler to sign, with "The King" it may be a case where the beauty of the signature outshines the items that it is pressed to. Long Live The King!

I hope that you've enjoyed the first installment of "Signature Moves." Stay tuned for many more stories and authentic autograph examples! Of course, feel free to "Like" our Facebook Fanpage where there are endless galleries of hundreds of pieces of wrestling merchandise and autographs.
Posted by J\/\/ at 7:10 PM

Interesting. I agree with Lawler and Race. I'd have to think about the rest and other options.