Ryback!  The Prime Time Players!  Miss Elizabeth!  What do the second coming of Goldberg, an entertaining young tag team, and "The First Lady of Wrestling" have in common?  They're all the newest "First Time In The Line" figures in Mattel's WWE action figure series.  They're also all fairly hard to come by thus far, as is usually the case when Mattel labels a figure as a "FTITL" entry.

As if "hot" or "popular" characters needed any help flying off of the shelves, Mattel has a way of insuring that no one misses these figures by plastering the "First Time In The Line" burst right on the packaging.  I've voiced my displeasure with this and other Mattel practices before, so there's no need to rehash that.  This time we're here to take a look at some nice new figures of some very desirable characters.

If there's a single "hot" WWE figure at retail right now, it's undeniably Ryback.  While not the first figure of the man himself, this is the first figure of the Ryback character.  Labeled as Superstar #22 of the "basic" figures on the new smaller, more compact card backs, Ryback is slated to have three figures out in a short time.  These will include an "Elite" figure as well as another basic as part of a "Battle Pack" with Jinder Mahal.  Nothing like a pre-packaged squash match! 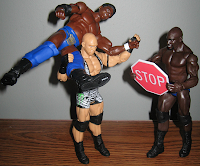 This basic Ryback is a good representation of the Goldberg-esque star.  Kids want it, collectors want it, and with a star-studded feud against John Cena just beginning, it's a good bet that the desirability won't wane.  What I do see eventually happening is exactly what happens with most "hot" figures of main-event level stars.  With three figures already available and more undoubtedly on the way, there will be plenty of figures of Ryback to go around.  Antonio Cesaro, shown here on the blog a few weeks ago, is a better bet from this very same series.  He's a much better wrestler, too, but that's another story for another time.

Continuing with "First Timer's" is one half of a popular tag team.  Titus O'Neil is the "rookie" figure and the team is none other than The Prime Time Players.  The PTP have been released in a "Battle Pack" complete with a stop sign accessory.  As with most "Battle Pack" sets, there is one set with a "FTITL" figure or two and the other sets are common characters packaged together with an accessory. 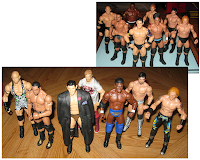 This is the second figure of Darren Young, with the first being way back in his Nexus days complete with "tall hair."  This re-release of Young as well as the Ryback figure shown above sets a fun and interesting precedence: all of the original Nexus members still with WWE have been re-released in non-Nexus attire at least once.  This is, of course, with the exception of Michael Tarver who is no longer in the company and, unless he is re-signed, will not see any more figures.  It's interesting to see how Young, Skip Sheffield, Wade Barrett, Daniel Bryan, Heath Slater, Justin Gabriel, and David Otunga have evolved since that angle a number of summers ago.  Mattel certainly seems to have given Young a tan since his Nexus days.

Last but not least, Mattel's Elite line gets a "FTITL" that is one of the most anticipated figures in quite awhile, the lovely Elizabeth.  This new figure of "The First Lady of Wrestling" was originally announced to be one of the Legends figures that were available exclusively through Mattel's collectors website store.  Mattel then made the questionable decision to put any future "Legends" figures into their Elite line as "Flashback" figures.  Some collectors were pleased with this, while others such as myself know that we will not see any truly exciting legends in the Mattel line as long as they are released in this manner.  Endless remakes of stars who have had dozens upon dozens of figures like Shawn Michaels and The Undertaker will take up spots that should be going to legends who have never had a figure such as Magnum T.A.  However, we did get a new Miss Elizabeth, and a very nice figure at that. 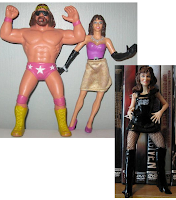 For as popular as she was, Elizabeth has only seen two previous figures.  LJN released her in the 1980's,
infamously with either a gold or purple skirt, in their WWF line and ToyBiz produced a WCW/nWo version in the 1990's in a two-pack with Randy Savage.  The LJN effort is rather iconic and beloved while the ToyBiz figure, due to being rather small and barely resembling the lady, is all but forgotten.  Thankfully the Mattel version is much more along the lines of the LJN. 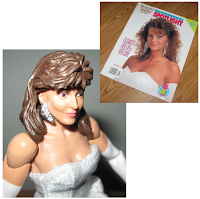 Elizabeth is clad in a glamorous white outfit that she wore in a well-remembered WWF photo shoot.  The outfit is probably the same as the one she wore for the main event of WrestleMania IV, although at that show she lacked the gloves and sported a different hairstyle.  Many fans will remember the WWF Spotlight magazine featuring Elizabeth with a stunning photo in this particular outfit right on the cover.

I'm unsure why, but I was a bit surprised that this figure uses mostly the same parts as other females in the Mattel WWE line.  Jakks did the exact same thing with their female figures, but I guess viewing the pre-production figure a few months ago simply made me think that Mattel had created a new sculpt for Elizabeth.  The face and head sculpt is all new and could easily be used for future Elizabeth releases should they choose to produce more.  With the trouble that Mattel likely had to go through in order to obtain the rights to the late beauty, it's not a big stretch of the imagination to think that there will be future releases of her.  I would not mind seeing a "WWF debut" version of Elizabeth from her early days in the company.  Unfortunately, many of her post-1990 outfits were rather boring and simply wouldn't translate well to an exciting action figure.

Of these "First Time In The Line" figures, my pick is, without a doubt, Miss Elizabeth.  This figure is the perfect compliment to any of Mattel's Randy Savage figures.  The company's desire to create an amazing figure shows, just as it does in many of their Savage efforts.  It's hard to fathom that both members of one of the hottest young acts of late-80's WWF are gone, and much too soon.  Thankfully us collectors have a great way to keep their memory, and the memories that they created for us, alive forever.
Posted by J\/\/ at 7:00 PM

I seriously laughed out loud seeing the pic with Ryback destroying the Prime Time Players and Titus basically asking him to stop. LOL...

I managed to grab Ryback recently, and I will say I really dig the figure. Much like the rest of Mattel's offerings, it really does capture the character's likeness. I've been on the fence about trying to track down Elizabeth, since it seems like that will be an eBay purchase, but since I acquired a Randy Savage figure, I guess it is only natural to get the first lady of wrestling as well!

Yeah, Ryback is definitely dead on. Go to Mattel's online shop for Liz. Only $16.99 and shipping. I found one in a store RIGHT before they put her up, but I would've gone that route had I not ran into it.