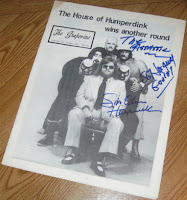 I decided a long time ago that this blog would only be filled with the good in professional wrestling. That meant nothing too controversial, no huge battles over the change in the product, and no obituaries. The truth is that death should not cloud the memory of someone's life. Everyone dies, so it isn't something unique to anyone. What is unique is the life the person led and the mark they left on others. Late last summer I felt that Luna's life needed to be discussed here. Today, the same goes for Sir Oliver Humperdink.

It's been no secret that since the beginning of the year that Mr. Humperdink has been in a rough battle. While some stars are able to hide their ailments, this simply wasn't so for Oliver. This is not only due to a consistent daily online presence interacting with his fans, but also due to the fact that this legendary manager was loved by EVERYONE.

About a decade ago I was a member of a wrestling e-mail group. I cannot remember the title nor much else about the group, but I do remember noticing that someone claiming to be Sir Oliver Humperdink frequently posted. At the time, I was only a few years removed from learning of the long territorial career of Humperdink. Most fans my age only knew Sir Oliver from his WWF and WCW stints. Looking back through magazines and old footage it became apparent that these runs really only meant national exposure. The true meat and potatoes of the "House of Humperdink" was in the '70s and '80s territory glory days.

As I began to read the posts of this person and the responses he received, I slowly began to realize that this was indeed Mr. Humperdink himself. It was completely foreign to me that such a huge name in the industry would be interacting with ordinary fans. That's because with SOH, as I came to know him, everyone was a friend.

I began to lightly correspond with Mr. Humperdink, who always signed his e-mails as "SOH," through personal e-mail. When he learned that I had copies of a few matches involving him that he really wanted to see again, I put together a vhs tape to present to him at my first wrestling convention. This convention, the 2004 NWA Tribute to Starrcade Fanfest, would also mark the first time that I was able to meet so many of my childhood heroes all in one place. Luckily for me, 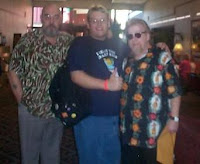 this convention included two of the all-time greats in managing--Gary Hart and Sir Oliver Humperdink.

SOH was one of the first stars that my friend Adam and I met that weekend. Through various encounters over those three days, we quickly learned that the two managers we were so excited to meet were very good friends. In fact, they seemed rather inseparable.

Later that weekend at their scheduled autograph signing, Mr. Hart and Mr. Humperdink both went out of their way to make us feel like old friends. SOH is also the only star to ever dedicate a photo to me using my initials, "JW." This is because it was how I always signed my e-mails and thus how he remembered me.

My crew and I were lucky enough to meet SOH several more times over the years. In 2009 we were honored to share our dinner table with him at the NWA Legends Hall of Heroes banquet. While SOH was his usual kind self, you could tell that his mind was elsewhere. On this night, SOH was to posthumously induct his friend, Gary Hart, into the Hall of Heroes. While SOH loved

meeting his fans and seeing old friends at these shows, you could tell that something was missing with Mr. Hart no longer present.

At the 2010 version of NWA Fanfest, SOH's career came full circle. Mr. Humperdink began his managing career in the 1970's managing the original Hollywood Blonds team of Buddy Roberts (later known for his Freebird fame) and Jerry Brown. Mr. Brown had long been missing until located earlier in the year. The team and their manager 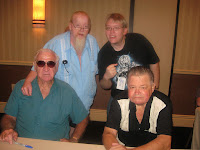 reunited at Fanfest in Charlotte for the first time in over three decades. SOH seemed to have a grand time that weekend and shared that feeling with so many of us.

As I mentioned above, SOH was an original and constant fixture in the online wrestling community. From his days using WebTV from his Key West home to the advent of social networking, SOH was always an early adopter. For those who had him as a friend on Facebook, SOH provided a daily lesson on classic music. When these updates became infrequent, many friends became concerned. It was then that SOH informed the public of his health struggles. The outpouring of concern, prayer, and love on not only his Facebook page but all over the internet has been amazing. NWA Fanfest promoter Greg Price even made sure that SOH got to have his NWA Hall of Heroes award plaque in advance. His upcoming induction this summer will be an emotional moment, but all of his friends know that "Humpy" will be right there in spirit, with old friend Gary Hart.

As a fan, you owe it to yourself to seek out Mr. Humperdink's work from Florida. Most fans would agree that this is Humpy at his finest. This is, of course, where Humpy had the nickname of "The Rooster" who was always receiving bloody 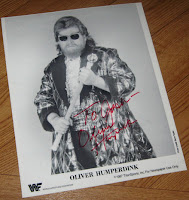 comeuppance from foes like Dusty Rhodes not to mention The House of Humperdink which featured some of the most menacing villains ever to grace the squared circle.

One thing that SOH himself pointed out to me is that the WWF "took away" his title of Sir. While there were probably flubs by announcers over his year in the company, for the most part he was simply referred to as "Oliver Humperdink." SOH informed me of this little known fact while signing his WWF promotional photo, showing the great mind and memory of this legend.

Wrestling is all about illusion. Many legends of the ring have been lost, but how many were 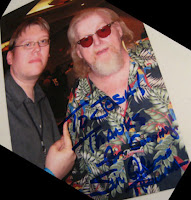 greats outside of the glitz and glamour? Mr. Humperdink was a treasure of a man in all walks of life.

All day I've thought about SOH as well as my own father, who also lost his battle at the age of 62. Both were great men who live on due to their incredible legacies left on earth. The verse on the back of my father's prayer card seems fitting here as well.

I have fought a good fight, I have finished the race, I have kept the faith.
2 Timothy iv. 7.

A true loss indeed. There was no other manager like SOH...

A wonderful farewell. Thanks for sharing this with all of us.