Wrestling's Original Diva: From Your Wall To The Hall! 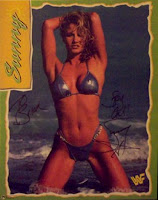 While some may call wrestling a man's world, there are more than a few ladies from the past and present that would make a person eat those words. Mildred Burke. The Fabulous Moolah. Penny Banner. Sherri Martel. All of these women had the wrestling world in their hands at different points in their career due to their actions and presence in the wrestling ring. Taking nothing away from any of these legends, one young woman created a different role for females in wrestling. Borrowing from the charismatic antics of past "lady wrestlers" and adding her own wiles into the mix, Tammy "Sunny" Sytch originated the modern day wrestling "diva."

Anyone who followed wrestling in the 1990's should not be surprised to hear that Miss Sytch is among the 2011 WWE Hall of Fame Class. While stepping into the ring as a competitor very few times in her career, Sytch created the "Diva" style without actually coining the term herself.

From her earliest days in the business as "Tammy Fytch" in Jim Cornette's Smoky Mountain Wrestling, Sytch's Hillary Clinton-esque character was in ways almost a female Cornette. Even those who only followed SMW through the magazines of the time knew that Fytch was destined to be a fixture on the scene for years to come. 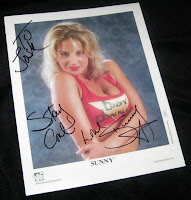 After a brief stint as host of the WWF's "Live Event News" segment, Sytch became "Sunny" to Chris Candido's "Skip." Although The Bodydonnas were a success, it was not until Sunny took on a bit of her earlier Tammy Fytch persona as a gold-digging manager that the marketing machine exploded.

In the 1996 and 1997 incarnations of the WWF Slammy Awards, Sunny was arguably the centerpiece. Between managing, commentating, and hosting, Sunny seemed to be involved in every aspect of the WWF product. The company could not have found a better female face.

Although her main stint with the WWF was just around three and a half years, Sytch would go on to grace the rings of ECW, WCW, and various other promotions throughout the world. Still involved in the business to this day, I have a feeling Sunny will be joining the group of WWE Hall of Fame members who continue to cultivate their 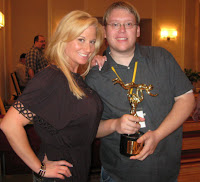 careers even after their induction. After all, what else is the "baby" member of the Hall of Fame to do?

There also is perhaps no other WWE Hall of Fame member so close to their fans. Tammy goes out of her way to keep contact with her legions of fans. With such an active calendar full of appearances, it's not hard to meet the "Original Diva" herself. 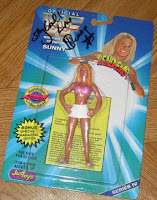 I, myself, first met Sunny at a WWF appearance in 1997. Her first figure, the JusToys Bend-Em, was also the very first autographed figure in my collection. Since then, I've grown to know Tammy as one of the kindest people in the business. I'm proud to see that someone I've followed, supported, and have grown to know and treasure as a friend is being honored for their career. 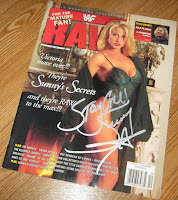 The true "Sunny's Secret" is that the best from Tammy is yet to come!

To visit "The Original Diva" herself please visit Tammy Sytch Online. For an entire gallery of Tammy Sytch memorabilia, please check our Facebook Fanpage.
Posted by J\/\/ at 1:21 AM