When one anticipates a period of time or event, often a great disappointment follows. After all, time marches on. With an event like the NWA Legends Fanfest, however, the days, weeks, months, and years that follow are just as exciting as the days a fan will spend there. That's because the event is all about one thing--making memories that will last a lifetime.

Three of my friends and I have been looking forward to the event for the better part of a year. It's a huge undertaking for both the folks involved in making the weekend happen and the fans themselves. For us, an eight-hour drive and four full days isn't easy. We're not rich, just a couple of guys looking to celebrate the sport we love and the hobby that grew out of it. Saving the money for the tickets, spending money, lodging, food, and travel expenses is no small chore, but I think we can all agree...it was 110% worth it.

Ric Flair. Harley Race. The Four Horsemen. Dusty Rhodes. These are names you think of when you think classic NWA Wrestling, and these are names that converged on Charlotte, North Carolina this past weekend for Fanfest.

Fanfest is more than just autographs and photos. Fanfest had question and answer sessions with Flair and Race, as well as legendary manager/promoter/booker/announcer Jim Cornette. Fanfest had two southern-style wrestling shows. Fanfest had the Hall of Heroes banquet and 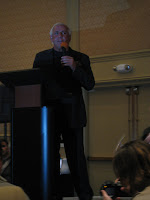 ceremony where we had the opportunity to see Lance Russell, The Fargos, Wahoo McDaniel, Nelson Royal, Gary Hart, and Blackjack Mulligan inducted into the Hall by their peers, friends, and family. Fanfest is the all-inclusive package.

While I'd love to go on and on about Fanfest, the name of this blog is Wrestling Memorabilia, so that is what I shall give you. Keeping to the topic, in this entry I shall present to you my top five favorite items I had signed and/or purchased at Fanfest.

This item is the most personal to me, most likely because I made it. For a number of the NWA Fanfest guests, there simply isn't a lot of merchandise out there. While I go out of my way to find items for most of the guests, this year I went a different route for some and made my own photos. With each guest on the main Fanfest lineup, you receive two autographs on the autograph stage. While many of the guests will sign other items for you during the weekend, it is limited to two on the stage to ensure that all of the guests get at least two from each star.

When Judy Martin was announced for the lineup, I was elated. I've taken a particular interest in the '70s and '80s women's wrestling stars in the past few years, and Miss Martin was always one

of my favorites. She was always believable in the ring, produced hard-hitting entertaining matches, and is even rumored to be one of the first to do the powerbomb on American soil. In the late '80s in the WWF, the Japanese Jumping Bomb Angels took the WWF woman's tag team ranks by storm. Their main opponents were Judy Martin and Leilani Kai--The Glamour Girls--managed by "The Mouth of the South" himself, Jimmy Hart.

Despite their great matches and popularity, neither team got much recognition as far as merchandising. A promo photo of the Girls and Jimmy does exist, but due to its rarity even I 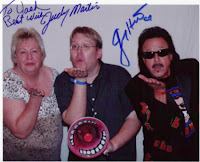 could not locate it. In lieu, I did the next best thing. I found a small copy of the photo, and that, coupled with seperate photos of Martin and Kai put together a photo I felt would look great signed. Despite promoter Greg Price's best efforts, Kai could not be found to complete the reunion. Martin, however, was my favorite of the team and did not disappoint. Both her and Hart gave me contact information to obtain copies of my work for themselves, and we "recreated" the picture in my photo with them.

Each year, a host of items commemorating the Fanfest weekend are available. From photos of the stars appearing, to posters, to t-shirts are the norm, however this year fans were treated to the return of the NWA Fanfest program. Make that...programs. A beautiful full-color program was produced for each days events, as well as a special fourth program dedicated to the Hall of Heroes event. Each individual day book featured pictures of the legends who would be signing autographs that day, as well as other classic action photos. I will treasure my full set of these as much as I would a vintage program. I made sure to have my Hall of Heroes program signed by one of the inductees, in this case, the voice of Memphis wrestling himself, Lance Russell. (Thanks, Rick!) 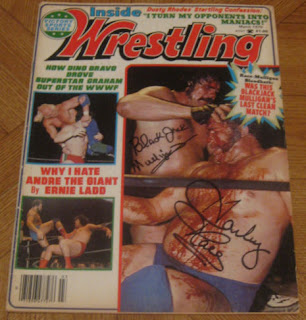 Originally, Blackjack Mulligan was scheduled to attend Fanfest and be inducted into the Hall of Heroes in person. This was not to be, however. Nonetheless, I found a way to ensure Blackjack sign a few items I had specifically for Fanfest.

This magazine has in my opinion one of the greatest "Apter Mag" covers of all-time. Mulligan and Harley Race in a bloody battle for the ages. Mr. Race signed it at the event, and it's become one of my all-time favorite signed magazines.

Please say a prayer for Mr. Mulligan, as he is not in the best of health right now. 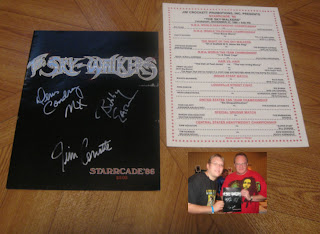 From one great collection to another, I acquired this item at the show from Mr. Jim Cornette himself. It is signed by Mr. Cornette and Midnight Express members Bobby Eaton and Dennis Condrey. Normally on an item like this I would try and get as many autographs on it as I could from the stars within, however I believe I will let this one remain as is. Nearly everyone who paid to see Starrcade '86 paid to see Cornette and MX get theirs in the infamous scaffold match. The program included the original lineup sheet (with info on the next month's show at the Atlanta Omni) and inset is a picture of Mr. Cornette and myself with the piece. 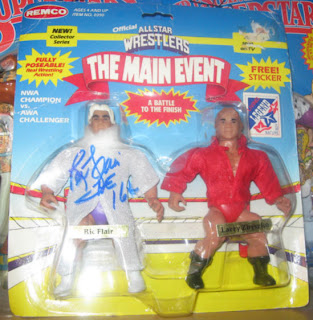 In all my years of collecting, I've never actually owned a carded AWA Remco action figure. Most of them came in two packs like these, and cost in the three digits to purchase. When I saw this one only a few minutes after entering the vendor floor, I knew I had to have it. The price, which I will only say was a bargain, motivated me as did the fact that I could have Flair sign it just a few hours later. Getting Zbyszko to sign it should be relatively easy as well, and I'll be very happy once it is a "complete" piece.

Next time--My Top Five Items Of My #1 Favorite Wrestler!