Imagine What This Bizarre Little Figure Could Do To You

Sure we all fondly remember the all-too brief flowery antics of "Adorable" Adrian Adonis. We will also never forget the name, or career, of Goldust. But going back in the history of men wearing makeup and long blonde locks into the ring, there's one guy who started it all. The original wrestling "gender bender" was Exotic Adrian Street. While he may never have had that classic WWF or WCW run that so many others did, there's no discounting his career and contributions to the business. Now, in somewhat of a surprise at this point in the game, The Exotic One has his own action figure. 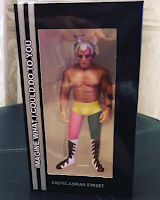 In my several times meeting Exotic Adrian and his wife/valet Miss Linda, the two have been extremely kind and gracious. They're engaging, talkative, and seem to really enjoy meeting the fans. They've also always had an online presence, especially for their wrestling gear business. Though I had heard that the couple had returned to Wales, I did not know of their latest merchandising venture. Yes, an Exotic Adrian Street action figure had been born. Sold exclusively on eBay from the Streets themselves, I had to have one. Thankfully, they will ship to the United States. 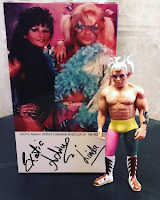 For as much as having an action figure independently produced has to cost, this figure is very reasonably priced for us collectors. The first thing that's notable is that the packaging is truly collector friendly. The box closes nicely, but there isn't any tape or seal so that you can essentially remove and replace the figure as much as you'd like. The window box is nice, and as a bonus both Adrian and Linda sign the package on the back in a spot specially left for signatures. Three photos of the couple appear on the box, as does the title of Street's self-performed theme, "Imagine What I Could Do To You."

The figure itself is very reminiscent of the Japanese wrestling figures of
fifteen years ago or the Galoob WCW line. Similar to those lines, it isn't far off in scale from the Hasbro WWF or Mattel Retro WWE figures, either. Like the former two lines, there isn't much movement here. The arms look to have been produced as separate pieces, but they do not move. I would have preferred a more flamboyant pose seeing as there isn't arm movement, but hey, that only leaves room open for a sequel.

The detail and paint are amazing for a figure that had to have been produced on a small scale. Adrian's hair, makeup, and tattoos are all on point. A colorful pallet was chosen for his gear, with a wide variety of colors going from front to back. There's only one person in the world that this figure could be and that's Exotic Adrian Street. 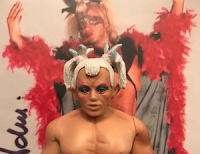 There hasn't been a lot of fanfare surrounding this figure to my knowledge. I certainly hadn't heard of it until I stumbled upon it on eBay. This is the only licensed figure of Exotic Adrian. Every legend should have a figure as so many wrestlers do now who will never attain a similar status. Instead of going with the larger companies, the Streets did it this way and hit a home run. I must say that it was the collecting shocker of the year for me to even find out that it existed. I don't know how many were produced, but I would advise getting one now if you want one. How could you pass it up when it's coming directly to you from the star himself, autographed to boot? And if this "bizarre one" does well, I would love to see second and third entries into the "series": Miss Linda and Adrian in full entrance regalia.

Wrestling action figure collections worldwide have just been turned upside down!
Posted by J\/\/ at 1:00 PM No comments:

Farewell To The King

The third of my five favorite wrestlers is gone. Joining Mr. Rhodes and Mr. Piper is Harley Race. It was not unexpected, as news of various ailments plaguing the former King of the Ring have been discussed for years. Still, Race did not let his health hinder him. The wrestling legend was en route to a convention appearance when he entered the hospital for a stay that would ultimately be his last. I, myself, just saw "The King" last fall at a northeast appearance.

Though he had the same gruff exterior that served him so well during his in-ring career, you could not find a nicer star to meet with the fans. Always accommodating to those who wanted to meet him, he had the same aura that men like Bruno Sammartino and Dusty Rhodes had. You just knew that you were in the presence of someone special who deserved your respect. And while you certainly came away with a great feeling, you knew that even as he advanced in age, Harley was no one to be messed with.

The photo accompanying this blog entry, which has been seen here before, is from the fabled appearance where Harley got into a scuffle with his former charge Big Van Vader. I was not in the room at the time, but the two were said to have had a disagreement about how Vader was treating fans. As the story goes, Harley, who was using a motorized chair to get around due to a surgery, put the "Mastodon" in his place. With all of the wrestlers who have told the cameras how feared Harley was among "the boys," is this any surprise?

Harley Race was one of the few wrestlers who truly put a bit of fear in me as a child. The only other one who springs to mind is Kamala. While the latter was due to his appearance, Race was thanks to that gravelly voice. If the phrase "he sounds like he gargled with nails" ever needed an audio example, you could play a clip of Harley. "Take the damn money!"

My first exposure to Race was in his days as "The King" in the WWF. While this was near the end of his career, I always felt it was a fantastic way for him to be part of that era. He had some fun matches and took on a persona that still fit with the serious Race of years earlier. If you've never seen it, check out the "King's Crown" match from the 1989 Royal Rumble. Famously left off of the Coliseum Video version, it's an fun little match between two of wrestling's most notoriously toughest men. The antics of Bobby "The Brain" Heenan just put the icing on the cake, as they usually did.

And not just because this is the wrestling memorabilia blog, but I'd be remiss if I didn't mention all of the great merchandising featuring Harley. There isn't a bad Harley Race figure, and he happens to be the subject of what is probably my favorite LJN WWF figure. I always felt that it was the perfect amalgamation between "Handsome" and "King" Harley Race. I've forever wondered if the figure was planned before he won the King of the Ring and that the jacket was then later adapted to represent the cape. He also had some of the coolest magazine covers, more often than not featuring blood, the NWA World Heavyweight Championship, or both. For a wrestler who's prime was before much merchandising, he certainly has more than his share which can still be collected to remember the legend.

It was an honor getting to meet Mr. Race many times and even discussing some of the above memorabilia with him. Of my five favorite wrestlers, he's the one name that some casual fans don't know. That never bothered me nor should it bother any of his fans. The others are known because they went outside of the proverbial wrestling box to gain mainstream attention. Harley didn't do that, as he simply claimed to be "the greatest WRESTLER on God's green earth." I wouldn't argue him for a second. 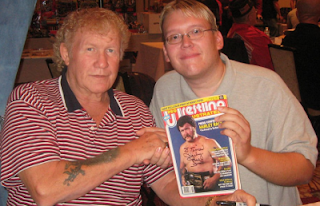