An Extreme Backdrop For Your Wrestling Fun 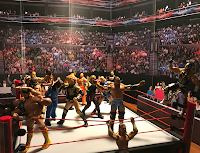 We've all been doing what it takes to get ourselves through a very challenging and unique time in our world. Many of us have escaped to our hobbies, and if you're reading this you likely share the same hobby with the rest of us. That means you may collect wrestling figures and you may very well open those plastic superstars and "let them breathe," as it were. Once you do that, you may even set up your own situations for display or photography in what we call a diorama.

A company called Extreme Sets makes cardboard backdrops for such action figure dioramas of all genres. I had long admired their work from afar both on their own site and from fan submissions on social media. I'd never heard anything bad about the company, though there truly weren't too many reviews out there, just inclusion of their product in the ever-growing hobby known as action figure photography.

With the timing of needing to find different avenues of enjoyment, I decided to treat myself with not one but two of the Extreme Sets Arena Pop-Up 3.0 dioramas. Per the site, two complete one arena. The dioramas are not cheap by any means, nor is the shipping. Like many websites in this trying time, the company did offer a percentage off in a special sale. I knew these things were big, but I didn't know just how big...

The picture that you see isn't even both sets as big as they can be, it's simply as much as could fit on my dining room table. Even not fully displayed, you can see that these things are huge.

The sets come packaged in a window box. Mine came in individual shipping sleeves in one gigantic shipping box. With one you get a "half" arena backdrop, three ringside audience boxes (two large and one small), and upper arena "VIP boxes." What you see here in the pictures is largely a combination of two.

I believe the audience element has been greatly expanded upon for Extreme Sets third shot at a wrestling arena diorama. The "audience members" are fun and don't  "repeat" very much. You could easily place a photo of yourself or whoever you'd like as an alternative, and the crowd signs are intentionally left blank. It's weird to see someone in the audience catching Andre the Giant with a camera phone, but I'm not nitpicking. If you were doing serious photography you could easily switch the audience members around so that a more "modern" fan wasn't as visible. The ringsiders are contained in boxes that resemble the modern day retaining walls, though in some of these photos you'll see guardrails added. 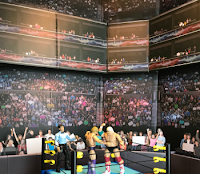 I won't say that these were easy to assemble, though I'm notoriously impatient with such things. The cardboard and printing is very high quality. It's obvious that this is why the prices are high. It's also a niche item mainly for adults. While I would've had a world of fun of these as a kid, I tended to take care of my things. I'm not sure that they're sturdy enough to last for some children. I do know that my parents wouldn't have liked how much room these take up. Unless you have devoted space for a permanent display, you need somewhere to store these.

My biggest gripe comes from the "VIP boxes" that attach near the top. While they stayed in place at first, eventually they began to come loose and also cause the lower portions to bend somewhat. This was not long after assembly. I contacted the company regarding the situation and heard nothing back. I wasn't looking for a refund or anything of the sort, but some kind of acknowledgment would've been nice. I'll reiterate: these things were not cheap to purchase. 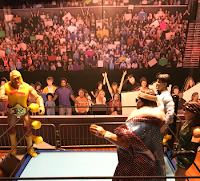 Are they a heckuva lot of fun? Yes. If you can lose yourself in wrestling figure set-ups, you'll get absolutely immersed with your rings surrounded by these. They work with any size ring as you can see with the accompanying photography and I've seen other photographs with added stages, lighting, etc. The possibilities are truly endless. Do I regret my purchase? No, though I may have only ordered one had I realized how big they were. That being said, a complete action figure arena is a sight to behold. Can you imagine these when were kids?

I won't directly link to the site as this review was paid for by one person: me. A quick Google search of the company name will find you instant links. The company has also offered wrestling backdrops on a smaller scale such as backstage areas, but those seem to be out of production. Do your homework, consider your space, and remember that, if my experience is any indication, once you make your purchase you are on your own. But as long as you have fun...
Posted by J\/\/ at 7:00 PM No comments:

LJN Wrestling Superstars. Still, in my opinion, the most recognizable wrestling figure line ever made. Everyone remembers "those big rubber wrestlers." If you were a kid of any age in the '80s, you knew someone who had a few even if you owned none yourself. You remember that Hulk was the ultimate hero, Andre had varying lengths of hair, and King Kong Bundy really hurt. Really. That was one hefty hunk of rubber. It's no wonder that so many are falling off of the card when you stumble upon one that's even partly attached.

Carded examples of these figures are less often remembered. As kids we wanted to play with these guys. While many kids, such as myself, kept the packaging to look at over and over again, in general we just ripped these superstars wide open. Today we're looking at the other end of collecting LJN. It's a look at the ones that remained on the card over three decades later. We'll also quote some of the recent auction prices for five of the more memorable characters, for better or worse. As always, prices quoted are for unsigned examples. 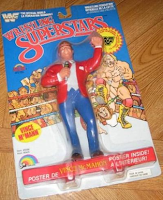 *No chance in Hell? Years before Vince McMahon became the top heel in the company, the swaggering chairman was simply a bright-blazered television announcer. The LJN figure of "Vince McMann" (so proclaimed the sticker) reflects that era perfectly with the impeccably-tailored and coiffed Mr. McMahon in a perfect pitchman's pose. Fun fact: I remember around twenty-five years ago when Figures Inc. (now known as Figures Toy Company) acquired a warehouse find of Vince LJN's and sold them for the modest price of $25 each. Most recently this figure sold at auction for an additional four-hundred dollars at $425. I wish I'd ordered more. 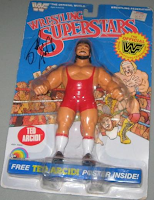 *One man who loves being an LJN figure is Ted Arcidi. Mr. Arcidi's figure is one that often became "the jobber" among kids playing with their figures seeing that his WWF run was short and unmemorable, despite competing in the famous WrestleMania 2 Battle Royal, The Big Event, and having a few O-Pee-Chee trading cards. Nonetheless, when Arcidi signed my LJN figure of himself several years ago he couldn't have been more pleased. He even asked if I would text him the picture of us holding it. I more than happily obliged. The strongman recently sold for $142 at auction, though there was significant wear to the card. 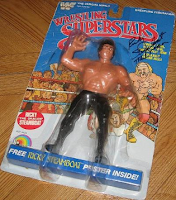 *An early favorite in the line was Ricky "The Dragon" Steamboat. Although The Steamer isn't quite as colorful as some of the other Wrestling Superstars figures, the pose is unbeatable. In another fun fact connected to the LJN line, Ricky and then-wife Bonnie actually collected the line while on the road with the WWF. They sold their collection in the early 2000's to help aid son Richie in his hobby of car racing. I'm proud to say that both the carded Miss Elizabeth and Dynamite Kid figures in my own collection were originally owned by the Steamboat family. Ricky's own figure recently sold for $400. 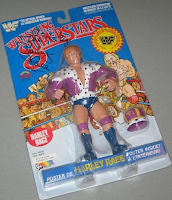 *Three of my five all-time favorite wrestlers are represented in the LJN line. Rowdy Roddy Piper is one of them. Another is our fifth and final segment in this entry. The third is right here and is also undeniable royalty. "The King" Harley Race is a beautiful looking figure and, to me, seems to have been designed with both his "King" and "pre-King" looks combined. His jacket is made to look like the cape that he wore in real-life, but also resembles the jacket that he used in the WWF before winning the King of the Ring tournament. I'm not the only one who loves this figure seeing as that it recently sold for $675.

*As with any good WWF spectacle of the 1980's we're ending with The Hulkster. There were three different Hulk Hogan figures in the Wrestling Superstars line. This newly sculpted "shirted" version was also the first to be released on a fabled "black card." While this figure is designated as a "Collector's Edition," the black coloring would later be revived for the final series in 1989, aptly named "Wrestling Superstars ''89." Though we all love the original Hogan LJN, this later version does a much better job capturing a classic dynamic pose of The Hulkster. He recently sold for an equally dynamic price of $1,251.

It's a good time to sell most wrestling figures, not just LJN's. Perhaps due to all of the gloom in the world at the moment, people want toys and are paying top dollar. It's somehow comforting to know that even with all of the advancements in action figures since the days of LJN, the Wrestling Superstars are still bringing home all the action, just as the commercial said.
Posted by J\/\/ at 7:00 PM No comments: