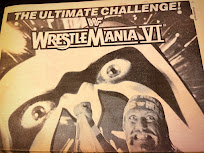 Though I’ve been very much in a WrestleMania IV frenzy over the last several weeks, with more likely coming as next year marks 35 years, it remains my second favorite WrestleMania event. My first is and will always be WrestleMania VI. You’ve got Hogan-Warrior, Dusty, Macho King (my favorite version of Randy Savage), Andre’s turn (and “final” match, although we all know better), The Twin Towers colliding, the final team-up of Monsoon and Ventura and even Mary Tyler Moore. It was a star-studded affair and the first Mania that truly looks slick. No, not “The Doctor of Style.” I’m speaking of production values. The first two Mania’s greatly resemble any other WWF event of the day. WrestleMania III is visually amazing being at the Silverdome, but you can still see the WWF growing in terms of how to properly present a spectacle. IV and V are there, but the intimate atmosphere of Atlantic City’s Boardwalk Hall doesn’t allow them to truly show off what they now know. WrestleMania VI at the cavernous Skydome in Toronto does just that. 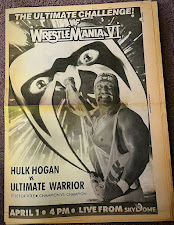 But we’re not here today to look at why it’s my favorite event. Today we’re looking at yet another effort by the WWF to get you to watch the event back in 1990. Newspapers were still a huge deal thirty-two years ago. My family religiously purchased our Sunday paper (on Saturday night, of course) and I knew many people who had the paper delivered daily. It’s no surprise that the WWF heavily advertised anywhere from USA Today to your own local paper and even those on the more "tabloidian" end. If you picked up The New York Daily News on Friday, March 30, 1990, hopefully you saved what you’re seeing here. The WWF purchased an entire pullout supplement not only hyping the WrestleMania VI matches but also giving a bit of history on the past five events.

The articles are obviously expertly written, possibly by in-house historian Howard Finkel himself? At a glance the only visible mistakes are deeming Rick Rude as “Ravish” instead of “Ravishing" and mislabeling Jake Roberts as Rude in a photo, but we’ll forgive those. A complete rundown of April 1, 1990’s matches is included with my four favorites listed as the top four. I had nothing to do with it, though you do get the feeling that Boss Man-Akeem really was supposed to be a lot more than it ended up being due to time cuts. After all, just a year prior these two were main eventing shows around the country and even NBC’s Saturday Night’s Main Event.. The Boss Man himself was also about to begin a major babyface singles run. At least here, in the NY Daily News of all places, it gets a boost being listed fourth.

Plenty of ads fill our supplement, both WWF and local in nature. Need a VCR to record the big event? Look no further than Cameo Camera & Video conveniently located in Brooklyn! Don’t want to miss a call during Hulk-Warrior? Try The Beeper Connection! And it may not be Sy Sperling and The Hair Club For Men, but Hair Replacement Systems will get you growing in three locations including Yonkers! The Hulk Hogan vitamins certainly would’ve had you growing hair…somewhere! Anyone else remember the embossed box? Regardless, “This Call’s For You!” on the WWF Hotline. No, that’s not 1-900-909-9900. That’s some other number. It’s 1-900-909-WWF6. I would totally pay whatever charges today if I could hear an exclusive Dusty and Sapphire promo. If you think I’m joking you’re on the wrong blog. 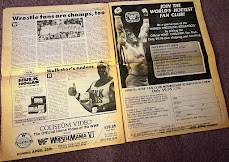 In all seriousness, this thing is a great hype job. It discusses the Fan Festival events that began in Atlantic City and will continue in Toronto. It gives some good background on the The Ultimate Challenge and there’s even a fun little article on the WWF Fan Club. Apparently there were promotions associated with the club such as “Hacksaw Jim Duggan’s 2x4,” “A Day In The Life Of The Million Dollar Man,” “The Ultimate Weekend” (where the winner is said to have been rewarded with merchandise and live event tickets) and even “What’s In Jake The Snake Roberts’ Bag?” Hmmm. Knowing what we know now I’m hoping that no kids were the winners of the latter.

Little things like this really did a lot to spread the word of WrestleMania. They don’t need to do it today due to the oft-discussed name value that the event now holds. With newspapers all but gone, something like this likely wouldn’t even reach that many people. That being said, this is a yellowing time capsule of both wrestling and culture itself. In any event, I’m fired up. I think I’ll settle in and watch The Ultimate Challenge now. The hype obviously worked on me, I think I’m up to viewing #100, at least…

Not a true entry here but a bit of a “digest” of sorts for a few recent vlog entries that I’ve made as a supplement to the blog. You’ve wanted to dive a bit deeper into the classic press kits of wrestling? Look no further!

Enjoy and thanks for watching!