Wrestling magazine titles like Pro Wrestling Illustrated, WWF Magazine, and The Wrestler may be the more celebrated publications, but you can't beat an issue or two of Mid-Atlantic Wrestling Magazine in any collection. Great covers, solid photography, and a veritable celebration of Jim Crockett Promotions in every issue. Add all of that to the fact that, though you can occasionally stumble upon a great deal, the value of the issues has rarely waned. In this edition of MarketWatch, we'll look at a couple of recent selling prices. As always, prices noted are for non-autographed versions. 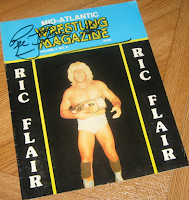 *Where better to kick it off than with The Nature Boy? In one of the later issues, Ric Flair appears on the cover holding the belt that he defended night after night, that being the NWA World Heavyweight Championship. The covers went through a multitude of changes as the years and months went by, but here on Vol. 4 No 8., Naitch appears to have been photographed after one of his many title defenses. For as big of a star as Flair was, he had fewer cover appearances on this publication than other stars of Jim Crockett Promotions. This issue recently sold at auction for $126. 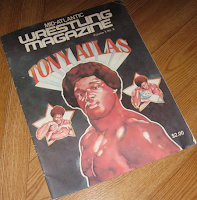 *In a look at a different format of the magazine, we get a great glimpse at "Mr. USA" Tony Atlas. Atlas had runs in nearly every promotion of the '70s, '80s, and into the '90s, but he definitely saw a great deal of popularity in Jim Crockett Promotions. Did his career ultimately not live up to expectations because of self-sabotage? It's hard to say, but Tony certainly seems to be enjoying the business, and the fans, to this day. This issue, which had an artistic cover as opposed to photographs, recently sold at the bargain price of just $20. 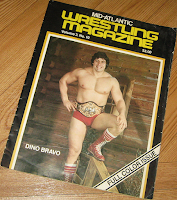 *Dino Bravo will most likely be remembered for his tragic end, but
his career spanned decades with runs in various different promotions. Before his bleached blonde days in the WWF, Bravo was both a heel and babyface around the globe. Hearing the cheers of the fans in Mid-Atlantic Championship Wrestling, Bravo captured several major titles in the promotion and feuded with the likes of Blackjack Mulligan and The Andersons around the Carolinas and beyond. His cover issue recently sold at auction for $30. 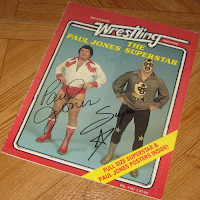 *Two men who were stalwarts at the now-legendary Mid-Atlantic Fanfests promoted by Greg Price in Charlotte, North Carolina were Paul Jones and Masked Superstar. Not only did the two men team and feud in Mid-Atlantic Championship Wrestling, but they also shared a classic magazine cover. Many fans may have grown up knowing Jones as a manager and Superstar as Demolition Ax, but large portions of their legacies lie a decade earlier before the wrestling promotions went national. This issue, with one of my all-time favorite covers, recently sold at auction for $104. Less than a year ago on this blog, we documented that this issue had sold for roughly half of that cost.

The Mid-Atlantic titles continue to hold their own. While deals are to be had on some issues, others simply won't waiver. Only truly documented here on this blog as well as on The Mid-Atlantic Gateway, the magazine continues to be a treasure to behold in the wrestling memorabilia world.
Posted by J\/\/ at 1:00 PM 3 comments: 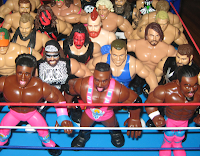 We're all like jilted lovers. Their decisions and actions betray us, upset us, and annoy us, yet we keep coming back for more. Wrestling figure collectors are the victims. The evil entity luring us? Mattel. Sure, they have a great product that we can't get enough of. But what does it take for us to get it? Lousy distribution. Much-wanted product that is deliberately made to be "chased." But here we are. And here is another review of a series that can be classified under all of the above. 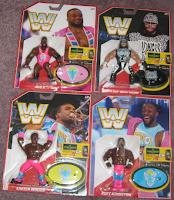 Mattel WWE Retro Series 5 should have been available everywhere. You have one of the most popular acts of the last few years debuting in a hot line and an all-time great making his "re-debut" in the style. Aside from some appearances at online retailers and, shockingly, in the bargain basement, this series really didn't show up much of anywhere. The sad part is that without these four the Retro set and collection has a glaring omission. Nevertheless, "Macho Man" Randy Savage, Big E., Kofi Kingston, and Xavier Woods have arrived. 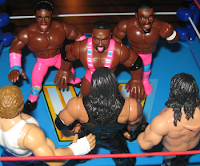 In my opinion, The New Day was a must for the Retro line. They fit the style, they're fun characters, and the men behind the characters are likely getting a huge thrill being immortalized in the type of wrestling figure that they grew up playing with. The pink and blue color combination is a ray of sunshine in a line that was getting somewhat dull in looks. Sure, many superstars of today lack vibrant colors, but one of the Hasbro WWF figure legacies is exactly that. It was a reflection of the roster at the time and this line should continue that. The current WWE Champion (as of press time) and his crew do just that. Be sure to check out Woods' very Sheik (chic?) boots and the fact that Big E's figure feels very much like Hasbro's Warlord of decades ago. 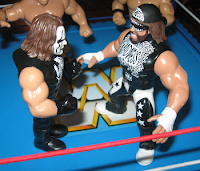 For me, Randy Savage is the sleeper here. You can't have a bad figure of The Macho Man. It just does not happen with what a larger-than-life character that he was. That being said, I wasn't too excited when this figure was first revealed. The nWo black and white colors just don't do it for me in this style. I would have preferred the Savage that we should've gotten in 1992, but didn't. A simple repaint of the "Macho King" figure with vibrant pants, similar to the figure included in the Hasbro Royal Rumble mini-ring. After having the figure in my hands, I can say that I was pleasantly surprised. It really screams "Savage" (or "Oooooh yeah," perhaps?) in the WCW/nWo era and goes well with other figures in the line such as Sting, Goldberg, and Ric Flair. It should be noted that a packaging variation has been discovered with Savage. In some releases his left arm is raised inside of the bubble. 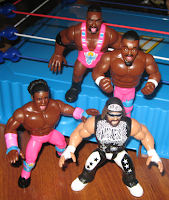 My only real gripes are the packaging, which has changed for the better in future series as documented in the last entry, and the fact that I would've swapped the "Real Wrestling Action" moves of Woods and Kingston. It's a solid lineup and good to see The New Day released together. If they all weren't so difficult to find I would say that Kingston would be the most popular due to his recent successes, but you'll pretty much have to go the online route to ensure that you pick up the set. There is already another Savage available in the line that I'm sure we'll be seeing here on the blog sooner than later, but it does not really fill the void that I mentioned above. I would not be surprised to see The New Day redone in different colors down the line also.

Thanks for still checking out the blog even on our reduced schedule. There's plenty more to come...
Posted by J\/\/ at 3:30 PM No comments: