Remembering The First Voice of WWE...

For me and many others there were three defining voices of the World Wrestling Federation: Gorilla Monsoon, Mean Gene Okerlund, and Howard Finkel. As of 2020, all three of those have been silenced. One could argue that the most prolific voice of the trio was that of "The Fink." He was our introduction to the matches as they began, a voice of instruction and information as needed, and "the official word" when the contest had ended. He was the man who coined the name "WrestleMania," and he was a gentleman to boot.

Word of Finkel being in ill health spread just at about this time last year. While no one knew specifics, the situation was painted to be rather grim. It has since come out that the man himself wanted little info on the matter to leak, preferring to keep it to those close to him. Nonetheless when word of his passing hit wrestling fans worldwide, it was still a shock that caused much grief. He was a beloved character, a voice of millions of childhoods, and quite simply too young to be gone.

Like many children first getting into the game, I'm pretty sure that I confused Finkel and Mean Gene at first. Hey, they were both balding with mustaches, microphones, and tuxedos. I even saw one accidentally sign the other's Jakks Classic Superstars figure at an appearance as they sat next to each other. I also remember wondering why they called this guy a "fink." He didn't seem weaselly. After all, he was a voice of authority in an otherwise nutty world. Also like many other children, I felt like it was his voice emanating from my throat whenever I would announce my wrestling figure events.

When I began getting closer seats at real-life events, The Fink was always willing to say hi and shake your hand as he passed by. In something I rarely see chronicled, he always seemed to enter the arena to "Welcome To The Jungle." A fitting anthem for the wild events that we were about to partake in. He also seemed to very much enjoy "hosting" the Legends of the Ring convention in New Jersey, where he would announce the goings on in the various rooms from his very own gimmick table.

Although he was left out of the early years of merchandising, The Fink bounced back when nostalgia began to rule. He received a figure in the aforementioned Classic Superstars collection and more recently entered the Mattel line with an awesome looking Build-A-Figure. He was also included in a few trading card series, most notably my favorite edition of Topps WWE Heritage from 2012.

No one was a bigger WWE fan than The Fink. This was especially evident during the run of the WWE Network series Legends House. While some of the stars made it appear that the show was keeping them from doing something better, The Fink was having the time of his life. He made it apparent in sound bytes, but they weren't necessary. The thrill was written all over his face.

There was always the chance that The Fink would be brought in to announce something here or there. That's gone now, as are his convention appearances meeting the fans that he held so dear. Like with all of these stars who've passed, we have their bodies of work to look back on and cherish. I can think of no star who would take comfort in that fact more than Howard Finkel. 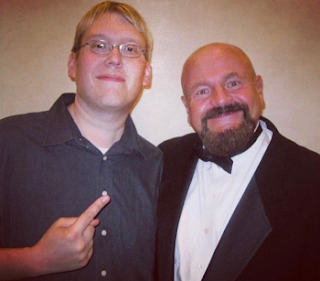