Isn't it January 2020? As hard as it is to believe, as of press time we're hours away from January 2022. I don't have to list the reasons why time is flying faster than ever. Did we even have Christmas this year? If we did I think I missed it. On the bright side we did have another great year of wrestling figures and a wider variety than in decades. Mattel, Jazwares and all of the boutique companies have brought us a bevy of wrestlers of all shapes and sizes from the past, present and future. My wallet is already cringing at what 2022 will bring. Before we examine the power of the winner, let's check out my runners up.

My criteria is not only based on the figure itself, but also distribution. If there wasn't an easy way for collectors to get their hands on a particular figure, it won't be my Figure of the Year. For example, despite being one of my favorite Mattel WWE figures of all-time, their King Harley Race of several years ago would never have won the award. Had he been in a regularly distributed set I can't see anyone else having won that year. 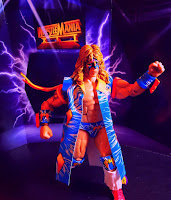 Coming close to winning two years in a row was The Ultimate Warrior. Another of my all-time favorite Mattel WWE figures was last the 2020 winner, WWE Legends Ultimate Warrior. That figure famously depicted him in his final WWE appearance just hours before his death. I still can't believe that we have the figure in our collections. Another great Warrior hit our collections this year, this time depicting his WWF return at WrestleMania XII in 1996. A Ringside Exclusive, the figure is still available thus certainly making it obtainable. The detail is absolutely amazing and the paint is second-to-none.

From Jazwares and All Elite Wrestling we have two runners up, both also seeing releases as Ringside Exclusives. The first is the TNT Champion Cody Rhodes. Handsomely packaged in a window box that doubles as a Double Or Nothing entrance stage, this was the first release of the AEW TNT Championship belt. Cody seems to be currently facing a backlash that has plagued more than one top star over the years. In a decade he will be talked about glowingly among most fans. Mark my words. Of course, it could all be an invention of the toxic Twitter twits in their basements. 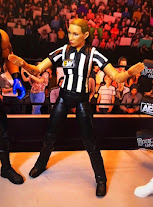 The second AEW figure on my list is referee Aubrey Edwards. A truly pioneering figure, it's the first time that a female wrestling referee has been immortalized in plastic. The figure also looks like they simply shrunk Miss Edwards down to six inches. It's that spot on. I would've preferred that she had been released on her own as opposed to having to purchase an expensive "real scale" ring in order to get her, but I know that I'm not the only one who took the plunge. I also had the chance to talk about the figure with Miss Edwards shortly before its release. She couldn't hide her happiness. 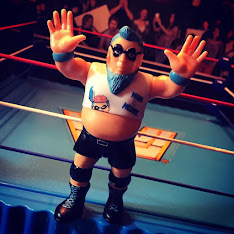 The smaller "boutique" lines are just getting started and in my opinion we'll have a lot more of these figures showing up as runners up in 2022. My inclusion for 2021 is none other than The Blue Meanie. Perhaps the most "toyetic" wrestler ever, The Meanie has been very underrepresented over the years as far as action figures. He has two more coming in 2022 including a repaint of this one. This release not only captured Meanie but also that slightly cartoonish Hasbro style. Chella Toys is doing a great job with their Wrestling Megastars line and I do predict that they will ultimately end up as the most cherished of all of the "retro" styled figures.

Our winner? The Warlord. Yes, he was part of Mattel's "Collectors Series" program and an exclusive to Wal Mart, but there was ample time to order him from their website even if you never saw him in stores. I was blown away by the detail on him from the face paint to the tights to the entrance gear. Perhaps the only thing that could've made him better to me personally was had he been in the WWE Legends line. Of the packaging from the past several years (since Mattel dropped the rectangle boxes) the Legends colors and design appeal to me the most. Will we ever get The Barbarian from Mattel? Maybe. But this half of The Powers of Pain turned out a real champ.

We're now coming up on the third year where the blog has no longer been weekly. When I began the blog in 2009, and even further back in the '90s when I published my newsletter, very few people were writing about wrestling memorabilia. I hate to declare that the blog is antiquated, but I feel that blogging as a whole is going the way of physical print media. People want podcasts. I've been told by many that I should go the podcasting route. If I were to do so, wrestling memorabilia would not be the topic. It's overexposed. That being said the blog isn't going anywhere. I still have ideas that I would like to explore with more undoubtedly ready to pop up. For those of you who continue to read the blog, I truly appreciate you.