Legends of the Ring VIII Prep

This weekend, for my crew, the Spring wrestling convention season ends with Legends of the Ring VIII on Saturday. Legends of the Ring is in Monroe, New Jersey and will feature a plethora of stars including (but not limited to) Pat Patterson, Eric Bischoff, Lex Luger, Taz, Hillbilly Jim, Zeus, Kurt Angle, and many, many, many more.

Tonight is loading up the gimmicks for the big trip tomorrow, and below is a picture of some of the items I will be bringing. Some items you may have seen before, some you may not have known even existed, but once they are autographed, many will find themselves part of entires on this very blog.

If you're going, see you at LOTR! 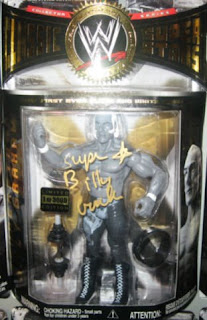 Since the line began in 2004, Jakks WWE Classic Superstars collection changed the entire landscape of wrestling collecting. Some collectors who had never entertained the notion of collecting "toys" suddenly changed their tunes. After all, who would've thought old school wrestling legends such as Bruiser Brody, Harley Race, Ron Bass, The Midnight Express, and The Rock & Roll Express, to name a few, would be made into action figures in the new millenium? 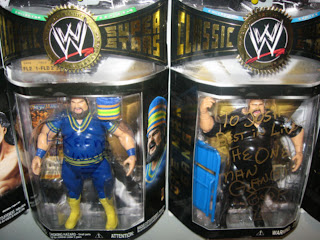 Say what you want about the company, Jakks Pacific changed that. Getting off to a rocky start in this collectors opinion, as each new series was announced, thoughts of future figures to be produced began forming in the heads of fans everywhere. "If such-and-such gets a figure, why not this guy?" Into 2005 it was clear that the lame initial lineup featuring stars who'd already had a host of figures produced, not to mention many product inaccuracies, was not going to be the standard.

Hundreds of figures and five years later, we are nearing the end of the line. It's uncertain as to whether or not Mattel (who will take over the WWE line) or Jakks (who will start producing TNA Wrestling figures) will try to tackle or some sort of "Legends of Wrestling" series. 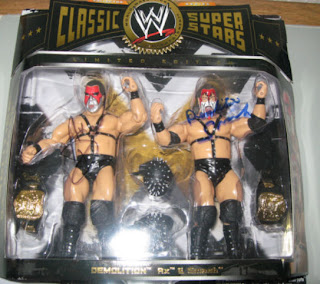 One major concept that came out of the Classic Superstars lined was getting the figures autographed. While getting items signed is obviously nothing new, getting the Classic Superstars signed has been a goal of many collectors. Personally, I have around one hundred of them signed, and I've always felt one of the appeals of getting them signed is the visual aspect. There's no question as to WHERE these things should be signed. The plastic bubble or window encasing the figure is the end-all be-all spot. 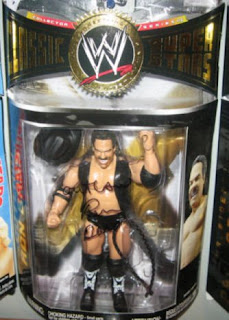 For examples, I've peppered this entry with various examples of a few signed pieces from my collection. I hope you've enjoyed this very brief history of the line as well as the photos, as I plan on doing a lot more features on the Classic Superstars in the future. And now, onto my personal favorite...as if you had to guess by now... 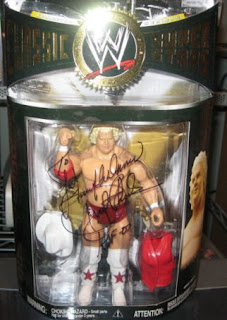 I have all of the Dusty Classic figures signed, but this, by far, is my favorite because of the signature. It's the full Dusty signature and is also personalized to me, both concepts that used to be fairly rare in a Dusty autograph.

Other Pictures Include: Superstar Billy Graham "Black & White" Exclusive signed, Akeem & One Man Gang signed, Demolition Tag Team Set signed (the singles are more visually appealing, however this is the first one that Bill "Ax" Eadie had ever signed), and "The Outlaw" Ron Bass signed (one of the ones I never thought would get a figure, and was very pleased about).
Posted by J\/\/ at 10:57 PM No comments:

Of the old school wrestling territories, Memphis ranks among my top favorites. While the wrestling may not have been "scientific" enough for some fans and the characters and feuds too "goofy" for others, to me Memphis had a perfect blend of everything I look for in wrestling.

A package full of old Memphis wrestling items came in the mail today, and I'd be lying if I said I wasn't excited about it. This stuff is great, and I even got some things I didn't bargain for. One of which, was this...

It loses a LOT in the photo (it's a bright yellowish gold with an almost psychedelic '70s effect to it), but I've never seen one of these before. How cool is that? Some of the other items fit into categories of separate entries I've been planning on doing, but I promise a lot more of these great Memphis items will show up here. So for those of you Lawler, LeDuc, Idol, and Jimmy Hart fans out there...stay tuned!