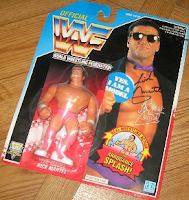 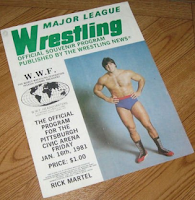 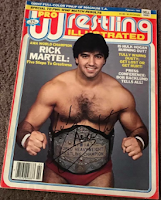 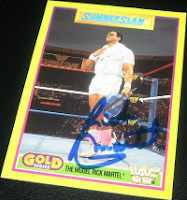 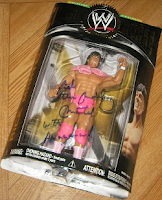 As arrogant as "The Model" was, Martel himself has always seemed to be a likable guy. Though he has appeared on the convention circuit in the past, promoters report that he has been relatively unavailable for bookings in recent years. By all accounts, Martel has had a happy and successful family and business life outside of the wrestling world. With all of the tragedy and sorrow that has surrounded many of his colleagues from the same wrestling era, this can only be taken as good news. Last seen on WWE television over twelve years ago, I think it's time that we hear that harp one more time, perhaps as part of the WWE Hall of Fame?
Posted by J\/\/ at 7:00 PM No comments: 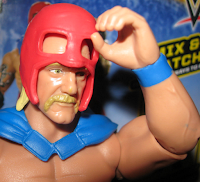 As touched upon a few entries ago, toy companies love to branch out by making various side series of action figures in which they hold the license. Get the maximum out of that investment, right? Mattel has done quite a few of these "subsets" in the decade that they've held the WWE license, yielding a variety of results. While the Basic, Elite, and Battle Pack lines have stood the test of time, others have come and gone. Some are aimed specifically to children such as Flex Force, while others like the Retro collection were most assuredly designed for the adult collector.

One series that never seemed to find its footing was the short lived Create A WWE Superstar series. The figures were undoubtedly inspired by the "Create-A-Wrestler" feature that has been included in the WWE video games for so many years. Seeing as how popular being able to invent your own grappler has been with kids and adults in the digital world, it's no surprise that a toy company would want to adapt that. Interchangeable parts and accessories to customize your wrestling world the way that you want it? Why not? 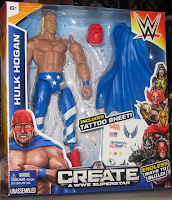 Though several waves of the collection did make it out, including some specific accessory packs, the success of the video game feature didn't seem to translate as well to action figures. While most sets contained a real WWE superstar head, accessories, and occasionally even a fictional head to identify yourself, the choice of outfit design may have been just a bit too far out. Most of the choices seemed like they were out of a really bad independent promotion. While I could imagine having loved them as a kid, the sets mostly clogged retail shelves. That is, all but one set which seemed like the only figure representation ever to be made of a certain American hero. 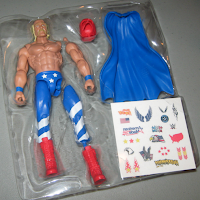 The set in question was the Create A WWE Superstar Hulk Hogan figure. Hogan was dressed as an All-American superhero complete with red, white, and blue coloring, flowing cape, and a face mask. While Hogan never donned this exact outfit in real life, the design was startlingly familiar to one that he did wear over a decade before this figure's release in 2015. Was this figure mere coincidence being included in a cartoonish figure series or was it the answer to a glaring gap in the figure archive of The Immortal one himself? 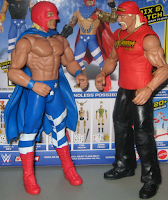 Rewind back to 2003 and you'll see a very interesting WWE scene. Hogan and Rowdy Roddy Piper were back in the mix of things on Smackdown. Whether you enjoyed it or not, it was much bigger than just a few nostalgia appearances as both were deeply involved in a top story line with Vince McMahon. Eventually the angle progressed to where Hogan had to leave WWE. Who showed up in his place? Mr. America. The tanned, muscular, mustached hero wore a mask to hide his true identity, but everyone in WWE seemed to have a hunch that the masked man wasn't Dusty Rhodes, Jimmy Valiant, or even Shane Helms. 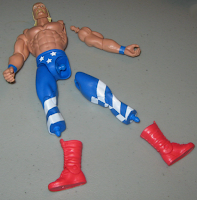 Alas, real-life disputes between Hogan and McMahon ended the formers association with the company at that point and thus fans saw the end of Mr. America. Jakks Pacific, holder of the WWE toy license at the time, was certainly planning to add the character to their figure line-up, though the toy ended up being cancelled. Not long ago pictures of the prototype surfaced on the Internet, though this was identified as being slated for the Classic Superstars line. Either way, a very cool and unique figure never saw the light of day. 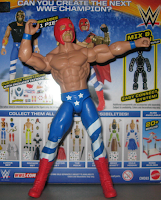 Though this Mattel version isn't exactly what the figure would have looked like had it been made at the time, it's very close. There is no doubt that this is what the company was going for. Perhaps the biggest difference is the addition of the cape, though one could easily imagine the character wearing one. Because this is the closest we will likely ever get to a true, production figure being released of the character, not to mention most of the other figures being too far out for what they were supposed to represent, it quickly became the most popular of the line. 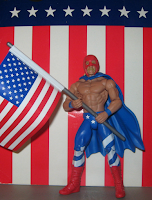 Like most Hogan figures from Mattel, secondary market prices have gone up and held. Expect to pay around $30.00 for the figure at press time. Even with Hogan back in WWE, I wouldn't expect to see a repeat of this figure. Sure, a true Mr. America could come about if Mattel starts producing figures of The Hulkster again, but I just wouldn't bank on it. The company has enough trouble now with producing legends and actually getting them into true fans hands. But that's another rant for another entry.
Posted by J\/\/ at 7:00 PM No comments: