Starting The Year Off Sadly & Silently...

As if enough living treasures from the wrestling world weren't already snatched away in 2018, we begin 2019 with yet another loss. It was just last week when I was writing about Mean Gene Okerlund who had been my favorite action figure of the year. This week, the world is mourning his death.

Mr. Okerlund's health problems over the years have been no secret. He came clean about one of his kidney transplants in the WWE Legends House series, yet in personal appearances he clearly hid any pain and suffering from which he may have been enduring. He never needed any aide to walk nor did he show major signs of age or exhaustion. He seemed to be the same Gene Okerlund that we grew up watching.

Perhaps that is why this one hits so hard. Certainly 76 isn't young, but in this day and age it isn't "old enough," either. Us children of the '80s who grew up with the World Wrestling Federation television network virtually narrated by the voice of Mean Gene figured that we would have him around. Sure, many of the wrestlers have left us, but those golden tones of the iconic announcer would be there far into the future, right? Sadly, along with the sound of Gorilla Monsoon and Bobby "The Brain" Heenan, among others, another legendary voice of the era is silenced.

For me, Gene was always the voice of authority on those broadcasts. You believed in what he said and the stars and stories that he talked about were believable. How could you doubt what he said? The grudges like Andre and Hogan, Warrior and Rude, DiBiase and Roberts were just as vicious as he claimed. If he said that the world was talking about WrestleMania, then you'd better follow his advice and get on the horn and order the show on pay-per-view right now.

And speaking of the world...no one sold the '80s WWF tagline of "What The World Is Watching!" better than Mean Gene. His voice, coupled with the dramatic camera flight over water and canyons ending with thunder and lightning. You know the intro. And while the company has had other intros since, there will never be a better one. In fact, I would love for the company to one day bring back that slogan and use his authoritative voice. If Macdonald Carey can still tell us about the sands through the hour glass decades after his death, then Mean Gene can stay with us, too.

This is another gentleman that I will greatly miss showing up at conventions and events. You always knew that you were in for a laugh when Mean Gene was there. Of the many stars that I've met, I may have the most stories involving him. From asking a well-inebriated Mean Gene about the infamous SummerSlam sign blooper to seeing him pour on the charm just as he did so often on-camera, my memories will last forever, just as will all of yours.

From all of your "good, close, personal longtime" friends in the wrestling world, thanks for the memories, Gene. You weren't putting any of us on, you were a helluva guy. 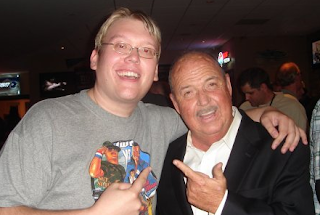