We're less than one month away from the most patriotic day on the American calendar, the Fourth of July. As a wrestling fan that likely makes you think of hot dogs, the Great American Bash, apple pie, and Hacksaw Jim Duggan. A beyond larger-than-life character the likes of which will never be duplicated, Duggan is another one of those great '80s wrestling names that is remembered even by non-fans. It doesn't hurt that when you meet him, you quickly figure out that he's a heckuva nice guy, too.

Hacksaw is back in action figure collections worldwide, now for the third time thanks to Mattel. I will make the statement that Duggan is one of the more under-produced wrestling legends as far as action figures go, especially for someone with such high name recognition. Off the top of my head, the Duggan figure count totals to eight, with LJN, Hasbro, Star Toys (Mexico), Jakks, and Mattel as the manufacturers. Today we're looking at the eighth figure in the count, but one that actually covers three eras of Duggan.

The Gamestop exclusive RetroFest line brings us the latest Duggan, joining the likes of Randy "Macho Man" Savage, Shawn Michaels, The Honky Tonk Man, and Ric Flair already in the series. The packaging is designed to resemble a vintage arcade cabinet, most notably that of the WWF WrestleFest game. It's a fun and unique change, though it does partially hide some of the figure itself. Removing the figure can be a bit of a challenge, too. 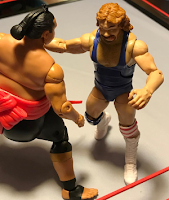 The figure itself is based on Hacksaw's 1993 attire. He began wearing the singlet after returning from injury at the hands of Yokozuna and dropped it upon his jump to WCW. His second and final figure in the Hasbro WWF line is the only other time that the attire has appeared in toy form. The head sculpt is completely different from the two previous Mattel Duggan figures, this time featuring a goofy, but accurate, "tongue out" look. The U.S. flag knee pads are also accurate and really add to the design, as does the flag design on the back of the singlet. 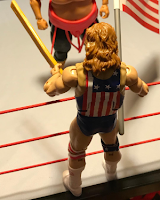 The true highlight for me are the accessories that lend themselves to two other versions of Hacksaw. Included are the ubiquitous 2x4 and flag, but the real gems are the removable t-shirt and crown. The crown is from his 1989 run as "King Duggan" and the t-shirt is a meticulous reproduction of the one offered in the merchandise catalog and at events circa 1988. With the shirt on the first Mattel Duggan release and the crown on the second, you can have a complete Duggan "fashion show." Move over Ken, Hacksaw's here. The flag and 2x4 seem to be the same as the original Mattel release of Duggan nearly a decade ago.

This is easily my favorite release in the RetroFest series thus far. It's been a wide range of disappointments (Michaels) and victories (Savage) but between the unique design of the figure and the variety of accessories, ol' Hacksaw is a winner. As always, I do advise to try and find these figures at lower than the somewhat steep initial $25 price tag. That being said, this is the one that I would probably say to go for at full price...

Down Under With Outback Jack 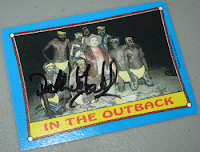 Like any genre, wrestling is full of hits and misses. Sometimes what appear to be great ideas on paper just don't translate well in person or on-screen. Such is the case with the character known as Outback Jack. Many fans don't even remember Outback very well, as it seems that if you weren't on those early pay-per-views your run can be largely forgotten. Nevertheless, other fans do remember him and it's surprising to learn that he lasted as long in the company as he did. Most notably is that he inspired quite a bit of memorabilia for a character who had a short shelf life.

The year was 1986 and the film Crocodile Dundee was banking coin and bringing laughs at the box office. It told the story of an Australian bushman finding himself in America lost in the culture of New York City. What better story for a new WWF character? The company found a man named Peter Stilsbury to portray the character and thus began the adventure of Outback Jack. As said above, it isn't a bad idea on paper. As chronicled by the vignettes shown on WWF television to introduce the character, the Australian bushmen are tough. I'm sure that many fans were eagerly awaiting Jack battling and defeating the biggest and baddest that the WWF had to offer such as King Kong Bundy and Kamala.

For whatever reason, Outback Jack didn't turn out the way that the company expected. He wasn't the greatest in the ring, but this was an era where that didn't matter as much as character and charisma. Perhaps he needed more of a rub such as the one that Hillbilly Jim received from Hulk Hogan. Maybe he needed a mouthpiece, though babyface managers were few and far between at this point. In my opinion the character may have worked had they turned him heel quickly similar to how The Honky Tonk Man was introduced, but that transition was happening at the same time.

Needless to say, Outback Jack was a failed experiment. To the surprise of many fans today, Jack lasted about a year and a half, seeing his last WWF matches in mid-1988. In a bit of trivia he even teamed with a young Steve Blackman in one of those matches, the same "Lethal Weapon" who would make a bit of a name with the company a decade later. 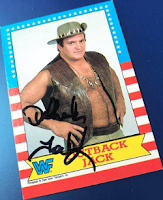 What is also surprising to some fans is the amount of merchandise that was released for the character. Outback Jack had several cards in the much remembered 1987 Topps WWF card set, even getting a "face" card that only the top superstars received. He also had a rarely seen set of promotional photos that showed Jack in and around Australia in some of the same situations shown in the introduction vignettes. There was an Outback Jack t-shirt sold through the merchandise catalog and at events, but most famous is his figure in the beloved Wrestling Superstars line by LJN. To date this remains the only figure of Jack, and it even has a removable slouch hat.

The WWF didn't give up on the idea of friendly wrestlers from "Down Under" after the Outback Jack failure. Just a few months later The Bushwhackers from New Zealand would debut and last in the company for almost a decade. Maybe their out-of-control zaniness is more of what Jack needed to win over the fans. Personally, I feel that he physically looked more like a heel and may have thrived a decade earlier as a bloodthirsty Australian roughneck. Regardless, even without any pay-per-view appearances and even few matches featured on WWE Network thus far, Outback Jack will live on thanks to the merchandising...the aspect of any wrestling career that we've been celebrating on this blog for ten years.
Posted by J\/\/ at 5:00 PM 1 comment: