A New Warrior For A New Generation 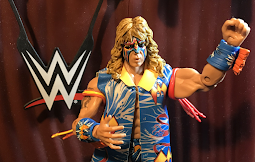 You don't have to be a fan of a particular event to want to own merchandise derived from it. I have never been a fan of WrestleMania XII. I've never enjoyed the Iron Man match nor much on the under card. At the time I remember being shocked at how few matches were on the show. The Internet was abuzz that less matches would equal better quality. Wrong. But even though his match was a squash, it was great to see The Ultimate Warrior back in action with a fresh and updated look for "The New WWF Generation."

Mattel's latest WWE exclusive through Ringside Collectibles tackles this exact look. Jakks had included it in their Classic Superstars line, famously packaging some of the figures backward in order to show the detail of the duster. We once again get the duster here along with some other cool accessories which we'll discuss in a minute. I seriously wish that Ringside received all of the Mattel exclusives, especially those involving legends which are nearest and dearest to me. A couple of clicks and I'm guaranteed to own the figure at the price originally intended. I'll stop there.

The packaging here is similar to other recent Ringside exclusives such as WALTER and Bray Wyatt. It's a box without any true way to hang it. Some collectors are against this, others love it. I, personally, enjoy the way that the boxes look and were I to buy any extras for autograph purposes (sadly not an option with The Warrior) I'd be very excited to add them to the signed collection. The window of the box is in the shape of the Warrior's famous face paint. The extra hands are visible in the window but don't detract from the presentation. You know that they're there, but they aren't enough of a focal point that they look strange.

Something else that you may notice upon looking at the figure boxed is the WrestleMania XII logo behind The Warrior. Much to my surprise this is a tri-fold cardboard backdrop of the entrance from the 1996 event. Very unexpected and cool. Mattel did not need to include this, but they did. I applaud things like that, especially when they're a nod to wrestling history. If you follow our social media you saw just how cool the figure looks "taking off from the gate." 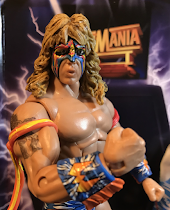 We've seen the tooling of much of this figure elsewhere before, but the head seems to be completely new. It's a great face with a very intense Warrior look. If it has been used before I don't remember it. Sometimes it's hard to pinpoint on figures that include face paint. The blonder hair was definitely accurate for the era. The blues and oranges are particularly striking as far as the gear goes and The Warrior has his arm tattoo as he did in this era. We've seen the tattoo a few times before on Mattel figures and I can think of at least one more figure where, should the look be produced, it will pop up again. 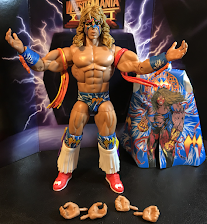 The duster is a slightly more plastic-y material than the last few we've received. I guess it's actually a very thin vinyl. The colors come across well on it which is probably why the material was chosen. The wrist gauntlets are removable should you choose to do so as you're switching out the hands. Speaking of the latter, we get three different sets: fists, gripping hands and open hands. All are appropriate for The Ultimate Warrior but I'll always get a thrill posing him as he's pressing his hands to the Heavens. Very few wrestlers were more intense and simultaneously made millions believe in a completely off-the-wall character. 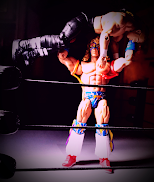 I think that you can tell that I really like this figure. The sad part is that it would have the potential to be the best version of The Ultimate Warrior produced by Mattel if they hadn't made so many other great ones. This may be a very event-specific attire, but it would fit into any collection or display. The Warrior is iconic no matter what he's decked out in. And as many as we've already received, I can think of so many more that have yet to be produced. If you know me, you know I'm thinking Dingo Warrior all day. We've sort of missed out on The Blade Runners at this point, but you never know what could happen in the future.

The initial shipment, though delayed, is arriving to collectors at press time. He's still available on back-order. While most Ringside Exclusives become desirable after a period, if you ask me this one is a slam dunk. I've said it before...get it now. And Always Believe.

I don't brag on my collection a whole lot, but there are a few wrestlers who I truly feel that I have pretty impressive "sub-collections" centered around. Of course we're talking some of my all-time favorites such as Dusty Rhodes, Rowdy Roddy Piper, Harley Race, Bruno Sammartino, Jerry "The King Lawler" and Ricky "The Dragon" Steamboat. But one that I sort of stumbled upon was the leader of The Fabulous Freebirds himself, Michael "P.S." Hayes. It's not that I wasn't a fan of Hayes, he just didn't rate up there on my personal list as some of the others that I've mentioned do. Now we all have yet another Michael Hayes item to add to the collection, his debut Mattel WWE figure.

This is another "Collector's Edition" figure meaning that it's an exclusive and doesn't officially have a "home" in a series, but it does ship with Mattel's WWE Elite 83 wave. Despite working for WWE for over twenty-five years now, for various reasons I just didn't imagine we'd ever get a new figure of him. He's had three past releases (AWA, WCW and WWE, respectively) but I just didn't see another one coming along. Such as with their releases of Magnum T.A., JJ Dillon and Paul Ellering I was once again pleasantly surprised.

The packaging is your standard design of the last few years. I've noticed a variation although I don't know if it's an official "running" change or simply luck of the draw. The Badstreet t-shirt, which we'll discuss more in a bit, seems to be positioned either lower or higher. When it's lower it obscures the Badstreet USA logo that makes the shirt one of my favorite wrestling figure accessories of all-time. If you're a carded collector this is certainly something that you'll want to keep an eye out for. 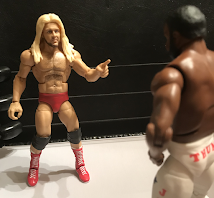 We've got a good facial likeness going. It certainly captures the "wild-eyed southern boy" look of Hayes while simultaneously being suitable for a variety of situations both in and out of the ring. Despite many in-ring wars, Hayes is the Freebird best remembered for his mouth. He was certainly a talker and the included "pointed" fingers just drive this home. I'm sure these that hands being included was no mistake. The body is a tad slim for most eras of Hayes (more on that in a sec), but the chest hair detail and the shirt hide it when it needs to be hidden.

Some have voiced their issues over this being a "mash-up" of Hayes eras. The sunglasses and picture on the front of the package do indeed reflect more of a later WCW Michael P.S. Hayes. The tights and shirt are definitely mid-to-late '80s. The slim body is actually reminiscent of when the young Freebird was just starting out in the late '70s. My response? It's probably the only Mattel Hayes that you're getting AND in my opinion is tied for first place among all of his figures. There you have it. No crying about it on this blog.

Can we get to my favorite part now? The shirt. The ironic "Badstreet USA" t-shirt is finally in action figure form. Honestly, if I saw this figure on a deep, deep discount I would probably buy extras just to yank the shirts for other figures. Even more surprising to me than the fact that we have a Mattel Hayes figure is that we finally have this shirt in this size. It boggles my mind, to be honest. There have been licensing wars over the music in the past and I'm sure that Mattel had to go through some legal hoops for this logo. Why was this even on their radar? I'm honestly done asking. I'm going to enjoy it because I absolutely love it. 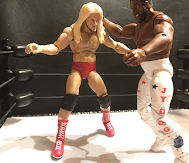 You don't need me to tell you to buy it. This figure reeks of the attitude of Michael P.S. Hayes and ranks among my favorite Mattel figures of all-time. I also consider it tied for first as far as Hayes figures go with the Galoob release which also screams "Michael Hayes" just by looking at it. Many collectors including myself had this Mattel release in late 2020 so sadly it can't be a Figure of the Year candidate, but I'll be damned if that bothers me. Grab your JYD and Von Erich Mattel figures and set the scene. Support it and maybe we'll get more Freebirds down the road.

Or down the block. You know which one.