The Year of The Liger

I remember the first time that I saw Jushin Thunder Liger. Like many of you, it was during his first WCW run circa 1992. What moves! What a cool outfit! And maybe the greatest wrestling mask of all-time? He was unlike any other wrestler from any country. Charisma without ever seeing a single facial expression nor hearing a promo. Liger was, and is, something special. Like a few other foreign stars, I always felt that he deserved a modern day action figure. The Japanese wrestling figures made by various companies nearly twenty years ago have appeared on this blog many times, but an update for Liger was long overdue. Here it is. 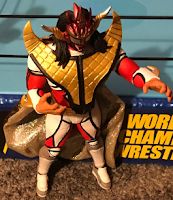 As most fans know, Jushin Liger retired this past January. After a long career covering multiple decades and wrestling in nearly every promotion in the world, Liger's retirement is well-deserved. I would've liked to have seen a surprise entry in the 2020 Royal Rumble, but it wasn't meant to be. What we did get is a WWE Hall of Fame induction and a brand new action figure. The figure is produced by Storm Collectibles, a company that makes action figures for many Japanese-born properties but came to the attention of wrestling fans just a few years ago with a Hulk Hogan line. Liger comes packaged in a window box, clad in entrance gear, and with a plethora of hands to choose from. Hands for use with various poses are a common trend in action figures these days, most notably to the readers of this blog with Mattel's WWE figures. Like with those figures, it's my opinion that hands floating around detract from the carded/boxed aesthetic of collecting. Though with a figure this great looking, who's keeping it boxed? The die-cut aspects of the box are well done and the packaging itself definitely makes it look like more of a Japanese product than something released domestically. It's also always fun to see the perpetually cool New Japan Pro Wrestling logo on a package.

As for the figure itself, I don't know if it gets any better than this. The sculpt is perfect. While some will argue that it's easier to capture the look of a mask than a face as far as a facial sculpt goes, who cares? This one is dead-on from the horns to the mesh on the eyes to the classic flow of the hair. The design of the bodysuit flows from front to back and is painted in the most recognizable Liger colors, red and white with black and gold trim. As of the time that this is being written there are two other color variants being produced, but most fans will want this version. The entrance gear is fairly easy to remove and replace (you have to bend the "hair" out of the way, but nothing extreme) and the soft goods cape has some light wiring inside for posing purposes. 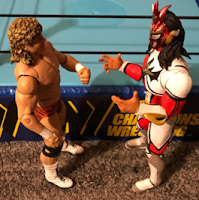 The biggest question since this release was announced is how well it matches up to figures from other producers, specifically in scale. The most obvious question is how it will look with the Mattel Flashback Brian Pillman, considering the two had some mind-blowing matches over the years. If you're planning on buying this figure, find yourself a Pillman. I'll let that and an accompanying photo tell the story. Some may be turned off by the high price point on this figure, but at least that's the retail price and it's easily available for purchase. The same cannot be said for figures from another manufacturers where collectors are paying similar prices for items that retail for less than half, but I'll leave that argument for another day.

If I had any critiques they would lie in two small areas. The upper torso is produced in a much thinner plastic than the rest of the figure. This is for easier, more realistic posing. I only bring this up as I could see wear occurring with the figure if it were put up to heavy play should it be given to a youngster. The other small negative is that the paint, aside from that on the head, isn't quite as crisp and shiny as on other figures. It isn't bad by any stretch, it just doesn't quite pop like you may expect.

Fellow Liger fans, our wishes have been granted. It fits in with virtually any other wrestling figure line of the past twenty years and also looks great on its own. We may not have gotten that aforementioned Rumble appearance, but this figure more than makes up for it. Collectors are clamoring for more wrestlers from Storm Collectibles and I must say that I'm fully on board. They aren't the cheapest, but I feel fully satisfied with what I paid in terms of both quality and the ability to easily obtain the figure. Collecting isn't a fun "hunt" for people with real lives. Simplify and show me the means of obtaining the item and my business you will have. Make it a super-high quality item and you've done one better. This ticks both boxes.
Posted by J\/\/ at 1:00 PM No comments: