The Thanksgiving Tradition--Starrcade or Survivor Series? 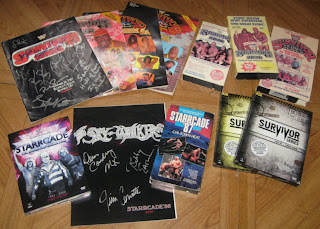 Depending on where you lived, it could be either! Of course, the first several editions of each event were presented on Thanksgiving. Due to the happenings of the wrestling business, which can be elaborated on another time, Starrcade eventually moved to December while Survivor Series moved to Thanksgiving Eve, and later to a regular Sunday night in November.

Some would argue that with either shows move, they each lost their uniqueness and charm. Regardless, Thanksgiving is a holiday that was long capped off with a great wrestling show...and the purpose of this entry is to remember that. Shown above are some great collectibles, past and present, that highlight the Thanksgiving tradition...regardless if you were an NWA fan or a WWF fan!

Yes, it's been done many times before. It's unoriginal. It kinda goes into the one aspect of wrestling collecting that has never intrigued me (props/tights/costumes) enough to get into. But I did it. A signed 2x4 from one of my favorite "guilty pleasures" of the sport over the years, Hacksaw Jim Duggan.

The "MVP" of the WWE Classic Superstars Line? 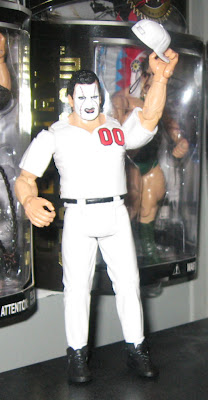 His hat may not fit and he may be sans pinstrips, but it is still absolutely shocking to me that I now own a figure of Abe "Knuckleball" Schwartz.
Posted by J\/\/ at 4:57 PM No comments: