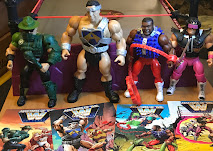 Usually novelty wrestling figure lines end without much of a whimper. This one is a tad different. In 2021 Mattel announced that their Masters of the WWE Universe line would be coming to an end. While never easy to find due to being exclusive to Wal Mart, the line was unique in that it appealed to several kinds of collectors. Of course you have the folks that have to get everything, but plenty of Masters of the Universe collectors had trouble resisting these as well. You also had those such as myself who viewed these figures, sans their fantasy gear, as "extensions" to the legendary Remco AWA line. The figures in that line were made using the body types of Remco's fantasy figures which in turn were marketed to play alongside with Masters of the Universe and looked remarkable similar.

While today we're looking at Series 7, it's actually the penultimate wave. I'm not the only one looking at Series 7 as the finale of the series for a few reasons. For starters, Series 8 hit stores before Series 7 for unknown reasons. Series 7 also includes four character who are all new to the line and, most importantly to me, all legends. Our lineup is Bret "The Hitman" Hart ("Excellence of Execution"), Junkyard Dog ("Heroic Grabber of Cakes"), Andre the Giant ("Eighth Wonder of WWEternia") and Sgt. Slaughter ("Heroic Sergeant-At-Arms").

The four come in the traditional Masters of the Universe packaging (still used to this day) garnished with just enough changes to differentiate these from the main line. Sadly, the final couple of series have included a "Collector's Sheet" as opposed to a mini-comic, possibly highlighting Mattel's lack of interest in the line. 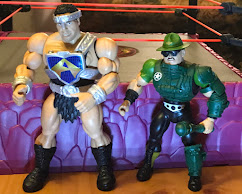 All four are solid entries in the line and, as with most of the figures in this line, somewhat resemble actual Masters of the Universe characters. Bret Hart is based off of Tri-Klops, JYD has elements of Spikor and Slaughter is very obviously a take-off of Man-At-Arms. Andre is about the only one who isn't easy to pinpoint. There were giants scheduled for the original MOTU line before it ended, but I'm not sure if Andre is supposed to resemble them. His appearance here actually reminds me of his costume in Cyndi Lauper's "Goonies" music video. You can't argue that Andre would fit into the line best. Who wouldn't want to see He-Man battle a menacing giant? And yes, this figure is large. Upon opening the figure you have to put his boots on yourself in order for the figure to be released in the same size packaging.

For me, Sgt. Slaughter was the most wanted figure for this line. Slaughter and Verne Gagne were the biggest glaring omissions in the Remco AWA line. We finally have a Sarge that fits right in to the AWA world. As with the others in this line that I've picked up, most will probably never wear their gear again. While the figures have been hit (Hulk Hogan, Ultimate Warrior) or miss (Kane, Jake Roberts) as to whether or not you can utilize them as basic wrestling figures, this series pretty much hits the mark aside from Bret missing the singlet top. Slaughter concerned me the most and, again, he came out great. Even the hat and glasses are removable. 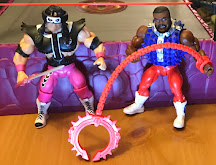 So far this series is a hot one. I lucked out and was able to grab a set when an online retailer briefly had them available, but most are probably going to be struggling with Wal Mart on these ones. The line replacing this one is another Wal Mart exclusive called "WWE Superstars" and is a direct homage to the Remco AWA line complete with cloth clothing and accessories. Thus far The Honky Tonk Man is the only one who truly strikes my fancy, but I'm sure we're in for some goodies. That being said, there were more wrestlers that it would have been fun to have had in "WWEternia." I pictured Bam Bam Bigelow as some sort of master of fire and Kerry Von Erich, literally a living embodiment of He-Man in his heyday, would've been amazing in the line.

Regardless, for a couple of years, you and WWE..."HAD THE POWERRRRRR!"