In the past I've compiled several entries on wrestlers who have never had action figures. What you are about to read is not about a figureless wrestler, but it does involve a growing trend which may very well ensure that nearly every superstar who deserves an action figure ultimately gets one. Independently produced toys and action figures are becoming more and more prominent. Some are mere takeoffs on existing lines. Others are attempts at continuations on popular toy lines of the past. Taking quality and rights issues into consideration, there's often a fine line between collectible or high-quality custom when it comes to these items. Ultimately it's up to the collector as to whether or not these items are "acceptable" and something that they want to own. I, myself, have come across two such items that I have added to my collection and thus have appeared on this blog. The first was back in 2019 when Exotic Adrian Street had a figure of himself created and produced. This time it's the beginning of a new line. 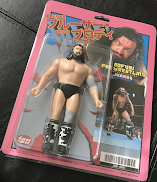 For the name that he was and as popular as he remains today over thirty years after his death, Bruiser Brody is relatively underrepresented as far as action figures go. Aside from a stateside inclusion in Jakks WWE Classic Superstars line coupled with a few brief appearances in Japanese wrestling figure lines, collectors were somewhat limited as to how they could add Brody to their toy shelves. Thanks to a creator out of Australia known as Junk Shop Dog, we now have the man known outside of wrestling as Frank Goodish in a style that he probably should've been part of in the first place.

In 1981 a Japanese company called Popy produced what is considered to be the first line of wrestling action figures. The figures were soft vinyl "sofubi" figures and the lineup largely consisted of gaijin (foreign to Japan) wrestlers who had made their name in Japan. Highly sought after today, Hulk Hogan, Andre the Giant, Harley Race and The Funk Brothers are just a few of the names who made up that initial wave. As big as he was in the country, Bruiser Brody was not part of that group. Until now. 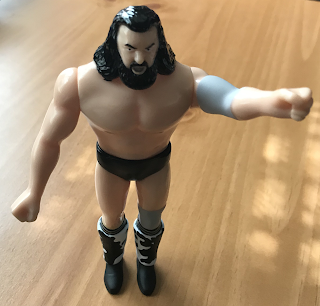 Junk Shop Dog has revived the line, not only replicating the style of the figures themselves but the look of the packaging as well. The figure and other merchandise (available at junkshopdog.com) is officially approved by the Goodish family. This should be important to any collector grappling with the aforementioned dilemma of whether items like this are "official" or not. This one absolutely is.

This isn't a figure that you're going to be doing spectacular wrestling poses with, as none of the Popy figures are. That makes it no less visually stunning. Brody fits right in with all of the originals, right down to the scarring on his forehead. Because of the vinyl used, it's also a very pleasant figure to hold in your hand. The materials are obviously very sturdy and the back has production markings just as any mass produced figure would. 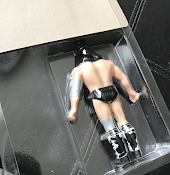 Another nice feature is that the packaging is the absolute definition of what would be deemed "collector friendly." Want to remove the figure? Just slide the backer card out and remove the plastic tray. Feeling like hanging it on your wall? He's perfectly replaceable with nothing whatsoever to destroy. No matter carded or loose, you can have the best of both worlds on this one. Speaking of the cardback, it is printed with high-quality photos of Brody and looks nearly identical to the Popy packaging of yore. 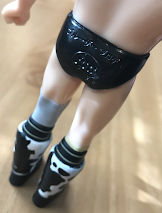 I first learned of Junk Shop Dog and this figure on Instagram, though they seem to have a presence on most social media platforms. I can personally attest that they are very easy to work with as far as obtaining one for yourself, payment, shipping, etc. In addition Tom Billington's daughter has already announced that Dynamite Kid will be the second figure in this revived line. You can count me in for one of those as well. And for those of you who are interested in the monetary side of collecting in an interest for the future, many of these independently produced figures have already risen in secondary market value. Considering the names and the retro styling, I can only predict similar results here.
Huss!
Posted by J\/\/ at 3:00 PM No comments:

The first big wrestling legend passing of 2021 was the man known as Butch Reed. About a week before his passing, news broke that the wrestler-turned-rodeo star had suffered two massive heart attacks that left him in rough shape. Always known as a tough guy, fans hoped that he would pull through this most deadly opponent.

Everyone has a different version of Butch Reed that they prefer. In territories such as Mid-South and Florida, "Hacksaw" Butch Reed starred variously as a heel or a babyface. His feuds with Junkyard Dog and that "other" Hacksaw are legendary and very well-remembered. He came to the WWF as "The Natural," an obvious play on the looks of Hulk Hogan. It was indeed a great look but for various rumored reasons the run didn't last as long or go as far as it probably had the potential to. Appearances at WrestleMania III, in the main event at the inaugural Survivor Series and in the fabled WrestleMania IV Championship Tournament are definite highlights.

Still, others remember Butch Reed as one of the Doom boys. The "Team of Doom," as Gary Michael Cappetta famously announced them, were a top team in the early days of WCW once the promotion was slowly shedding its NWA connection. Along with Ron Simmons and managed by either Woman or Teddy Long, the team gelled perfectly and could produce top quality matches with virtually any opponents.

Following the on-screen break-up of the team, Reed floated in and out of the business but sadly made no more real impact on it. Being a fan of Reed no matter where or when he showed up, I still fondly remember his surprise return on the star-studded Clash of the Champions XX program. For those who feel that WCW couldn't make an event feel special, do yourself a favor and pull that one up on WWE Network. It's simply a fun show.

It was the run as one half of Doom that produced Reed's only action figure appearance, however there was a Bend-Em produced on the same look. Various trading cards and program cover appearances abound, but I do feel that Reed has always been underrepresented in the merchandising arena. It actually shocked me when putting in the "labels" for this entry that this is the first time that Reed has ever appeared on this blog in its nearly twelve year existence.

I often speak of superstars who I feel were a true "wrestler's wrestler." Butch Reed qualifies in every aspect. Godspeed, Hacksaw. 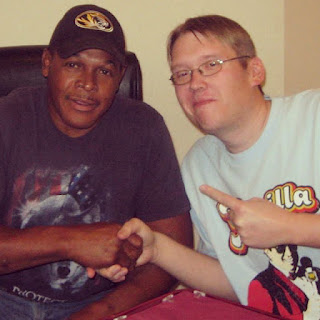