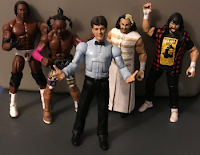 Just when you think there's a character who will never see another figure release the companies go and pull a surprise. When Jakks released "Dangerous" Danny Davis in the WWE Classic Superstars line over a decade ago, collectors considered themselves lucky. Even though Davis was more than just a referee, the "non-wrestler" characters have always been few and far between when it comes to figure releases. Making it more surprising is that in Mattel's decade with the WWE license there have been virtually no referee figures aside from wrestlers clad in "guest referee" attire. Thanks to the "Build-A-Figure" concept, things have finally changed.

Re-dubbed "Build-A-Referee" and released as a WrestleMania subset, the latest "Build-A-Figure" series returns with Danny Davis as the fifth figure in a set of four Elite releases. The main release figures are four popular wrestlers clad in memorable attire as seen over the years at WrestleMania. In this latest BAF set we've got Mick Foley, Kofi Kingston, "Woken" Matt Hardy, and Booker T. The packaging is based upon the pirate theme of WrestleMania XXXVI to be held in Tampa, Florida.

I dislike when opening figures is a chore. With the tough plastic used for the trays holding the figures into place, I don't see why bands, ties, and other annoying pieces are necessary. It's a small annoyance, but this set just seems to have extra bondage holding the figures in. The additional hands, though a nice touch on modern Mattel Elite releases, are often difficult to remove as well. I guess the alternatives are possible messes for carded collectors, with accessories coming loose in the box.

All four wrestlers are popular choices, and at least three are in easily recognizable attires. While I wouldn't include Matt Hardy's design as WrestleMania-specific as the others, I do believe that this is the first figure release of "Woken" Matt with the full entrance gear. Kofi and Booker reflect their respective runs at world championships, while Foley mirrors his hardcore battle with Edge that culminated in a memorable incident involving a flaming table. 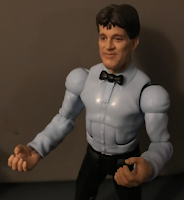 My favorite figure here, as is usually the case with the BAF sets, is the figure that we're building itself. Mattel's version of Davis is a huge upgrade over the aforementioned Jakks version. While the latter was better for carded/autograph collectors (something that Build-A-Figures are never good for), the facial sculpt on that one was a mere passing resemblance. This version is perfect and captures the cocky attitude of the referee as he was beginning to show that his true colors weren't exactly black and white.

What's most interesting about this BAF set is that it's the first time in the history of Mattel utilizing the concept that you truly do not have to buy all four figures to complete the fifth. The only "pieces" of Davis that are included with Kofi are an extra set of open hands. Sure, Davis can "count" with these, but another set of hands are included with the arms (packaged with Booker) and the open hands have been released with other figures. An interesting decision and one that makes you question Mattel's planning. With all of their bad decisions as far as distribution over the past several years, maybe this shouldn't have come as a surprise. 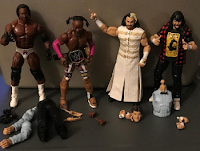 While there isn't a truly bad figure in the bunch (though Foley's facial likeness leaves a bit to be desired), none of these would've been necessary purchases for me had it not been for Davis. Each of them have some appeal, but nothing crucial to be picked up aside from being on sale or clearance. As with most Mattel WWE product, the jury is still out if these figures will remain at retail price or if one or all will suddenly rise in demand. When a BAF is at stake, you generally don't want to take chances...or be counted out.
Posted by J\/\/ at 7:00 PM No comments: