Double J Rides Into The Hall Of Fame 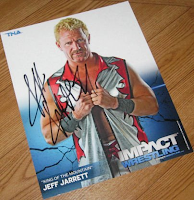 Jeff Jarrett in the WWE Hall of Fame? Talk about a Sammartino-sized surprise entry! Of course it seems as if everyone is eventually welcomed back into the WWE fold, even if posthumously. Still, ol' Double J has been persona non grata in the company for nearly two decades. Now he's back with a bang, or maybe a guitar shot, right into the Hall of Fame. For a long career, a few entertaining personas, and endless work behind the scenes in the pro wrestling industry, Jarrett is a more than Hall of Fame worthy name. 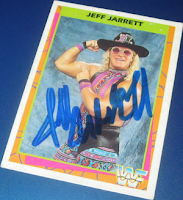 There is already a plethora of Jeff Jarrett merchandise out there, but like in our discussion about Goldust a few weeks ago, a new Double J item could fix a long-standing omission. Jarrett was at the height of his entertaining WWF introductory run during the beloved figure reign of Hasbro. His name is long been said to have been coming in another series that never arrived. Before Jarrett enters any other Mattel series, I would love to see Double J, complete with '90s attire, in the WWE Retro line.

My current favorite Jarrett figure already carries that look and was the rookie release for the Nashville superstar. The figure is still a major highlight of the Jakks "Bone Crunching Action" line and is the only figure to reflect the "electric cowboy" look of Double J. The cowboy hat and glasses are here, but a Mattel Flashback figure could include the complete "lighted" entrance gear that illuminated WWF entry ways in the 1990's. 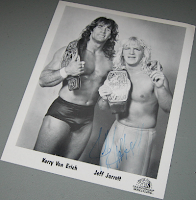 Of course Jeff Jarrett merchandise spans further than his WWF run. Items from WCCW, WCW, and, Jarrett's baby, TNA all exist en masse. It was during these TNA days that Jarrett became a fantastic signer as he always took part in the autograph sessions and fanfests attached to the events in which he was a part of. And like so many babyfaces out of World Class Championship Wrestling, it's not unusual to come across vintage Jarrett signatures from the glory days in Texas.

Through TNA and later Global Force Wrestling, the signature laser-etched Jeff Jarrett guitars became a popular item. Though somewhat of a chore to store, no Jarrett collection is complete without one. I did cringe at shows seeing them filled up with signatures other than Jarrett's alone, but that was a selling point that TNA pushed. It's like having someone other than Stone Cold Steve Austin sign a Smoking Skull Belt replica. Someone like, say, Kelly Kelly. Yes, I've seen it happen...

WCW is also a prime source for Jeff Jarrett memorabilia, especially during the "Slapnutz" era. Pennants of many stars crept up during this time, but the ones featuring more of the nWo related talent seem to be the most plentiful. Double J's is one that does not show up very often. Jarrett was very surprised to see one himself when he signed mine. Even a bean bag doll, complete with guitar, was produced at this time.

Like so many thousands across this great land of ours, I've been caught in the clutches of sickness. Though I'm largely over it, the fatigue and general feeling of uselessness almost caught me blog-less this week for the first time since I went weekly years ago. Never one to disappoint, I had to think of a way to equate wrestling memorabilia and illness. Bingo!

Many years ago, when I was in the third grade to be exact, there was to be a birthday party at my house with a few friends and their parents. I was thrilled with the idea of multiple families converging at my house, as it just wasn't something that happened regularly. I was anticipating the evening greatly. 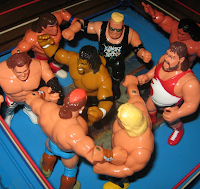 That afternoon at school, as much as I tried to fight it, the feeling hit me like a ton of bricks. I was sick. Although I managed to make it to the restroom or nurse's office before creating a disgusting mess, let's just say that I made it quite known. In fact, I did something that I never did at school. Between the pain of the bug, as well as disappointment in the inevitable, I cried. In some sort of private personal policy, I simply did not cry at school. I knew kids who did, but it just wasn't something in which I partook. Even my teacher at the time, a miserable boy-hating battle ax, was compassionate at this most pathetic hour of my life.

As I was picked up to go home, I knew that the parents would be called and the party would be cancelled. As my feeling improved in the evening, I was at least given my presents from my parents. What did I receive? Several Hasbro and Galoob wrestlers as well as a new ring! Although I already had the Hasbro WWF ring, this was a knock-off sold at Hills Department Store. It was vinyl, had a soundbox attachment, and was something that I'd had my eye on for a long time. 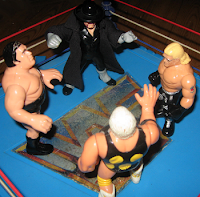 In the second disappointment of this birthday, the ring turned out to be a dud. Soon after assembly, the ring ropes caused the turn posts to cave in, thus rendering it useless. Never ones to waste money, my parents gave me a choice. I could either exchange it and try another, or return it and use the money to buy more figures. Of course I was going to expand my roster! I can confirm with certainty that Akeem, Demolition Ax, Butch Reed, and Rick Steiner were among the new talents to join my "company" because of this debacle. 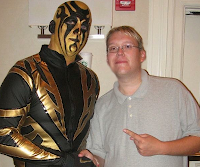 Back in 1995, who would've thought that in 2018 we would still be talking about the character Goldust in the present tense? Indeed we are doing just that. While no longer as edgy as the character was twenty-three years ago, everything else has just gotten better. In fact, the 48-year-old superstar shows no signs of slowing down. Perhaps the movie-quoting wrestler should set his sights on "The Curious Case of Benjamin Button," as "The Bizarre One" truly seems to be aging in reverse. 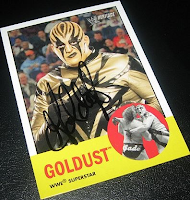 Dustin Rhodes certainly could have had a respectable career had he remained "The Natural." He was always more than capable in the ring, but needed to leave the larger-than-life shadow of his father, "The American Dream" Dusty Rhodes. By shocking and changing the wrestling world, Dustin did indeed "shatter dreams" and created one of the most memorable personas that the industry has ever seen. 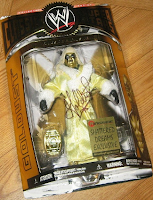 Though Goldust burst onto the scene in a "dark time" for wrestling action figures due to the Hasbro WWF line ending roughly a year before his debut, the character has had no shortage of representation in plastic. He was in the very first assortment of six figures produced by Jakks and made it all the way to the Classic Superstars line. It was there that he saw arguably his finest figure, complete with shiny gold packaging. Many of his figures have included his signature blonde wig while others featured several different versions of the classic Goldust robe. In recent years, Mattel has included entries into their line spanning all eras of the character. Even a Create-A-Wrestler figure featured Goldust in an Egyptian Pharaoh costume that fit right in with the style and antics of the golden star. 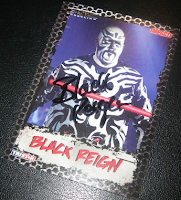 Notably missing from most Goldust merchandising are any items from his brief stint as "The Artist Formerly Known As Goldust" during the "Attitude Era." This version of the character, paired with the late, great Luna Vachon, had maybe just a few too many adult themes to translate into products aimed at the mass market. When Rhodes went to TNA, he brought to life a character similar to Goldust known as "Black Reign." Basically, the gold turned to silver in a rather forgettable takeoff of "The Bizarre One." This incarnation did spawn a trading card. 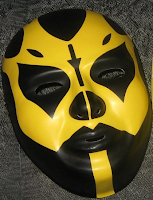 It goes without saying that Goldust's unique appearance made many magazine covers, photos, and, of course, face masks. The varying face paint designs over the "Decades of Dust" have lent their appearance to a variety of masks, an item which returned in recent years and have once again become available through WWE. And one cannot forget Rhodes' autobiography which notably documented his recovery from years of addiction. 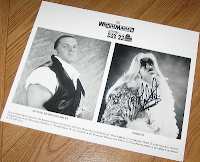 The future is bright for "Goldie." He continues to be a valuable member of the WWE roster, most recently teaming with Mandy Rose in "Mixed Match Challenge." When his in-ring career is finally, and regrettably, over, he will likely have another WWE company role waiting for him and, without a doubt, a spot in the WWF Hall of Fame. As far as merchandising goes, a glaring omission can finally be righted. A figure in Mattel's WWE Retro line would fill the void left by just missing the Hasbro collection nearly a quarter of a century ago.

Collectors have long enjoyed figures in a variety of scales. Recently, it seems that smaller is better. Fans enjoy when they can take their favorite character to work and place it on their desk, perhaps set it in their car, or even just throw it in a bag to have wherever they go. The world-famous Funko Pop! vinyl figures, which have taken on just about every license that you can possibly think of, definitely helped in this latest trend. While there are WWE figures under the Pop! banner, with figures of the Young Bucks soon to join, it's even smaller Funko figures that we'll be looking at here, along with a rogue band of grapplers who fit right alongside.

The figures are one solid hunk of plastic permanently posed in a signature look. Some of the likenesses are perfect (Piper, Goldust) while others could use work (The Undertaker) and a few have curious choices for design such as Nash (wearing tights) or Hogan and Savage (a mishmash of eras). Regardless, these little guys are fun to collect. A few that were featured in promotional materials, such as Mick Foley, thus far remain unreleased.

Meanwhile, the folks at Pro Wrestling Tees/Pro Wrestling Crate have come up with an "independent" alternative. Utilizing talent that is not signed to WWE, the "Micro Brawlers" line was born. Packaged in baggies with cardboard headers, talent from around the world and a couple of different eras have been included in this ever-expanding line. Already featured are CM Punk, Big Van Vader, Kenny Omega, Colt Cabana, The Young Bucks, Taz, Cody Rhodes, Joey Ryan, Marty Scurll, and Penta el Zero M. 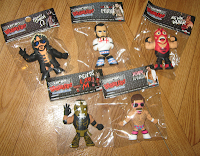 You can tell at first glance that the Micro Brawlers borrow heavily in their cartoonish design from the Mystery Minis. Just look at the heads of the figures right down to their wrestling boots. The figures are very close in scale, however the Brawlers are somewhat thinner. The Mystery Minis are hard plastic, while the Micro Brawlers are an almost bendable rubbery material. While the Brawlers may not be as heavy as the Minis, you still just have to love them. The fact that a small company can produce cool little figures such as these is very impressive. In the same vein, it's interesting that some WWE licensed photos are being used on a few of the packaging headers. 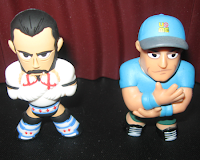 Is it a battle? No way. It's two separate figure utilizing a similar design. The Brawlers are being marketed to their own audience online, while the Minis are targeting the vast WWE Universe. The Brawlers continue to add new stars, while nothing new has been heard on the Mini horizon in quite some time. Ultimately who wins? Those of us who realize that all of these brilliant diminutive wrestling figures compliment each other and combine to form a miniature world of wrestling crossing several eras.