For months now I’d put off reviewing Topps WWE Heritage 2021. Since they ended up being delayed until December, they’re essentially a 2022 product. I received the hobby box that I’d pre-ordered many months prior, opened it and even took pictures for an eventual blog entry. A few different factors made it clear to me that I just wasn’t ever going to actually complete the review. As always I loved the style of the Heritage cards. As they do for many others they remind me of my childhood. I also liked the style based on the 1990 Topps Baseball set, direct from the era in which I collected sports cards. I even pulled two autograph cards which is not a guarantee. Still, I was less than enthralled with the set. 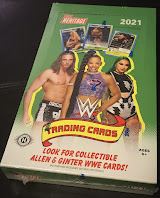 I’m sure it wasn’t the delay. We’ve been facing delays on products across the board in many instances over the past several years. Was it perhaps that this is likely the last WWE Heritage set since Topps lost the license to Panini? Possibly. But I think it actually boils down to the fact that the set itself was just plain uninspiring to me. I’ve done many reviews on items that I don’t care for, but this set is just sort of…there. Nothing about it sticks out and it reminds me more of a general Topps WWE release than a Heritage set which is expected to stand out. Instead of wasting my time and yours with a review that really wouldn’t accomplish anything, instead I’ve decided to look back on some of my favorite WWE Heritage sets of the past. A “goodbye” of sorts to the popular and long-running card type. 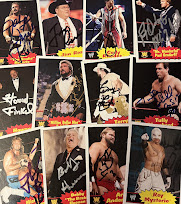 My favorite WWE Heritage set has always (or at least for the past decade) been the one from 2012. Being styled after the 1985 and 1986 Topps and O-Pee-Chee WWF product always made it stand out. It was also the grand return of WWE Heritage cards after a hiatus of several years. While it’s a shame that major names such as Hulk Hogan, The Ultimate Warrior and Randy Savage were unavailable to the license at the time, it’s more than made up for with the inclusion of Dusty Rhodes, Mean Gene Okerlund, Jimmy Snuka and Bobby “The Brain” Heenan. Even The Machines make an appearance in a subset. And who bigger to adorn the boxes and packs than Andre the Giant? 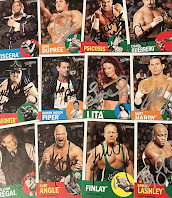 The 2006 WWE Heritage set, officially known as “Heritage II,” is another well done set. The 1963 Topps Baseball design just works right for wrestling. While many big names are included, there were other stars in the set who had very few cards elsewhere. While at the time I can recall wrestling fan friends and I asking the question, “How will there ever be nostalgia for this era?”, there clearly is now. Many of these stars are now experiencing new popularity thanks to nostalgia for this era which is fast approaching two decades ago. It goes to show that sometimes it is about what you grew up on and a returning fondness for that content in adulthood. When something isn’t part of our own childhood we often forget that. 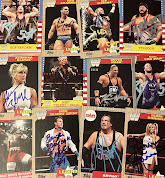 The 2017 WWE Heritage set was a double whammy from 1987. Not only were the base cards based on the iconic Topps 1987 Baseball set, but a SummerSlam subset heavily borrowed from the 1987 Topps WWF/WrestleMania III set. I’d always wanted the latter to feature in its own WWE Heritage set, going so far as to create several cards myself for a “fantasy” blog entry of sorts about a year prior to release. Still, it was nice to see the design used, even in a subset. Perhaps the design is just too “patriotic American” for todays audiences. That’s a rant in itself. Nonetheless, both WWE Legends and then-current roster members were well-represented.

As you can tell from the accompanying pictures, the Heritage sets have always held one big advantage for me: ease of getting them signed. Modern glossy cards haven’t always been the easiest to deal with when it comes to obtaining an autograph. Many collectors want nothing but the “authentic autographs” as pulled from a pack. That’s fine, too, but there isn’t anything quite like getting the autograph yourself. Plus, like seemingly everything these days, the modern cards just feel “cheaper.” Thin and almost plastic-like, nothing beats classic cardboard. Nothing.

Although there’s plenty more to talk about with cards from the past, I do fear that this could possibly be the last “new” card set to be featured on this blog. That’s why, even though the main topic was my favorite Heritage sets from the past, I have included a few photos from that “lost” blog entry detailing the 2021 set. They’re part of my collection now, it isn’t a bad design and I could’ve done way worse on the autograph pulls. With the change in manufacturers, I can’t imagine Panini putting out anything close, especially with the inability to produce classic designs. I remember the days when Panini made my sticker books and kept to that…

…get off my lawn.