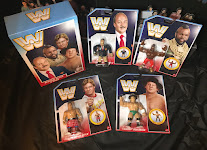 As we longtime wrestling collectors continue to be amazed by the unbelievable items making their ways into our hands, Mattel returns to that very game. Perhaps stimulated by the buzz and popularity of the "boutique" figure makers releasing various lines of Hasbro-esque retro figures, Mattel announced last summer that they were indeed returning to that very scene. It's been several years since their last wave of WWE Retro figures, some of which were met with a less than favorable response. Seemingly cleaning up their act to combat the criticism, the line is back and better than ever.

Instead of trying to get the line back into stores, Mattel decided to re-launch the figures through their Mattel Collectors site. Now released in sets of four titled an "Official Retro 4-Pack," the first of these sets was available for roughly five hours on January 28. While that may not seem like a terribly long time, compared to many modern releases it was more than enough time for anyone who wanted one to get a set. With the names of Mean Gene Okerlund, Rowdy Roddy Piper, Cowboy Bob Orton and Mr. T, who WOULDN'T want a set of these? 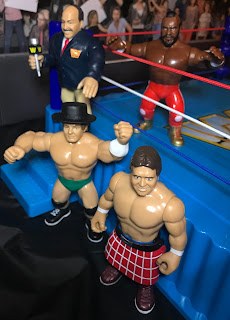 The sets come packaged in a brown cardboard outer box similar to the cases that figures ship to stores in. Beneath that is a beautifully done and very Hasbro-esque box that may remind you of the packaging for the first Hasbro WWF ring or even the Jake Roberts snake toy. Inside of this box are the four individually carded figures. While not exact Hasbro replicas, there was obvious improvement here over the card backs on the previous Mattel retro releases. Gone are the pointless "game app" ads and the dreadful and useless display stands.

What may be most notable with the new packaging is that the card stock appears to be nearly identical to that used by Hasbro all those years ago. This is a huge improvement over the thin and flimsy stock used with the previous Mattel waves. 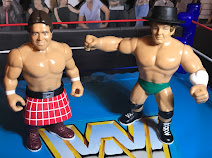 The four figures themselves are well crafted and fit with the original Hasbro figures as many in the Mattel retro line have. All four have heads that are unique to this style and correctly reflect the half-cartoonish visages of Hasbro WWF. I would venture to say that Piper is the weakest if only because I don't care for the "kicking" action feature. It is admittedly very nice to have Piper in wrestling gear in this format after all these years. His buddy "The Ace," Bob Orton has one of my longtime favorite "Real Wrestling Action" features with the clothesline. In true Hasbro fashion, Orton's hat is not removable.

Mr. T is a fun release as Mattel is obviously looking to get as much out of having his licensing rights as possible. They could've copped out and gave him some sort of punch but instead dug a bit deeper and decided to highlight his use of the airplane spin at the inaugural WrestleMania. My favorite of the four is Mean Gene and I really wish he was around to see and autograph these. The microphone is removable and even he has a fun action feature..."The Hard Hitting Interview." 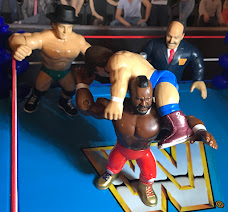 Personally I would've done as many new characters from the true Hasbro years (1990-1994) as possible before going into other eras. Still, 1985 isn't a bad route to go. One of the biggest mistakes of the original WWE Mattel Retro series was including mostly modern stars as well as some non-stars who never should have been allowed anywhere near the line. Some of them are fun, but the dark and brooding looks of most of today's sports entertainers just doesn't translate to the Hasbro look. I have a feeling that the next four packs will continue to have legends and the inclusion of a non-wrestler such as Okerlund will hopefully become standard. I know that Gorilla Monsoon and Bobby "The Brain" Heenan are high on everyone's lists.

If you didn't get these, I don't know what to tell you. They're unlikely to make these particular figures available again. That being said, I see them doing many more waves in the future. While we have plenty of licensed legends coming in this style from the boutique manufacturers, they're all missing a "Real Wrestling Action." It's not the end of the world, but it sure does stick out when we get figures like these that do have the long-time fan favorite feature.

Regardless of who you're rooting for, 2022 is sure to be the biggest year for Hasbro collectors in three decades. They're all so close to the real thing, it's like being in the ring...