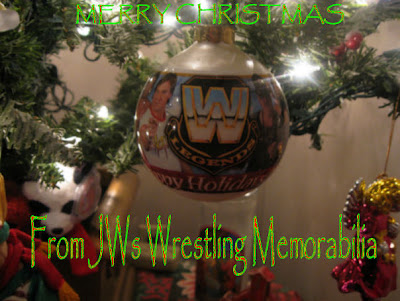 While tonight's Slammy Award broadcast on Raw may not quite have the feel of the Slammy ceremonies of yesteryear, I'm sure it will still contain the WWF/E style humor that the pseudo-awards show has been built on since its inception in 1986.

With such a fun concept and the marketing prowess the WWE has shown over the years, it's always been surprising to me that very little merchandising has been done using this particular idea.

Sure, video tapes of the 1996 and 1997 Slammy Award ceremonies are available, with snippets of the '86 and '87 events on various Coliseum Video releases. Several Owen Hart figures from 1996 featured Owen in his "Slammy Award Winning" tights. However, one would imagine that with the craze of replica title belts, surely a replica Slammy Award would be available. Or possibly a figure-sized Slammy Award included with various action figures over the years? Neither ideas have ever made production.

Two of the lone Slammy items in my collection are actually direct mementos from the '96 and '97 ceremonies themselves... 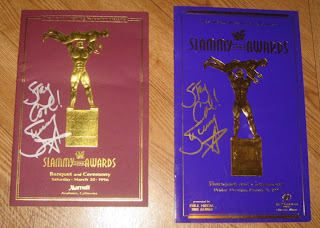 Both ceremonies had a program which was only available to attendees of the dinner/ceremony of those particular years. My own examples are both autographed by a Superstar who made her mark both of the years, the one and only Sunny. Each are beautifully done and while they do not include photos, they do feature an embossed rendition of the comical Slammy trophy itself. These do not show up very often at all and are most likely all but tucked away into collections worldwide. 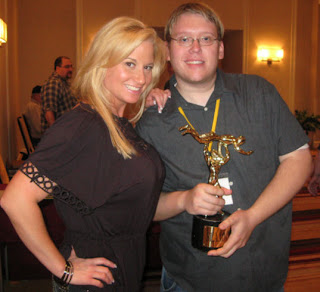 I leave you with a photo of your favorite blogger, yours truly, and the Queen of the Slammy's herself, Sunny, holding her Slammy Award for "Best Buns." One can only imagine how much more desirable the recent limited edition Sunny WWE Classic Superstars figures would be had they included little Slammy's...

There are two types of wrestling fans... 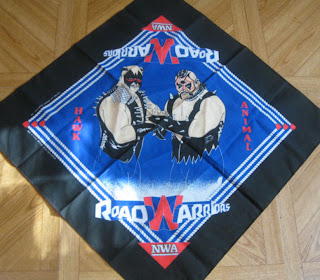 ...Demolition fans or Road Warrior fans. Personally, I've long been a Demolition guy, but I have to admit this is quite the cool piece.

This is the original NWA Road Warriors bandana put out by Jim Crockett Promotions in 1988. Some would argue that the lack of merchandising is part of what helped to put JCP out of business. The truth is, there were very few products offered by the promotion, therefore what is out there is coveted by collectors.

In addition to various programs and videotapes, some of which have been shown in previous entries of this blog, t-shirts, bandanas, and pennants of the promotions shows and stars were among the few items produced.