There's no doubt that society is ever changing. For better or for worse ideals and situations that were once unacceptable to the general public have rapidly been making a complete 180. No, we're not getting political here. We're staying on the track of collecting but perhaps in a bit different manner than usual. Collecting action figures hasn't always been the most accepted practice. To some it's just "collecting dolls." But what about playing with them? Surely only kids do that. Interestingly enough, adults have found a new way to "play" with toys ranging from superheroes to Star Wars to wrestling: action figure photography.

Go ahead and plug that hashtag in on Instagram. You will be amazed at what you see. Real events and matches recreated. "Dream" bouts and settings that never occurred. "Bookers" creating their own promotions and lineage. Even custom figures of wrestlers who never truly existed. It's all there. Taken with cameras ranging from professional jobs to the one packed right in your cell phone. Go ahead and look around. See what there is to see. I'll wait.

Did you see all of those cool pics? The truth of the matter is that "action figure photography" is an adult way to play with toys. And it's accepted. Did you take a gander at the "likes" and "follows" that these account receive? Escapism. Art. Fun. Whatever you want to call it, it's here to stay.

The action figure manufacturers themselves have totally helped. Figures are becoming more and more realistic every day. You're hard-pressed to find a wrestling action figure these days that doesn't have interchangeable hands included, not to mention heads and of course clothing and accessories. With varying ways to make a single figure appear visually, a crafty photographer can place that figure in any number of different situations with a variety of interesting results. Even mixing accessories and outfits from a variety of different releases can surprise the most seasoned toy photographer. 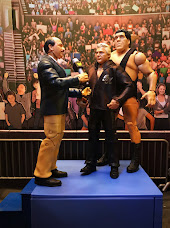 There are even some companies away from the licensed groups that are getting in on the action. Any variety of dioramas and backdrops can be found to make these photographs completely immersive. Sure, the Rebels can hop aboard a starship or Batman can surprise The Joker in a dark alley, but now wrestling rings can be set up in full-sized arenas. Need a backstage area and/or locker room? You're covered there, too. And of course there's no substitute for imagination and a little elbow grease. Heck, Mattel has supplied some fantastic interview backdrops as cardboard backing with some of their releases over the years. You didn't throw that packaging away, did you?

Believe it not, I'm of the opinion that this hobby will have a lasting effect on the collectible market itself. With more and more buyers opening their figures to have some fun, less will be left boxed. While some will argue that these modern figures are mass marketed and thus will never hold the same value as their counterparts from the past, just point out how lack of proper distribution (thought I'd avoid that word in this entry...) on some of the figures instantly cemented their collectability.

Now then, open up that Mattel King Harley and take a great pic! 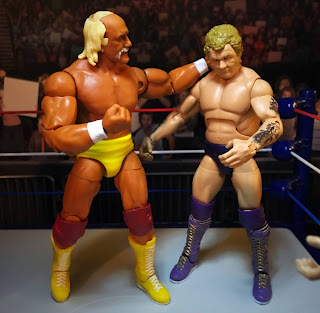 For being such a walking action figure as he was in life, Bam Bam Bigelow hasn't been immortalized in plastic near as much as he probably should've been. We've received one LJN, one Hasbro, two Toy Biz, one Jakks and now three Mattel figures. For a wrestler who looked like a beastly fireball with a career that spanned roughly two decades, the figure count is a bit underwhelming. It's also a bit surprising that not one of his figures reflects the outfit that he wore in what was easily his highest profile match. 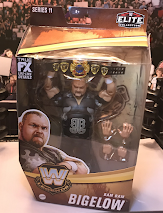 Mattel's WWE Legends Series 11 brings us Bam Bam in an outfit that we've seen once before as a figure but with a particular accessory that we have not. The series also includes Scott Hall, Big John Studd and Randy "Cream of the Crop" Savage. The packaging has remained consistent since the line returned and, according to those within Mattel, is not scheduled to change despite a new style soon to debut in the main line. With this particular color scheme, the shape has grown on me. The Legends line continues to be exclusive to Target and was the first wave not to be offered for pre-order. More on that later.

The Bammer is clad in his gray flame outfit worn most famously in WCW and ECW. The latter is what is being represented here due to the inclusion of a never-before released accessory: the ECW Television Championship. Bigelow also includes three individual sets of hands which are unique to the figure due to painted tape on the fingers. This gray costume was only seen once before in figure form thanks to Toy Biz in the late '90s. While Mattel easily could have reused the facial sculpt used in their previous two Bigelow releases, they instead chose to create an all-new one. I like both and I do feel that this one represents Bam Bam from later in his career as this figure is designed to do.

As there is a "chase" variant of one character in each WWE Legends wave (this time it's The Macho Man), I'm actually sort of surprised that it wasn't Bam Bam this time. The chase figure is a paint app variation of one of the figures while retaining the same sculpt and accessories. Seeing as the design of this gray costume with the "triple B" logo debuted with orange flames in 1995, the chase could've been that design. It wouldn't have hurt the value of the company's original release of that Bam Bam from over a decade ago as that figure had the original Mattel Bigelow head sculpt as well as his '95 entrance gear.

I'm still surprised that we've never seen "purple flame" Bam Bam done as a figure. It's the outfit that he wore from 1993 to 1995 as well as in his famous match against Lawrence Taylor at WrestleMania XI. Seeing as that it seems that Mattel's well is running dry as far as a wide variety of legends available to make, we could see the design pop up sooner than later. I'm all for it. 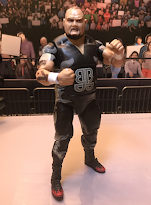 I'm also all for this figure. In addition to being a great likeness with a brand new accessory, it's proven to be easy to obtain. It has remained in stock on Target's website and many stores have received the figure in abundance. That being said, don't sleep on it. If you want it and see it available you already know to grab it. I will also add that this is a perfect candidate for "Figure of the Year." As I've made clear before, my qualifications include the figure being reasonably easy to obtain for a wide margin of collectors. This "Beast From The East" ticks all of those boxes. With WWE Legends 12 beginning to trickle into stores, grab the master of the flames before you get burnt.
Posted by J\/\/ at 12:00 PM No comments: