An Olympic Hero, A Showstopper, A Paragon, & A Lobster Head

The distribution may be flaky at best and Mattel isn't doing anyone any favors with some more than bizarre business choices, but another round of retro goodness is here. Thankfully, the line returns to its roots of two years ago in many ways and even improves in other areas. So much for predictions abound that the line was about to end, nothing in the foreseeable future seems to point in that direction, especially with some recently seen prototypes. 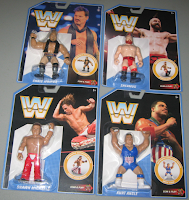 Another four superstars round out the latest wave to hit stores, including two Hall of Famers. Our lineup tonight is Kurt Angle, Shawn Michaels, Chris Jericho, and Sheamus. The best news to come out of this series is that the obstructions on the cardback are largely gone. The homage to the Hasbro "Real Wrestling Action" symbol is back and the fairly pointless stands are gone. Also largely reduced are the graphics advertising a game enabled by scanning the card with your cell phone. There's still a small note of it in the corner, but the barcode is now included on a piece of cardboard packaged behind the figure. 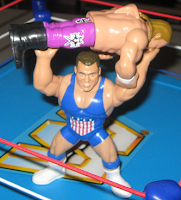 These four names are all fresh to the WWE Retro line and all fit in quite well. Angle and HBK are the most "retro" representing their looks circa 1999 and 2002 respectively. Sheamus and Jericho seem to appear in their most recent WWE incarnations. In a way I'd have preferred an earlier Jericho look, but how can you argue when this version of Y2J was so much fun? In my opinion Angle stands out the most, maybe because he's the closest here that could've actually been in the Hasbro line albeit a couple of years off. 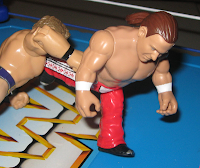 I'd have to rank Shawn Michaels as my least favorite simply because I'm not necessarily seeing HBK in the face. There's a fine line in how these WWE Retro heads should be done. While they shouldn't look like a regular Mattel figure head plopped onto a Hasbro-style body, there does have to be an almost cartoonish resemblance. Sheamus and Angle capture the latter perfectly. Jericho is good, but it may be just a bit too close to the regular Mattel version. In a nice change, all four have action maneuvers that fit their characters and don't interfere with the figure likenesses. 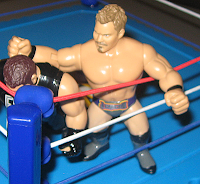 Only Jericho includes an accessory, that being his "Scarf of Jericho." It's very difficult to remove, but it will come off from around his neck with enough finagling. A gold medal accessory may have been a nice addition to Angle, but I can't imagine anyone deducting points without it being there. It is interesting to think that we now have three eras of Shawn Michaels in the Hasbro style, and I'm happy that we got a different look this time rather than The Rocker or The Heartbreak Kid again. The "Sweet Chin Music" action is pretty cool, too. 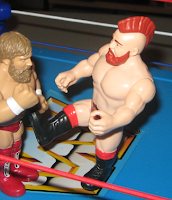 In my opinion the WWE Retro line is really picking up again. There
are some very wanted names coming for this format including Diesel and Goldust as well as surprises like The Iron Sheik and Junkyard Dog. The line has seemingly escaped from its days of a lot of dull colored characters translating into dull figures in a style that should not be dull. As long as the distribution stays fairly decent, I think that we could be seeing the "rebirth" of the Hasbro style go for a long while.
Posted by J\/\/ at 7:00 PM 1 comment: