More often than not, the topics of the entries in this blog are that of classic wrestling collectibles. There's nothing wrong with that. I, like many of you, enjoy the memorabilia of yesteryear. Once in awhile, though, I do enjoy highlighting new and upcoming collectibles. WWE and TNA are both very popular with children and young adults right now. Anytime that this is the case, you're sure to see merchandising galore.

Mattel is continuing to roll out product in their WWE line which began late last year. Numerous lines of single figures as well as double packs are plentiful on store shelves with many more to come. The WWE Legends line is starting to appear in stores with a second series slated for release in late-summer.

While Mattel promised a steady stream of new characters they have not improved upon Jakks often-criticized constant re-releases. While new characters such as Goldust, William Regal, and Dolph Ziggler have recently shown up in stores, the shelves are still filled with remake upon remake of Randy Orton, Batista, and Triple H. On the upside, new figures of Kelly Kelly, Drew McIntyre, and a 2009-version of Ricky Steamboat are all scheduled for release later in the year.

Jakks seems to finally be ready to release their new TNA figure line. At a special meet and greet on the weekend of the Slammiversary pay-per-view, TNA fans were able to obtain a signed set of the initial six figures in the Jakks line. Kurt Angle, Sting, Jeff Jarrett, Samoa Joe, AJ Styles, and Suicide are in the first wave with a two-pack set following shortly. Jakks will also have a Legends of the Ring line that is slated to feature grapplers from TNA, NWA, and New Japan Pro Wrestling. The first series includes Hulk Hogan (New Japan attire), Jeff Jarrett, Kevin Nash, Kurt Angle, and Sting in his classic WCW look. Scott Steiner was originally slated to be the sixth figure in the set and was later removed. It looks as if he may be released in Series 2.

Jakks has been getting heat among collectors for delays, changes in line-ups, and an overall feeling of uncertainty towards their TNA line. Perhaps the longer collectors wait, better quality as far as new faces and better likenesses will take center stage.

Trading cards are another popularity-gauging collectible in the wrestling industry. Tristar, as I covered in an earlier entry, has done a great job of producing and marketing TNA trading cards for a number of years now. Their TNA New Era set has captivated both wrestling and card 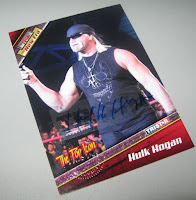 collectors alike and continue to be difficult to find at retail. The easiest way to purchase the cards is through "Blaster" boxes which retail for around $20. Inside the box there is a cellophane-wrapped pack of 24 cards and one special authentically autographed card.

Topps, the legendary trading card company that currently has the WWE license, seems to be following the WWE's current direction in marketing to children. While a line of trading cards was released last year, their 2010 offerings thus far have solely been novelty items. A card game titled Slam Attax as well as packs of collectible poker chips, dog tags, and stickers are the current Topps WWE product in stores. It would be welcomed by many collectors to see a return to the popular Heritage-styled cards using the WWE license in the near future.

In the next entry, we return to the past! No Hogan or Flair. How about more old school than that? Buddy Rogers? Killer Kowalski? Lou Thesz? More of "The Living Legend" Bruno Sammartino? All of those and more! Stay tuned!
Posted by J\/\/ at 10:17 PM