The Most Underrated Wrestling Cards Of All-Time?

In past entries I've documented many trading card offerings from the WWF/WWE, NWA/WCW, and TNA. The different companies have each offered autographs, pieces of memorabilia, and simply unique cards themselves which have been placed in the high esteem of wrestling and non-sport card collectors alike. There's one wrestling card set, unaffiliated with any organization or promotion, that may be the most underrated and overlooked of them all.

In 1991, a company out of Pittsburgh called Imagine Inc. produced a trading card set entitled Wrestling Legends. The cards were obtained in complete sets rather than packs and contained a variety of classic wrestlers dating from the 1950s to the 1970s. 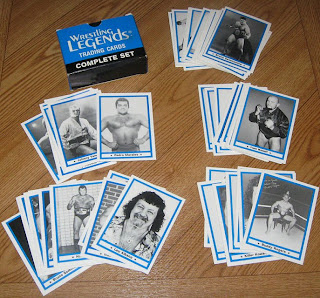 "Nature Boy" Buddy Rogers, Lou Thesz, Bruno Sammartino, Harley Race, Mil Mascaras, Ray Stevens, Johnny Valentine, and Killer Kowalski are just a few of the names included in the basic 60-card set dubbed the "Regular Edition." These cards all had a white and blue border with a white card stock back and a short piece of trivia about each star.

There were also two other editions sold at the time. The "Champions Signed" set was a 65-card set that included the basic 60 cards along with five unique gold-bordered autographed cards of 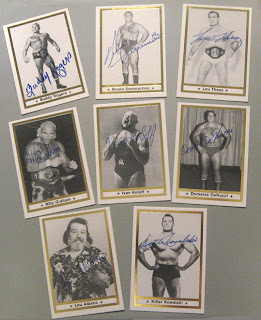 The granddaddy of them all was a 68-card "Deluxe Signed" edition featuring the basic 60 cards, the aforementioned five autographed cards, and an additional three autographed gold-bordered cards of Killer Kowalski, Lou Albano, and Dominic DeNucci.

The set, especially the Deluxe Signed edition, is a really fun and special collectible to have. It features some stars who make their lone trading card appearance and others who never seemed to get a fair representation as far as wrestling memorabilia was concerned.

Special attention should be paid to the autographed cards featured in the latter two editions. There are many collectors who simply won't accept an autograph that wasn't signed in their presence. One such way that some of these collectors are appeased is through obtaining the autographs on trading cards that come straight from the manufacturer with an authentic signature. While this set does not have the markings and other points of "proof" that more modern autograph cards enjoy, it should be strongly considered that the "Champions" and "Deluxe" sets were produced solely for the inclusion of the autographed cards. It can also be taken into account that "The Living Legend" himself had a hand in convincing some of these legends to participate in this venture.

Recently I had the opportunity to contact Tim Ferrante. Mr. Ferrante was the vice-president of Imagine Inc., the publishing company that produced this card set. The company, which counted special effects artist Tom Savini among its owners, was also responsible for bringing Bruno Sammartino's autobiography to the market. Being that Imagine Inc. was largely a producer of horror entertainment, Mr. Ferrante names another member of the company's ownership team as the reason for venturing into the squared-circle. 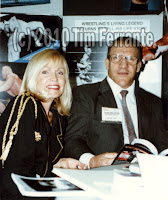 Bruno with B-Movie Scream
Queen & Friend of Imagine Inc.,
Bobbie Bresee
"I give credit to Bob Michelucci for bringing the Wrestling Legends concept (and Bruno's bio) to the company," said Ferrante. "And to be perfectly frank, I wasn't keen on the idea for a variety of reasons. Bob did a fine job with the project and I point to him for seeing everything through." 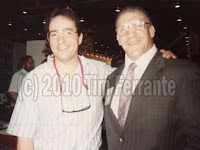 Despite his reservations, Mr. Ferrante (seen at right with Mr. Sammartino) has fond memories of working with "The Living Legend" in both the book and trading card projects.

"Bruno is one of the all-time greats ... both professionally and personally," said Ferrante. "Most vivid memory was patting him on the back one morning and it was like patting a steel wall. Absolutely solid."

And how about those great and now very rare autographs included in the set?

"Bruno was the guy responsible for getting some of the autographs in the signed Wrestling Legends sets (Champions Set and Deluxe Set)," remembers Ferrante. "Bob Michelucci may have arranged some, I can't be sure. But I specifically remember Bruno 'strong-arming' some of the retired wrestlers who weren't interested."

With the passing of Albano in 2009, the set includes four "deceased" autographs which should be of particular interest. Rogers, the first WWWF champion, died just a year after the card set was produced, with Thesz following in 2002 and Kowalski in 2008. The finality of obtaining some of these signatures has not been lost on collectors, with the autographed sets often fetching over $100.

All in all, the Wrestling Legends set is one that should not be ignored by any collector. When it does show up for sale, the Regular Edition can be had for around $10 to $20. Whether you're an autograph collector looking to collect the signatures of the living stars in the set or simply enjoy incredible vintage photos of the stars of yesteryear, this set should rival the somewhat overpriced Wrestling All-Stars card set produced just a few years earlier.

In closing, I'd like to thank Mr. Tim Ferrante for providing some great memories and insight regarding his former company's product as well as the pictures in the latter portion of this entry.

Next time...more talk of legends, autographs, and champions!

how much do you think the wwwf first edition of wrestling action magazine is worth? without the autographs? thanks. Cant find it anywhere.

I've seen it sell for around $100, but this was a few years ago. In the future I plan on doing an entire entry devoted to Wrestling Action, my favorite (albeit short) magazine run.

Does anyone know how many sets were autographed for the 1991 legends cards?

Don't have a number, but they still pop up fairly frequently.

What size are the cards?