I've always enjoyed Mark Henry.  Maybe it's because he has a unique look that may never be duplicated.  Maybe it was that time back in the Nation of Domination days when he pointed yours truly out to The Rock at a house show.  I was proclaiming my allegiance to the Nation, after all.  Maybe it was because I always knew that he had a run in him like his recent monster stint where he became one of the top heels in the business.  Regardless, you have to admire his longevity.  Injuries aside, 16 years in one company is a lifetime in the wrestling industry.

Even though the Olympian was around for the entire Jakks-WWE association, he seemed to receive fewer figures than some of his counterparts.  This was most likely due to his aforementioned injuries and also thanks to being occasionally lost in the shuffle.  Mattel has already produced several Henry figures in their WWE line and all have proven to be hits among collectors.  Several of them even reached secondary market prices which were drastically above retail.  At the same time that "The World's Strongest Man" was dominating in the ring he was also clearing the shelves.

The most recent Mark Henry figure is one of four figures in the Toys "R" Us exclusive "Best of Pay-Per-View 2011" series.  All of the figures are in attire to match what they wore at the respective pay-per-views.  Henry is in the blue singlet worn at Money In The Bank 2011 while the others in the series are John Cena (Over The Limit 2011), Christian (Capitol Punishment 2011), and Rey Mysterio (Royal Rumble 2011).  Considering that the other three figures have countless re-releases already on the shelves, Henry is the most desirable in the set. 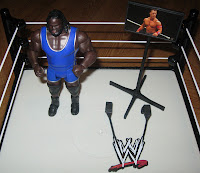 Similar to the Michael Cole Build-A-Figure, buying all of the figures will net you a "bonus."  Each of the figures also includes a piece of the current WWE interview set.  While the other three figures are each packaged with a piece of the plastic "curtain," Henry's figure comes with the flat screen monitor, monitor stand, and hanging WWE logo.  The crafty (and thrifty) child will realize that these are the most important pieces to have and create his or her own curtain instead of buying yet more figures of Cena, Mysterio, and Christian.  I know I certainly would have.  Then again, back in my day, when we walked up snow-covered hills BOTH WAYS to school, we had to create our own wrestling arenas and interview areas!

Another incentive to purchase these figures is a bit more attractive.  Purchasing just three of these figures will entitle you to a free COO Triple H figure when you mail in the receipt and proofs of purchase from the figure packaging.  Details are available right in Toys "R" Us stores and online.  As a huge fan of wrestling figures clad in business suits, another thing that we didn't have "back in the day," I'm sure that we'll be seeing Trips reviewed here in the near future.

As for Mark Henry, I'm reminded of the old line about the LJN King Kong Bundy figure.  Collectors have always joked that you got "more for your money" since he was so much bigger than the rest of the line (and could be used to attack your friends...something that we didn't do back in the day).  Henry definitely resembles that remark, especially when taking into consideration how thin some of the Mattel WWE figures have been.  Henry fills the plastic bubble nicely and, along with the accessories, makes it look like you're getting your money's worth. 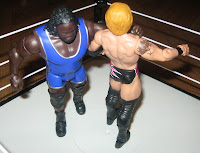 Mattel absolutely nailed Henry's unique body in the design.  The royal blue singlet color is very appealing and the side "strongman" logo as well as "WSM" (World's Strongest Man) lettering down the back is spot on.  Although this is the first Mattel version of Henry that I've decided to add to my own collection, it was while looking at the first release that I noticed just how perfect the short yet bulky arms are.  It's the former World Heavyweight Champ in his finest action figure form to date.

The one detraction for me is the facial likeness.  While it is very close, he doesn't look quite angry enough.  The Jakks Mark Henry face wins out here, but it isn't like Mattel's is terrible.  I do believe that this likeness was originally used by Mattel when Henry was still a babyface which would explain its reuse.

This figure could easily be called a highlight of the Mattel-WWE association thus far.  With the practice of reusing body styles in wrestling action figures going back to 1985, it's refreshing to see such a close design produced for a single character.  When you include such cool accessories that would work in any collection (hanging the WWE logo above a display of the figures would be ideal), you have the makings of a great figure. 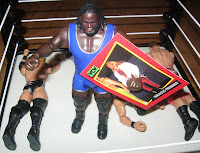 My advice?  If you're a fan of Henry or the cooler Mattel efforts, buy it!  Similar to the Build-A-Cole series Bret Hart figure, Henry seems to have either shipped separately or in lower quantities than the other three figures in the set.  This situation (for both Henry and Hart) seems to have been rectified with a larger presence now in Toys "R" Us stores nationwide.  Both figures popularity, however, will nullify the commendable efforts to bring more to the shelves.

Rumors of retirement for "The World's Strongest Man" have been impending for months.  Whether this is true or not has yet to be revealed, but this may be one of the last Mark Henry figures produced.  Just another reason to pick up such a great figure.  And if you don't?  Well.  Somebody's gonna get their...
Posted by J\/\/ at 7:00 PM