Occasionally there is some wrestling memorabilia produced that leaves you shaking your head.  Sometimes, you're buying and enjoying those very items while still shaking your head.  It all comes with the territory of being a wrestling collector, especially in the days of a "PG" rated wrestling product that is partially marketed to children.  When a popular toy license such as WWE collides with a children's toy fad, the possibilities can be endless.  Behold...WWE Squinkies.

What the heck is a Squinkie?  Basically, it's a squishy rubber figure a little under an inch high that comes in a plastic bubble.  They're sort of like toys that you would get out of a machine at a store, but they remind me exactly of the "Power Ups" contained in bubbles in some of Nintendo's Mario Party games.  Instead of obtaining them in machines, they are purchased in packs of twelve with nine of the characters showing and three obscured in colored "mystery" bubbles.  Produced by Blip Toys of Minnetonka, Minnesota, the WWE Squinkies were all released in 2012.

The first three sets intrigued me upon their arrival in stores.  A mix of current stars and legends is rather odd for a toy basically aimed at kids, but I wasn't complaining.  At around $13 a pack, I originally had decided to hold out.  Recently, I picked up the first three sets for a mere $2.99 per pack.  I then discovered that two more sets were produced, with slightly different card art and all new characters.  Amazingly, these sets were also already being clearanced out.

If you were a child of the '80s, you may remember Coleco's "Mash'ems" toys.  These remind me of extremely scaled down WWE versions of those toys in that they're deformed figures that can be mashed down yet bounce back to their original shape.  The likenesses are very hit or miss, but most from the first three sets can be easily deciphered.  59 different characters in all have been produced (60 total, two versions of Rey Mysterio were made) and include Triple H, The Rock, John Cena, Sin Cara, Brodus Clay, Kevin Nash, Goldust, Big Boss Man, Yokozuna, Sgt. Slaughter, Kelly Kelly, CM Punk, and Hornswoggle just to name a few.

As mentioned above, each pack contains three "mystery" figures that are packaged in colored bubbles.  Seeing as that their names are listed on the back of the packages of the first three sets, I'm not sure what makes them such a mystery.  The mystery figures of Series 4 and 5 are a different story.  While "silhouettes" of the mystery figures are shown, the names are not.  Vickie Guerrero, Beth Phoenix, Alex Riley, and Jimmy Uso are fairly easy to figure out, but it took Blip Toys to confirm that the other two are indeed Dusty Rhodes and David Otunga.  It isn't obvious to figure out just by looking at them.

Although the first three series are very distinct as to who each Squinkie is supposed to represent, the same cannot be said for 4 and 5.  Since each Squinkie is basically a head, hands, and feet, very little shows of the body.  Most of the characters in those final series have dark hair, black shoes, and non-descript facial features.  Upon first glance I thought that The Shield were in one of the sets, but it turned out to be Tyler Reks, Justin Gabriel, and Mason Ryan.  The worst is undoubtedly The Great Khali who is wearing wrist tape and looks like "Prime Time" Brian Lee.  That being said, these last two series contain all four Divas in the collection and anything that includes Dusty is okay with me...even if it barely resembles "The Dream."

What I really like about these toys is the depth of the line.  Cena, Randy Orton, and Sheamus are on any kind of merchandise you can imagine, and rightly so.  When mid and under carders make merchandising, it makes me smile, as does the inclusion of Legends.  As a kid, I would be thrilled that the likes of Curt Hawkins and JTG were in this line.  Even Squinkies need to job to other Squinkies!

Though it seems that Squinkies started as primarily a girls toy property, other boy interests such as Marvel Super Heroes have been produced as well.  Further research shows that some cool toys that utilize the Squinkies while in their bubbles, such as claw machines and the like, are also available.  It's a shame that it looks as if no such add-ons will be produced for the WWE Squinkies, although it would be interesting to hear if any were ever on the drawing board.  There does seem to be some generically styled Squinkie peripherals available, one of which includes a small wrestling ring.  Perhaps some of those could be used to create a game with the WWE stars. 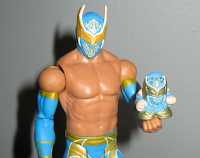 These little guys (and gals) are quirky and fun.  The likenesses, especially with the later examples, aren't always quite there, but you can't expect much from a figure that is under an inch tall.  Many collectors love any wrestling figures that are of odd scales and designs.  These sets would fit right in.  Now may be the time to snatch them up, as I'm sure they are hitting clearance in many areas just as I found them.  At full price I would most likely pass, but for a little over $20 for sixty figures, you can't go wrong.

I bought all of these for my son only regret is that there isn't a Daniel Bryan but maybe they'll be more sets.

How did you figure the mystery figure is Dusty? It's been driving me nuts trying to figure out who it is. Besides the hair the only other tell is that finger tape on one hand and wrist tape on the other

Someone somewhere on the net (I can't remember where) contacted the company and they gave them the full list. Like Dusty some of them were a bit of a stretch...

Lol interesting. I was thinking it was Billy Gunn but that's a stretch as well. Thanks for the reply. Love the blog keep it up. Ever think about posting some of your old WCW stuff on the WCWworldwide.Com site?