The Brain That Roared

Brain. Weasel. Fighter. All words that can be used to describe Bobby Heenan. The loss of the legendary manager this past week has been felt throughout the world. If you were a wrestling fan from the '60s through the '90s, there's a good chance that Heenan entertained you in some way, whether you loved him as "The Brain" or jeered him as "The Weasel." If you followed his journey in the past fifteen years, you know that he could have also been called "The Fighter."

It was no secret that a battle with throat cancer took its toll on Heenan. Although up until about ten years ago "The Brain" was able to still make entertaining appearances throughout the wrestling world, the effects of his cancer treatments began to take their toll. Ultimately, Heenan had to have his jaw removed. While this did change his appearance, his attitude and will to live kept him going. Accompanied by his loving wife Cindy, "The Brain" continued to travel to various conventions and events where he could once again greet friends and fans alike. Though he could talk very little, the always boisterous Heenan was still able to make everyone laugh through gestures and the familiar twinkle in his eyes.

Bobby Heenan was wrestling's answer to both Johnny Carson and a great sports coach. He had the personality of a golden age comedian but brought legitimacy to the idea of a great manager existing in the wrestling business. He could be highly entertaining in the latter role, but his promos always left you thinking that there was a great chance that his men would walk away victorious. Nearly 100,000 fans certainly believed that Andre the Giant could defeat Hulk Hogan at WrestleMania III. Who talked them into the Pontiac Silverdome? Bobby Heenan.

Behind the scenes, Heenan was often in charge of directing the promos for others. Who better to teach that art than one of the best? And if "most quoted" equates the best, Heenan may have very well been it. Just ask Koko B. Ware's mother. Her name? Tupper. Or Tito Santana's sister who performed at WrestleMania VIII. You don't remember Arriba McIntyre? Don't go helping any of your buddies, because "a friend in need is a pest." And if you ever got agitated towards "The Brain," he'd remind you that "you don't have to yell at me, I'm not blind!"

At a very young age, I can still remember my dad telling me that he'd been on a plane with Heenan and saw him taking the time to sign autographs. As a kid, this didn't strike me as unusual. I guess I was still goodhearted enough not to question why a "bad guy" would do that. As an adult, I still understand. While the Bobby Heenan character was underhanded, he wasn't completely loathsome. A great help with the latter part of the image was thanks to Gorilla Monsoon. You always got the feeling that the two co-hosts had a mutual admiration even while bickering on commentary or during their years on Prime Time Wrestling. It was a comfort for so many of us to learn in later years that the two were indeed close friends in real life.

A few days ago I had Tweeted that a bellowing "Will you stop?" had to be heard at the Pearly Gates this week. After a few moments, I can only imagine Gorilla following up with, "I'll have you thrown outta here, Brain!"

Thanks, Bobby, for all of the laughter, joy, and entertainment you brought to us "ham n eggers" and our favorite past time. We always knew that you loved us humanoids... 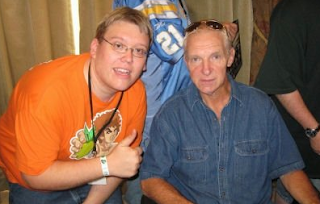