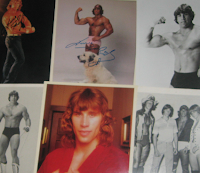 Collecting signatures of long-deceased stars can often be a trying endeavor. As I've stated at other times on this blog, forged wrestling signatures are few and far between. There just isn't enough reason for someone to do it. The ones that do exist are fairly blatant and/or are sold by some now notorious names on a popular auction site. Even with the realest of the real, there's no true guarantee that anything was signed authentically without you seeing the autograph signed right in front of you. With long gone names, sometimes a really good chain of acquisition and ownership simply has to do. When collecting most of the Von Erich clan, this is usually the case. 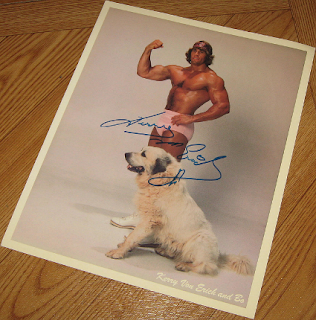 The nice thing about collecting Von Erich signatures is that the boys signed a lot. Just pull up any World Class Championship Wrestling episode on WWE Network and you're bound to see a photo or two being signed. WCCW sold many 8x10s for the stars to autograph, and many of their fans have kept these treasures over the years. The boys, being the Texas heroes that they were, also did any number of personal appearances where autographs were given to send the legions of fans home happy. My favorite member of the family, Kerry, was no stranger to this. Even though we just hit the milestone of twenty-five years since his death, his autographs can still be found. 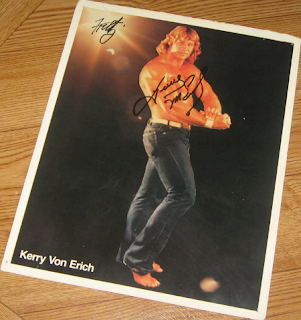 One of the most popular 8x10s of Kerry sold by WCCW included his dog Bo. Another featured Kerry seemingly caught in the light of a sunburst. In the example that I own, father Fritz even signed in the "sun" itself, as if he were the shining light to guide Kerry to stardom. Both of these photos, as shown, feature full "Kerry Von Erich" signatures, but that was not always the case. Some examples were simply signed "Kerry," likely in a rush situation as shown so often on World Class television episodes as the boys were being rushed to the ring at the Dallas Sportatorium. 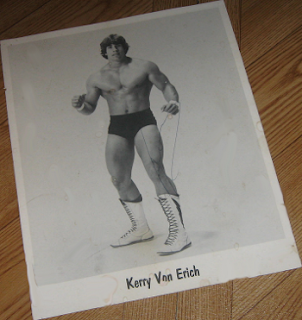 Many stories of the Von Erich boys signing exist. When you can acquire a signature with a story or even appearance advertisement it makes the item all the sweeter. Many of the female WCCW fans held onto their collections over the years which has been a prime source for myself acquiring the signatures of Kerry and other family members. 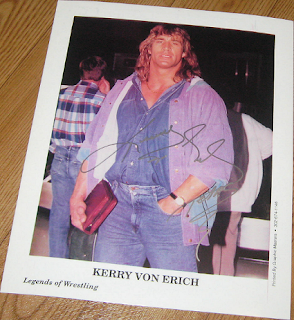 Kerry was signing right up until his death in 1993. In January of that year the former "Texas Tornado" appeared at a convention and show in Philadelphia. A series of photos of the stars who appeared at this event seem to have originated here. They are made to look like promotional photos and have a "Legends of Wrestling" logo on them. There are items out there, including my example of the aforementioned photo, signed by Kerry in some sort of silver pen. While normally this would be a red flag when associated with someone who passed away before silver Sharpies came into existence, there were other writing apparatuses at the time which produced a similar look. 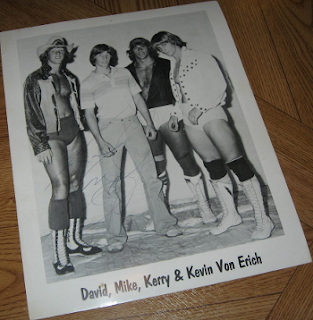 For all of troubles that they eventually found, the Von Erich boys were said to be good to others and specifically to their fans. It doesn't surprise me that evidence of such, in this case pressed to paper, still exists long after they have become memories to those who knew them and legends to those who watched them in the ring.