No matter where you look, stylized mini figures are all the rage. It may have started with the never-ending Funko Pop! line, but it's branched out into just about every kind of pocket-sized figure that you can imagine. Wrestling, as popular as it is, has it's share of varieties, but our focus at the present are the Micro Brawlers. The line, created by Pro Wrestling Tees, has taken a plethora of independent stars, legends, and foreign stars and combined them to form quite the stable of micro stars. Of all of the names that have appeared so far in the line, here are my top five picks. 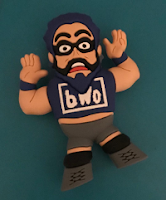 When you're talking wrestlers made to become a toy, you're literally screaming the name "The Blue Meanie." Just seeing his first action figure in recent years, Meanie has become one of the more recent entries to the Micro Brawlers line-up. Clad in his bWo shirt, the Meanie is posed doing exactly what he should be doing, The Meanie Dance! Meanie also fits in perfectly with the line, qualifying as both an indy wrestling star and a legend of both ECW and WWE. 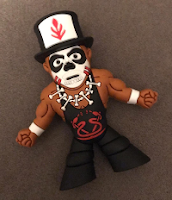 As far as characters go, there's never been a crazier one than Papa Shango. I have no idea how a Papa Shango figure outside of the WWE banner is legally allowed to be made (complete with a WWE picture on the header card), but here we are. If Shango is allowed to be made, does that mean that other Charles Wright characters, such as The Godfather, are fair game as well? Time will tell, but Papa Shango was certainly the perfect one to start with. 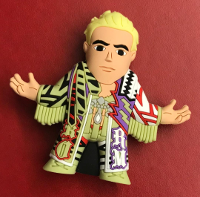 Someone seeing his first introduction into the U.S wrestling figure market is Kazuchika Okada. The current IWGP Champion has taken the country by storm and can easily be cited as a big part of New Japan Pro Wrestling's banner success here in the states. His trademark pose and colorful entrance gear make this an irresistible figure to add to your Micro Brawlers lineup. "The Rainmaker" is also slated to be one of the first figures in the upcoming NJPW action figure line to be released stateside. 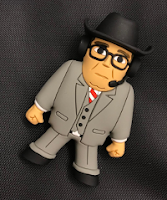 Announcers rarely see too many figures, but Jim Ross isn't just any announcer. Good Ol' JR is the first broadcaster to break into the Micro Brawlers line and hopefully will not be the last. Can you imagine a Micro Brawler Jerry Lawler to stand at his side? I'm not saying that it will happen, but it's certainly not a bad idea. With his recent resurgence in popularity, a Tony Schiavone Micro Brawler would be pretty damn cool, too. Nonetheless, JR may actually be my favorite of all of the Micro Brawlers thus far. Unexpected and unique, grab this Sooner while you can. 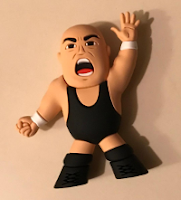 In a bittersweet entry to the line in 2019, we received a Micro Brawler of King Kong Bundy the same year as his untimely passing. While Bundy has had many figures over the past 34 years, this is the first Bundy to be posed demanding his infamous "five count." Bundy was another character who was made to be an action figure, just by looks alone. No one has any idea if this will be the final figure of Bundy, but it's certainly one that you'll want to add to your lineup.

It's fun to pick and choose who you want. There are many names that I'm unfamiliar with, mainly independent stars, who I choose to pass on. That only leaves more room on the shelf for the absolute home runs like the five shown above.