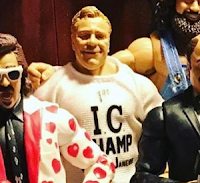 And what does the year boil down to? Why it's "Wrestling Figure of the Year," of course! Once again collectors were inundated with plastic representations of their favorites from yesterday, today, and tomorrow. Some stars saw their first time being immortalized in such a way while others made their first journey into the toy box in quite some time. Before we get to the winner (as far as this blog is concerned), we'll take a brief look at some other possible choices.

When you're talking wrestling figures, you have to be talking Mattel. Unfortunately, the company which holds the WWE license decided to louse up a lot of the fun of collecting by making many of the most desirable characters limited. This practice looks to be continuing into 2020 much to the pleasure of no one. Two great figures were released in that asinine way, those being Pat Patterson and Sensational Queen Sherri. Patterson saw his first ever action figure in an over 60 year career while Sherri saw only her third and arguably coolest.

Mattel brought other characters back with "Ultimate" editions. While there was a separate figure line called "WWE Ultimate Edition," I was ultimately more partial to the most recent release of "Hacksaw" Jim Duggan. Included in the now cancelled "WWE RetroFest" line designed to evoke memories of the WWF WrestleFest video games, Mattel's newest Duggan figure reflects three different periods in the brawlers WWF career. Depending on which accessories you use, ol' Hacksaw can wear his late '80s t-shirt, his regal "King Duggan" crown from 1989, or his 1993 singlet. They even created an all-new "tongue out" head to recreate some of Hacksaw's goofier moments. 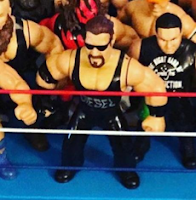 The company most famous for Barbie wasn't done there with creating cool figures or cancelling cool figure lines. At long last, "Big Daddy Cool" Diesel made his debut in the WWE Retro figure line. The line was virtually a continuation of the legendary Hasbro WWF figure collection of the 1990s. While Diesel was planned for that line, the figure never saw the light of day. In 2019 Diesel was finally produced in the beloved style...and the line was abruptly cancelled. Thanks again, Mattel. But the constant disappointment from Mattel didn't damper 2019. Bringing smiles to many was the company Mego, brought back to life a year earlier by its original founder Marty Abrams. Though the company originally began creating action figures a half century earlier, it wasn't until 2019 that Mego introduced its first wrestling figure. Who better to start with than Andre the Giant? While the mammoth Frenchman wasn't quite as lifelike as other releases, the figure included a certain charm that only the classic Mego figure style can capture. 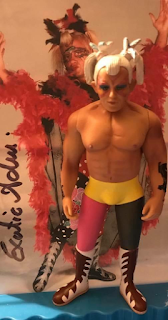 Exotic Adrian Street! Yes, in a shocking and unexpected move fitting from the Welsh grappler, the flamboyant and gender-bending wrestler had his own figure produced. While clicking his name in the labels below will bring you to a full review of the figure, what are you waiting for? Hop over to eBay and grab one for yourself. They're only available from Street himself!

2019 is over! Some are cheering, others are lamenting. Whichever camp you find yourself in, remember that 2020 should be even bigger in the wrestling figure world. Will the new NJPW figures prove to be major players? Will AEW reveal a figure line? Which legend will Mattel produce and screw us over on by making limited next? Let's watch the ball drop and find out!
Posted by J\/\/ at 7:00 PM