It's that time of year. WrestleMania season. You can practically hear the classic 'Mania song in your head. Well, maybe not that so much anymore. It doesn't quite have the same excitement for me anyway, but that's no reason not to celebrate the past. Isn't that what we've always done here on this blog? And on MarketWatch, we've always taken a look at a handful of items and their most recent selling prices at auction. This time we're looking at some of the more uncommon items celebrating "The Greatest Sports Entertainment Extravaganza of All-Time!"

*March 31, 1985. New York, New York. Madison Square Garden. It's where it all started. Hulk Hogan. Rowdy Roddy Piper. Mr. T. Andre the Giant. Muhammad Ali. Cyndi Lauper. Liberace! The stars were out for WrestleMania and it's no surprise that fans wanted to watch the event again and again. While the classic Coliseum Video clamshell VHS video is well-remembered, seen a bit less is the Laserdisc release. A total of four WWF Laserdisc releases were done by Coliseum Video, with WrestleMania arguably being the most visibly striking of the entries. The classic Hogan-T poster art will never be forgotten. An example recently sold for $45. 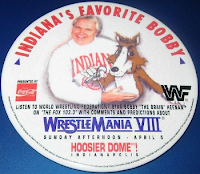 *Another star who appeared at the first WrestleMania was Bobby "The Brain" Heenan. The legendary manager and broadcaster actually made an impact at the first nine WrestleMania events not to mention some cameos at later installments. In the build-up to WrestleMania VIII, Heenan began referring to himself as "Indiana's Favorite Bobby" in reference to legendary Indiana Hoosiers coach Bobby Knight. A pinback button was produced and given out to promote Heenan's appearance on radio station "The Fox 103.3" leading up to the 1992 installment of WrestleMania. This rarely seen item recently sold for $25.

*Many collectors love to snap up the WrestleMania programs, but some are a lot easier to find than others. Although it was technically WrestleMania XVI, the event in 2000 was aptly named "WrestleMania 2000." There was "A McMahon In Every Corner" and all four appear on the cover along with The Rock, Triple H, The Big Show, and Mick Foley. Needless to say with it's inclusion here, this is not one of the easier WrestleMania programs to come by. A recent example sold for $169.99 which is down from the $250 that I personally sold one for over a decade ago. 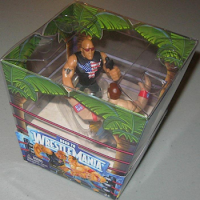 *Speaking of The Rock, his most recent WrestleMania matches have seen him pitted against John Cena. While their second battle is near and dear to me due to the fact that I was there, their first clash has meaning to me as well seeing as my predictions on the bout were included in the Pro Wrestling Illustrated issue previewing the match. That encounter also saw a special "Rumblers" two-pack produced by Mattel. Rumblers were small, cartoonish looking figures that were a big hit with collectors of all ages. The packaging for this particular set was unique, a lot of fun, and was likely a major reason for the item to recently sell at auction for $50.

*If you're looking for an affordable relic from an actual WrestleMania event just look to the skies. Well, it may be too late for that now, but you can still grab some of those great "dollars" that have fallen from the heavens (or at least the ceiling) over the years. Shane McMahon had the falling "money" gimmick as did Floyd "Money" Mayweather, but the first was back at WrestleMania 21. That year it was none other than JBL who "made it rain" during his entrance at the big event. One of those "One-Hundred Dollar" bills recently sold at auction for $25.

If you're going to collect a theme, where better to start than the biggest show of the year? It may pay to wait until after "WrestleMania Season" is over, but you can bet that there will always be classic items available with thirty-five years worth of memories to relive packed into each one.
Posted by J\/\/ at 7:00 PM