Opening vintage toys has always been a touchy subject with collectors. To some it's almost taboo. Why open one up when there are plenty of loose examples around? Why destroy another boxed or carded version of which will never be replaced? There are plenty of answers to those questions, the most obvious being personal decision. If you own something you can do with it whatever you please. But it was a chance bargain purchase and reconnecting with a fellow collector that led me to the topic of today's entry. 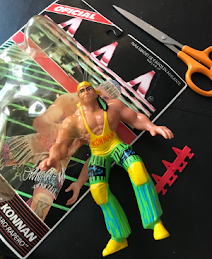 Longtime collector extraordinaire Chris Pesqueira could be considered "The King of the Minty Loosies." He has made purchasing vintage action figures and opening them into a science. You see, he's not opening just any vintage figures he can get his hands on. He understands the importance of carded collecting. It's also not cost effective. By searching out boxes and cards that aren't exactly in the best of shape he isn't really doing any disservice to carded collectors who usually want pristine packaging. In turn he also isn't spending the small fortune that one of the nicer examples can yield. He's simply getting a beautiful loose figure in mint condition that he can proudly add to his collection. 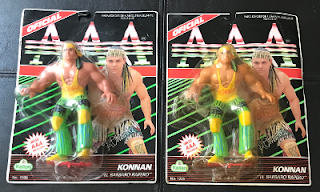 I've long considered opening a carded 1994 Kelian AAA Konnan figure that I've owned for about a decade. I had initially purchased it to be signed, but the lucha legend no-showed the same event twice and I haven't run across him since. The packaging was not great to begin with, but for my purposes it was "good enough." Some creases and bubble cracks were part of the deal and something I was very much willing to live with considering that the Kelian figures aren't ones that you come across every day. Often times a signature will drown out any flaws, at least to my autograph-loving eyes.

Recently I came across a deal for another carded Konnan. This example was in much better shape at what I felt was a very reasonable price. Why not buy it and open up the old one? The thought of finally having the particularly colorful figure in a loose mint example complete with stand wasn't something that I felt I could pass up. I did it and here we are today. 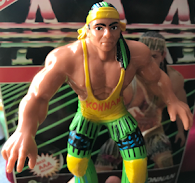 The Kelian AAA line is a lot of fun. It's often confused with The Original San Francisco Toymakers CMLL line from the same era. The difference is that the latter had far less characters produced (a total of six) and is better remembered in the United States as they ended up at Dollar Tree stores around the country. I'm not the only one with fond memories of grabbing Vampiro and Ultimo Dragon right off the shelves. The Kelian AAA line is best known for having the first Rey Mysterio Jr. figure, which has a price that has soared as high as the man himself.

Like the aforementioned Toymakers CMLL line and their later WCW figures, the Kelian AAA wrestlers are solid with no articulation. They make up for that in detail. The colors are absolutely beautiful and are really showcased on this figure thanks to this being the era where Konnan was literally colorful from head to toe. It's a fairly good facial likeness as well in a line where more of the characters were masked than were not. My memories of this era Konnan largely stem from his feud with Jake "The Snake" Roberts that did great box office business. Like many, I followed the conflict through the pages of Pro Wrestling Illustrated and its sister publications which seemingly covered it monthly.

Another advantage to opening a Kelian AAA figure is that you're going to get the AAA logo stand included with each figure. It almost never shows up when these figures come up for sale loose and is a surprising inclusion in an era where things like this weren't the norm. 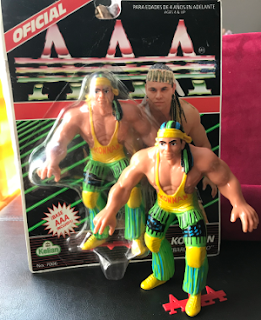 Remember, toys were meant to be played with. Even if you aren't playing, maybe you just want a nice, shiny figure on display instead of a beat up used one. It makes perfect sense and is nothing that any collector should feel guilt over. If you're spending the money it's yours to do with as you please.

Now, if you're thinking of opening that carded LJN Dynamite Kid...