A New Kind of "Elite" Figure 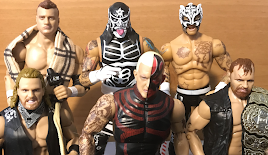 It's been a long time here on the blog since I've reviewed a non-WWE product that wasn't a one-off or something of that nature. The big guys finally have viable competition here in North America and slowly but surely that is trickling into merchandising as well. While I've been cautiously partaking in all of the new goods myself, I figure that the first set that I fully purchased would make a good starting point in what I'm sure will not be the last All Elite Wrestling figure appearance here on the blog. 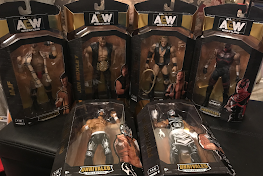 Personally I don't watch the product. Like WWE the presentation simply isn't what I look for, but like with the talent employed by "the other guys," I greatly respect and admire them. That being said, I had a load of fun at one of the early tapings in 2019 and that even made its way into that very blog. The only televised product of recent years that has fully captured me was NWA Powerrr. That, sadly, seems to be dead in the water no matter what we're told. Get a similar format with much of the WWE and AEW talent? I'd be there. So if you're asking why I still purchase figures of modern talent despite not watching the programming, there you go.

There are remnants of the Jakks WWE team within Jazwares, the company producing the AEW line, thus the similarity in the packaging. In fact, the resemblance to the Classic Superstars packaging does not end aesthetically. The boxes are just as annoying to open. That being said, all of the AEW figures that I've opened have had one huge advantage over the Mattel WWE product: no annoying ties, bands etc. As much as Mattel will tell you otherwise, these are NOT needed. These figures and accessories seem to stay in place just fine AND are difficult to get out as is.

As much as I admire the modern talent as noted above, I haven't felt as motivated to get "one of everyone" with the AEW figures as I do with WWE. For Series 2 I either wanted each figure or an accessory, thus ordering the set was easier. The lineup includes Dustin Rhodes, "Hangman" Adam Page, MJF, The Lucha Bros (Pentagon Jr. and Rey Fenix), and Jon Moxley. 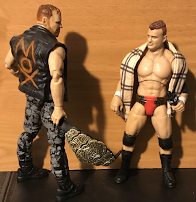 Moxley is my least favorite of the bunch. The figure is inexplicably very tall. He's also just never been a character who's interested me. Add that to comments that he made during his WWE career about it being "weird" to be immortalized in an action figure just wraps it up for me as far as not caring about him. Still the figure serves a purpose as an easy way to get your hands on the AEW Championship belt. Coming in behind Moxley at the bottom of my list is MJF. He simply comes off like a poor man's version of The Miz. The figure does include a cool soft goods scarf and an AEW microphone. The latter has an oddly made thin handle and it's surprising that the figure did not come with an alternate "wrestling" hand for use when not holding rhe mic. Because the handle is so thin, no one else can really hold the mic.

The Lucha Bros are fun with Pentagon Jr. being the sleeper of the entire set, in my opinion. His outfit is perfectly done as are the details to the mask. An alternate hand is included when not using the "posed" hand. Rey Fenix is a solid figure, as well, but sort of suffers when next to his partner due to the Pentagon figure being so much more visually impressive. Lucha Bros vs Lucha House Party? A match made in lucha figure Heaven. 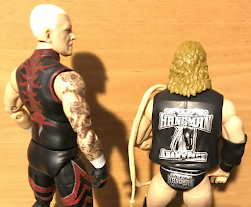 Topping my own list for this series are Dustin Rhodes and Adam Page. This is really only the second action figure in nearly thirty years to be marketed under the name "Dustin Rhodes." He's very tall, as Dustin is, though I'm not sure that he isn't a tad too tall here. The likeness is great and I have full confidence that once Jazwares branches out into legends figures that we will receive a proper "classic" figure of "The Natural." (Tony Schiavone, too, while I'm making requests) Page is the type of figure that will make me a fan of the wrestler because of how cool he is in plastic. The head pops off to easily remove the bandana and an alternate hand is again included here. Page is likely going to be one of the top AEW stars going forward and there is already another figure for him in the pipeline. 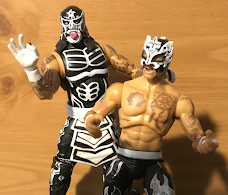 Overall, the AEW line is faring quite well. They're impossible to find in stores (even with Target beginning to stock the line) and sell out fast online as well. The company seems keen on pumping out as much product as possible, but seemingly due to folks at the top there is still a weird obsession on making "limited" figures which do nothing but upset collectors and kill toy lines in the long run. Also, while I've not had any issues yet, I do have concerns about how well the materials used will hold up. Occasionally one will feel a bit breakable while posing. Hopefully this and scale concerns can be addressed in the future.

As always, the way to go is ordering. With popular characters like Luchasaurus and Jungle Boy coming soon, it's the only way to go. The question now is, which wrestling figures are truly...Elite?