Highlight: The Living Legend Is Still Hero To 'Da Burgh... 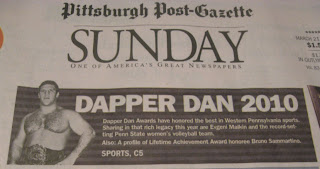 As I type this, "The Living Legend" Bruno Sammartino is collecting yet another accolade celebrating his life and career. Tonight, right here in Pittsburgh, the hometown of both Yours Truly and The Champ, Mr. Sammartino is receiving the 2010 Dapper Dan Lifetime Achievement Award. Dapper Dan Charities is a decades-old local organization which celebrates and sponsors local athletics. For many years, celebrities from around the globe attended the event, but this year's event will be held high above all others to many wrestling fans.

Bruno has been all over the local media for the past week, and rightfully so. Bruno's called Pittsburgh his home since his days as the world champion and is a true sports deity among Pittsburghers about 45-years-old and up.

That isn't to say he doesn't have younger fans, too.

I grew up knowing more about Bruno than most kids watching WWF (and later WCW) wrestling in the '80s and early '90s. While most just thought of him as an announcer or special guest referee, I heard many a tale, from my elders, of his glory days in the ring. Especially remembered were his days on "Studio Wrestling," the title of the local weekly wrestling program. To my family and families all around the northeast, Bruno was the ultimate link between the '60s and '70s northeast wrestling and the product starring Hogan, Flair, Savage, and Sting.

Sadly, that link came to an abrupt end when Bruno decided to take an opposing stance of the then-current product. Even when he later associated himself with the NWA/WCW, you could sense he truly wasn't feeling it. The sport he long held the crown of was long gone.

Bruno's feelings towards the wrestling/sports-entertainment product of the '80s to present has long been documented elsewhere. That's not the point of this entry. Instead, I want to briefly honor the man who battled Gorilla Monsoon, Killer Kowalski, George Steele, and Hans Mortier. I want to remember the man who captured the heart of "Ringside Rosie" and so many other fans not just here in Pittsburgh, but in the northeastern United States and beyond. I want to maybe make just one more "younger" fan know why so many baby boomers will always remember Bruno as "The Champ." 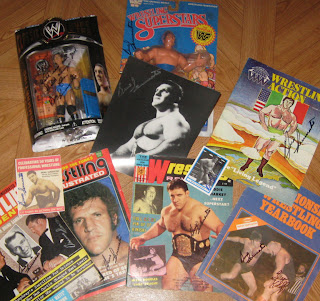 Above is a sample of my collection of autographed Bruno memorabilia. While we here in Pittsburgh are lucky enough to have any number of signings from The Living Legend each year, it still makes me smile when I see fans in other parts of the country wildly approving of Bruno coming to their area. It would give any Pittsburgher a sense of pride.

The black and white photo in the center is Bruno's favorite photo of himself over the course of his career. The Wrestling Revue magazine just below it happens to be my favorite Bruno collectible. 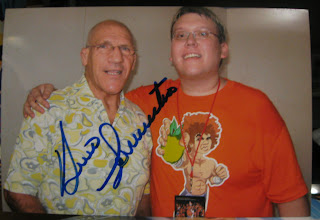 I would be remiss if I did not mention the passing of another wrestling legend and Pittsburgher this past weekend. Baron Mikel Scicluna, '60s and '70s WWWF star, passed away at the age of 80. While a notorious, foreign object-wielding villain in the ring, Scicluna was known to be a great man in the real world. 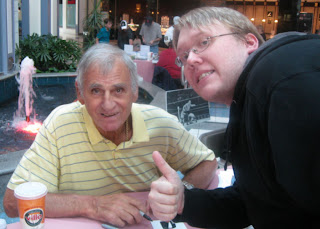