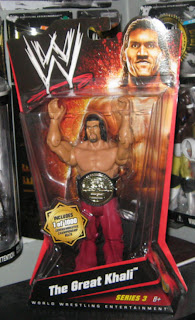 Okay...so I'm not CRAZY about the Mattel figure line, but any smart collector wouldn't turn down a limited figure.

Many of the new Mattel WWE figures have been released in special limited editions with "Commemorative Championship Belts" limited to 1,000. The figures, which retail for around $10, have proven to top out on the secondary market at around $30 a pop. Nothing too pricey, but in my opinion, nothing that desirable either. 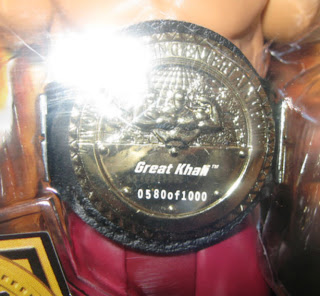 The belts are huge, unlike any real belt (they're said to be designed after the Backlund-Sheik-Hogan belt, and there is a passing resemblence) and they're HUGE on most figures. At least I stumbled upon the one that the belt, due to it's size, looks decent on. It's also one of the rare figures, in my point of view, that Mattel has gotten the likeness pretty close on.

Don't get me started on their Jack Swagger figure.

So I did indeed find one of these, randomly, at a Wal*Mart. What really struck me, is that it was obvious from the selection that many figures from the same shipment had been purchased before this one. So while these are limited, possibly from the reasons I listed above, they just aren't that desireable.
Posted by J\/\/ at 8:46 PM

Hey great blogsite. I saw some of your stuff on FB, too. If you are interested, I'd like to run a post on you (with a pic of you and one of the wrestlers) on my site, like I have done for others, including today's. Check it out and let me know...www.JohngysBeat.blogspot.com.

Can you shoot me an email when you get a chance?
Thanks.
Johngy1@aol.com