In January of 2003, Jakks released to the public what would be their most enduring style of wrestling figure. The "Ruthless Aggression" figure series, named for a phrase coined on WWE television the previous year, featured a style that met the needs of both collecting groups. Kids had a figure that was easy to play with and enabled them to recreate their favorite wrestling moves. Collectors had a figure that was great to look at and nicely represented their favorite stars. The style also carried over into the legendary WWE Classic Superstars figure line.

When Jakks took over the TNA figure license beginning in 2010, the majority of the figures were released in the "Deluxe Aggression" style. These figures are slightly larger and have a bit more articulation. While the Deluxe figures have a large fan base, many collectors prefer the Ruthless figures due to having seven years worth of WWE characters (and countless Classic figures) in this style. 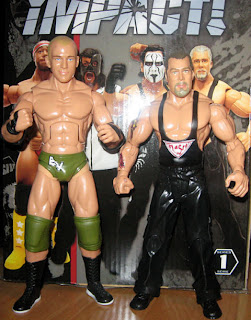 Jakks Deluxe-Style Eric Young &
Ruthless-Style Kevin Nash
To appease this group, Jakks announced that not only would the Legends of the Ring figure series be done in the "Ruthless Aggression" style, but that a series featuring current TNA stars to be sold at (then unnamed) pharmacy and grocery store chains would be produced this way as well. 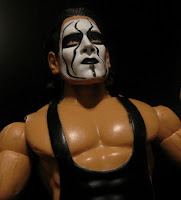 Ring series. This week, Jakks announced that the second series would not be produced due to an alleged lack of interest from collectors. It has been said that these and other Legends figures (Raven and Shane Douglas have been mentioned) will be worked into future regular TNA figure series while retaining the Legends packaging. I would not hold my breath.

Despite this setback, the other promised series of "Ruthless" style figures have indeed been released. An exclusive to Walgreens pharmacies, a six-figure series including Sting, Kevin Nash, Abyss, Kurt Angle, Jay Lethal, and Suicide has hit stores as part of the chains Christmas toy offerings. 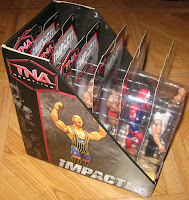 Dubbed "Ruthless Impact" by collectors, the six-figure set seems to be showing up as one set per store. It is unknown if the figures will be replenished as the holiday season nears. Thus far, the figures have shown up individually carded and sold from a graphically-collectible cardboard display box. Since there is one of each of the six figures to each display box, many collectors have obtained the boxes to display the figures in.

Dating back several years, Jakks has had a long history providing many smaller retail chains with exclusive figures. At times, these figures have suffered from less detail than their counterparts sold at regular toy retailers. This difference

does not continue with these figures. Characters such as Abyss and Kevin Nash feature great detail on their tattoos while Jay Lethal, clad in his "Black Machismo" attire to pay homage to "Macho Man" Randy Savage, even has "Machismo" on the back of his tights.

While the figures do not feature realistic scale, the same can be said for the "Deluxe" versions sold at mass retail. Scale is a feature that is difficult to produce correctly in order to provide a consistent product. For a good example of this, check out Mattel's figure releases of Rey Mysterio with a pea-sized head.

In addition to the display box, the cards are nicely designed with bubbles that are firmly attached. Issues have arisen with the first series of Deluxe TNA figures to hit retail regarding poor package manufacturing. Of note is the use of Suicide's "symbol" rather than the name "Suicide" on both figure and card. This is, no doubt, due to TNA and Jakks not wanting to release a children's toy using a controversial word. While the argument can be made that the child will know the name regardless from TNA television, I believe the omission is more to avoid problems from interest groups that target such matters.

It will be interesting to see how the collectiblity of this set rises or falls in the near future. 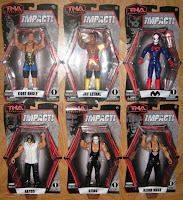 Collectors have been scouring Walgreens stores nationwide to find this set which has just begun to show up. If the current trend of one of each of the six figures PER Walgreens store continues, coupled with the price point of three of the figures for $13.98 (or about $28 for the set), things in the TNA collecting community could get interesting this holiday season. Add to the fact that the Ruthless-style Legends series has been cancelled for all intents and purposes, we may be seeing the end of one of the longest lasting figure-styles in wrestling toy history.
Posted by J\/\/ at 9:50 PM

If that Raven figure gets pulled, Big Chad riots...