There is no holiday better fit for the world of professional wrestling than the one that falls on the 31st of October. Since so many heroes and villains of the ring wars "dress up" to "scare" their opponents and even the fans, it's no wonder that countless Halloween costumes over the years have been inspired by the likes of Hawk, Animal, and even...Hulk Hogan.

Keeping with the theme of memorabilia, it's often the more colorful or bizarre grapplers that make for a better action figure or trading card. While many purists would prefer a wrestler in black tights with arms outstretched in a grappling position, others just live for the face paint, leather, and other outlandish qualities that so many Halloween-esque stars have had. The following will be a look at some of those stars and other "scary" situations from the squared-circle.

Before getting to the grapplers themselves, there's no greater connection to "All Hallows Eve"

and professional wrestling than the WCW pay-per-view event called Halloween Havoc. From 1989 to 2000, Havoc was always one of the most anticipated yearly WCW events, usually due to brutally bizarre gimmick matches. The first event featured an electrified steel cage main event pitting Sting and Ric Flair against Terry Funk and The Great Muta. Four legends in their own right, the teams were joined by the late, great Gary Hart and special guest referee Bruno Sammartino.
While early stars such as Pampero Firpo, Maurice "The French Angel" Tillet, and even The Sheik certainly qualify as spooky stars, it wasn't until the '80s that the grotesque were brought out front and center. The Road Warriors and Kamala highlighted many magazine covers during the "Decade of Decadence," with the March 1984 Pro Wrestling Illustrated cover perhaps being the most famous in the magazine's history. The cover, featuring Hawk and Animal illuminated in "horror lighting," was even chosen by the magazine as one of its ten best.

While WCW had Halloween Havoc and The Road Warriors and Kamala were products of the territories, no one can deny that the WWF/WWE has had the craziest cast of characters come through its rings. 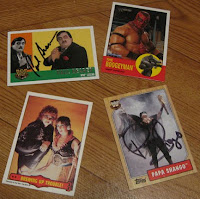 The power of Paul Bearer's urn, the worm-eating maw of The Boogeyman, and the vomit-inducing powers of Papa Shango are just a few samples of the "supernatural" happenings to come from Stamford, Connecticut over the years. Even women's wrestling legend The Fabulous Moolah broke out a smoking cauldron and that pesky "horror lighting" along with her charge Leilani Kai.

The Road Warriors did indeed cross through the WWF in several stints before Hawk's death in 2003, but one WWF-born tag team continues to smear their face paint in rings throughout the world to this day.

"Here Comes The Ax...Here Comes The Smasher..." In 1987, Demolition were looked at as Road Warrior knockoffs. As the weeks and months progressed, Bill "Ax" Eadie and Barry "Smash" Darsow proved that they were far more. Taking nothing away from Hawk and Animal, Demolition carved out a style all their own, combining great brawling with excellent wrestling 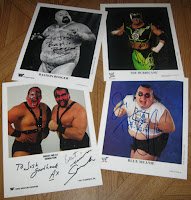 skills. While the debate over which team was better will forever go on, the teams both hold their place in the history of wrestling...and intimidation!

But what about the superhero powers of The Hurricane, hideousness of Bastion Booger, and hilarity of ECW original The Blue Meanie? All worthy contenders showing different sides of the "Wrestling Spooktacular" spectrum.

Events. Tag teams. Comic book heroes. Meanies. They all fit this category nicely. But one wrestler truly deserves to be kept for last.

The Lord of Darkness. The Phenom. The Reaper. A character that probably wasn't intended to last longer than a year or so, much less twenty. 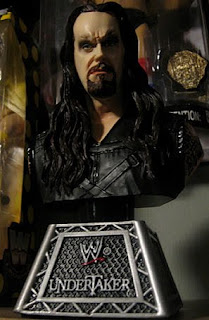 The Undertaker. What more can be said that hasn't already been written? Few superstars have captured generations of fans as Taker has. A comparison to Andre the Giant would not be out of the question in terms of being on top of the game for such a length of time. Rolling into his 21st year in the WWE, Taker continues to cement his legacy as one of the best "big men" in the game, and without a doubt the king of "The Wrestling Spooktacular."

I hope you've enjoyed this look at some the most bizarre competitors, events, and concepts in ring history. I could not include everything or everybody, so let me know if you feel your favorite was omitted. Happy Halloween!
Posted by J\/\/ at 1:42 PM