On this most political of days...The State of Collecting Address

When has wrestling memorabilia been a factor discussed in a political election? Without getting into specifics (you can get politics elsewhere on the net), it's an amazing but true fact. That point, coupled with the fact that I haven't discussed trends in recent weeks, lead us to have our first annual...State of Collecting Address.

I've been receiving a lot of feedback lately on current trends in wrestling memorabilia and current products. While the product itself is nowhere near as hot as it was ten years ago, there is still a ton of new memorabilia being produced. A lot of that can be credited to the WWE's current kid-friendly direction.

Without a doubt, the Mattel-WWE partnership has shown the biggest boost WWE has ever given one of their licensees. While many products have been seen on WWF/WWE television over the years, it has usually been items sold directly from the company. Items that were strictly sold in stores have mostly been shoved to the back burner.

Yes, the LJN and Hasbro action figure lines were frequently shown in the background on WWF programming, but Mattel's line has received the true red carpet treatment.

While I have not been shy with my varied feelings on the line, it's no secret that the figures have been a huge hit with collectors of all ages. Going into 2011 with long-awaited figures such as Randy Savage, Ultimate Warrior, Sheamus, the Nexus, and even The Von Erich's, Mattel should have no problem keeping their momentum. The recent announcement of the first ever Magnum TA figure for Mattel's WWE Legends line only adds to their good outlook.

Mattel's Dusty Rhodes & Drew McIntyre vs Jakks' Suicide & Sting
Jakks, former WWE licensee now under contact to TNA, has disappointed some collectors. While much of the product that the company has released this year has been quality, slow releases and cancellations of some very anticipated products produces a large question mark in forecasting their 2011.

Their Legends of the Ring figure line, despite getting off to a great start in stores, has been all but dissolved. It's been said that some figures slated for release in the series will be integrated into the basic TNA figure line, but it seems that highly anticipated figures like Jim Cornette and Terry Taylor will never see the light of day.

Despite slow releases and delays, the basic single and tag team lines have done very well. Inclusions of stars such as Jeff Hardy, Mr. Anderson, and D'Angelo Dinero as well as Knockouts Velvet Sky, Angelina Love, and Daffney should continue to keep the line afloat.

Figures aren't the only collectibles out there and nor will we pretend that is the case. A couple of months ago I discussed the future of wrestling trading cards. Both companies are in good hands with the Topps WWE and TriStar TNA products. Both Topps and TriStar have a full grasp on how to release product in the same vein of other sport card lines. The releases have been wonderfully marketed to both wrestling and trading card collectors in general, which is why I believe the product continues to fly off shelves. Add that to the fact that, at $1.99 per pack, cards are still an item that "Johnny WrestleManiac" can convince mom and pop to buy on the weekly trip to Target.

Printed media is still in the game as well. WWE churns out two regular publications per month, as well as countless special issues covering individual stars, events, and even a Divas Calendar magazine. TNA has yet to venture into the field of magazines. With the popularity of their program book sold at live events, this is an avenue TNA may be wise to consider. Their program is a very well-done publication full of high-quality photography. Specials on Jeff Hardy and the Knockouts would be obvious high-sellers. 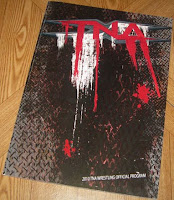 TNA 2010 Program
The legendary Stanley Weston wrestling magazines can also be found at newsstands nationwide. Pro Wrestling Illustrated and The Wrestler/Inside Wrestling are still the longest running wrestling magazine titles. Still featuring the best writing and photography covering the industry, the titles have kept with the times and feature the best in-depth analysis of the business. PWI's annual "Greats of the Game" issue, to be released within the next week, features a Bret Hart career overview put together by yours truly.

DVDs and video games, always hot sellers around the holidays, are last but certainly not least. All of the WWE and TNA pay-per-view events are released on DVD, often just a month after occurring. Both companies have released compilation DVDs in recent months with WWE's Chris Jericho and TNA's Asylum Years sets getting rave reviews from fans. WWE's release on Bobby "The Brain" Heenan this December should keep old school fans happy for the holidays.

Both companies have also released video games this year, with WWE Smackdown vs Raw 2011 getting the majority of the attention. While the games have changed little over the past few years, fans continue to enjoy playing as their favorite stars and legends. An arcade-style game featuring stars past and present entitled WWE All-Stars is set for a 2011 release.

Prepare your wallets for 2011. There will literally be "something for everyone" in the new year. While the onslaught of merchandise still won't be quite as overwhelming as in the days of the Attitude Era, there is still another wrestling "boom" on the horizon. Whether it comes in the next year or five years from now, its coming is inevitable. These are the times in which virtually anything wrestling, past or present, becomes "hot."

Now is a great time to prepare. A lot of items that were impossible to find at a decent price ten years ago are now readily available. My personal prediction is that vintage magazines, which can now be found for extremely reasonable prices on the secondary market, would be a wise choice to begin with. Issues that once sold for $50-$100 can now be found for $10 or under. As with any collectible, it's all about timing.

It all boils down to collecting what you like. Don't let prices or what another collector else has or covets decide what's in your collection. That Santino figure may be just as exciting to you as a Bruno Sammartino magazine is to me. Simply remember to enjoy what you have and continue to celebrate the sport of kings...