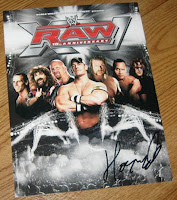 This coming Monday, Raw will be transformed into an "Old School" three-hour special. While we will probably receive a heaping helping of Santino, Nikolai, and Sheiky-Baby in "Foreigner Funnies" and Dusty dancing with the Bella Twins, it's still nostalgia. Nostalgia is something that goes a long way with me.

I'm of the opinion that a wrestling roster should always have a few veterans on hand. If you look back at the wrestling magazines and even films of wrestling from the 1960s and 1970s, many of the stars were ALREADY in their 40s and 50s. While building an entire promotion around seasoned stars may not be a wise venture, I've always felt that WWE should have been commended for including such names as Hacksaw Jim Duggan, Fit Finlay, and Tony Atlas on their lineup in the past few years.

I'm not the only fan who prefers wrestling of yesteryear to the present product, but it does my heart good to know that so many children are fans of today's superstars. Seeing the kids at live events make me recall my days of youth. Those days when the suspension of belief wasn't quite a leap and the thought that maybe, just maybe, that main event grudge match may not go as planned. Maybe these gladiators, in their top position, want that win just a bit more. Maybe tonight things are getting out of hand!

So while I don't necessarily feel the same magic as I once did, I'm glad that so many do. While I

may covet those incredible 60s and 70s magazines, three items in my personal collection are just begging for John Cena's signature. A Nattie Neidhart autograph thrills me just as much as one from her father, "The Anvil." That Sheamus figure about to hit shelves? I'll be bringing one home. 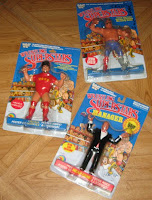 As much as the business changes, a lot of it remains the same. Next Monday Night, hopefully the youngsters will get a proper taste of what they missed...or they'll get Gene singing "Tutti Fruitti."

For more information on the pictures in this entry and many other great wrestling collectible photos, check us out on Facebook: 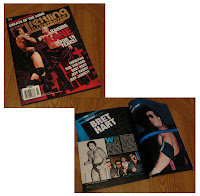 And for a great "new school" wrestling collectible, pick up the January 2011 issue of Pro Wrestling Illustrated available on newsstands now. It's the "Greats of the Game" Collectors Issue featuring profiles on six of the top stars in the industry. Not to mention, the Bret Hart "Career Report" feature was penned by yours truly!
Posted by J\/\/ at 12:03 AM