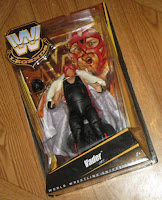 Tis the season for plenty of sales. Both in brick and mortar stores as well as online, the deals are there to be had. The WWE online store has seemingly had sales going on for the past month which included many of the new Mattel action figures.

Not feeling like spending $50-$100 on that new Sheamus figure? (If you ever listen to any 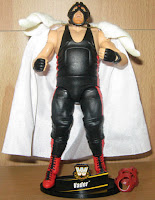 advice from me make it this--wait for Sheamus! He'll be everywhere!) Then how about knocking $4-$5 off those new Mattel WWE Legends? That was one deal that this collector simply couldn't pass up, especially since one of the deals was the new Series 3 Vader figure.

Big Van Vader is a character that translates into action figure form like no other. With roughly around ten different action figures, give or take a few variants, the only disappointing version was the original Jakks "Bone Crunching" figure released in 1997. The figure was thin, looked like a monkey, and was just overall disappointing. Jakks more than made up for their error with their Classic Superstars Vader figures that included the huge helmet which Vader wore in Japan and WCW.

Japanese NOAH, Mattel, & Jakks Vader Figures
This brings us to the new Mattel version. Dare I say, this figure is customizable right out of the package. Between the "White Castle of Fear" cape from WCW to two different removable masks (one black, one red), you can change Vader from era to era all in one figure. 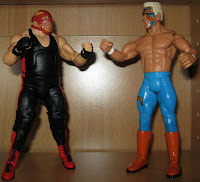 Body-wise the figure is most reminiscent of Vader earlier in his career. Mattel did a fantastic job on capturing Vader's look right down to the gloves. The figure seems a bit less stiff than some of the other Mattel offerings, leading to easier poses depicting Vader just as he was when he was considered the best "big man" in the business.

The packaging is again very nice albeit a bit over sized for the figures. The back of the card discusses Vader's legendary WCW feud with Sting. Match this figure up with the Jakks 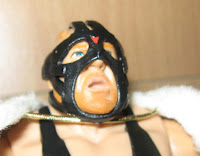 Legends Sting and WCW lives on.

This series also includes Mr. Perfect, Brian Pillman, Davey Boy Smith, The Rock, and Hacksaw Jim Duggan. Vader is probably the best Legends effort put forth by Mattel thus far, and I'm hoping such upcoming figures such as The Von Erichs and Randy Savage only surpass him.
Posted by J\/\/ at 2:32 PM